Organizers: 'This is a community saying, 'we need justice tonight' 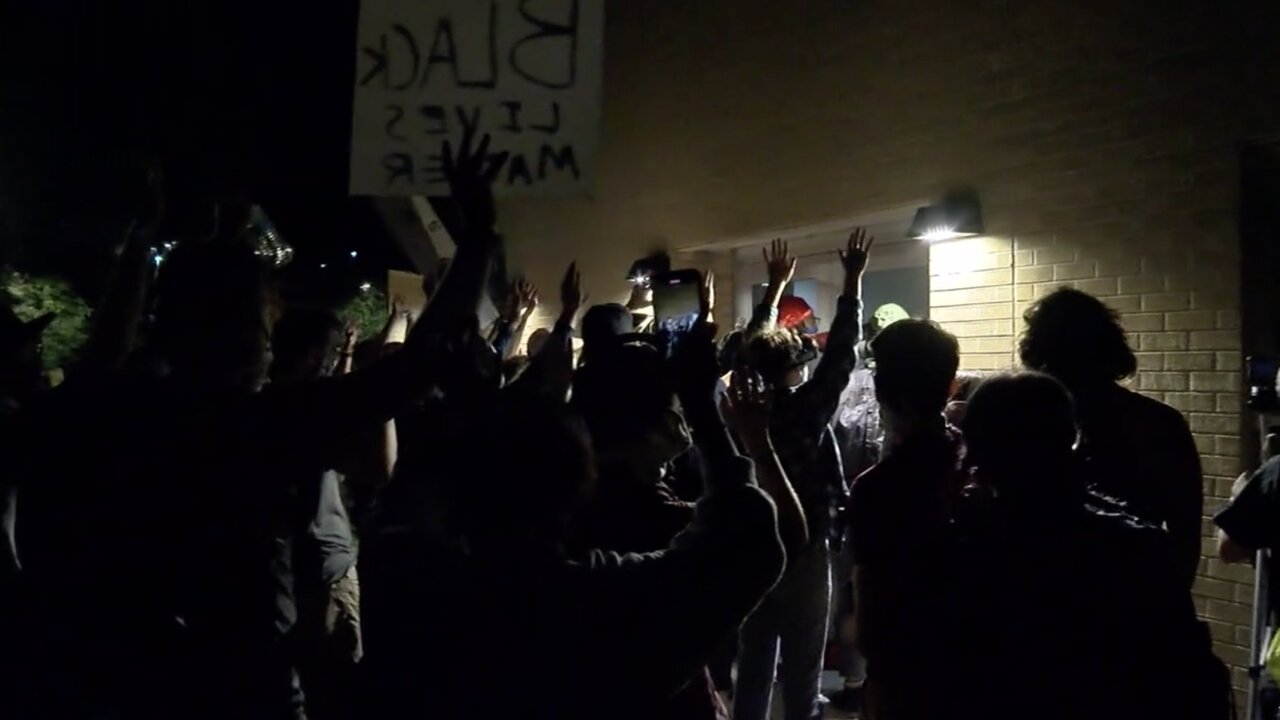 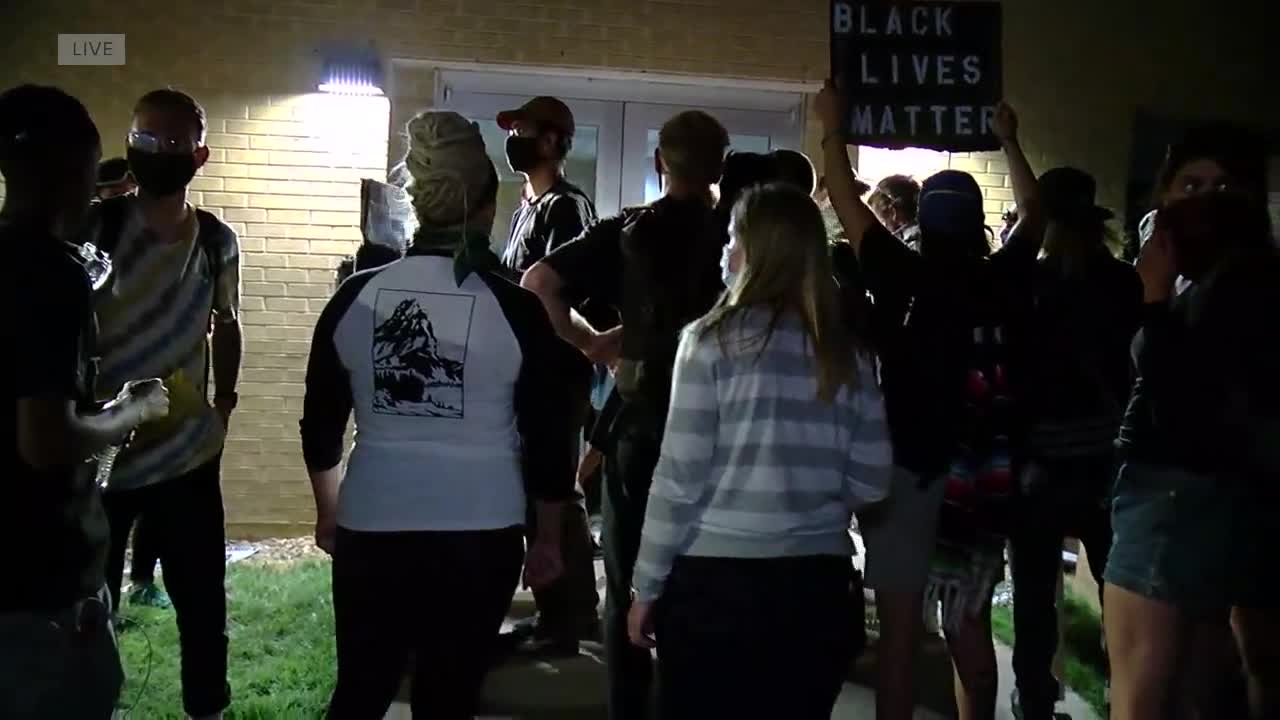 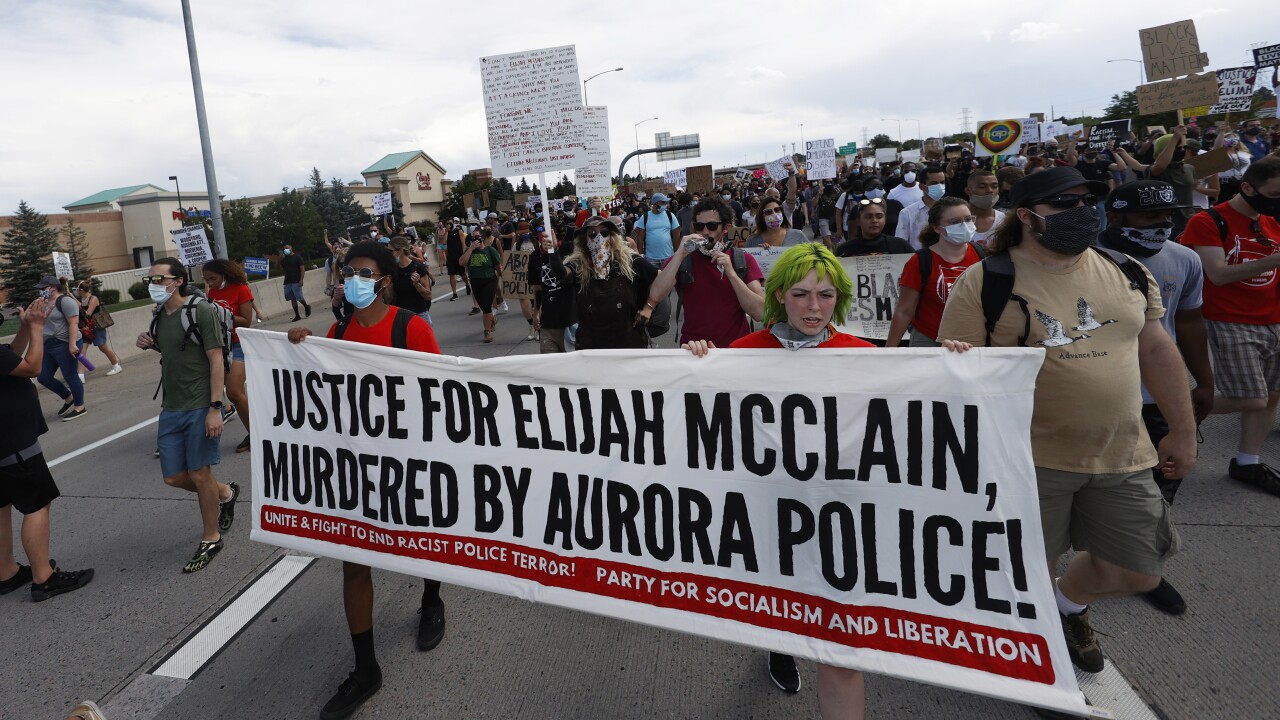 AURORA, Colo. – Hundreds of protesters gathered at the spot where Elijah McClain was violently confronted by police last year and marched to an Aurora Police station to demand the officers involved be fired by the department immediately.

The protest, which remained for the most part peaceful, started at around 6 p.m. at the intersection of Billings Street and Evergreen Avenue. From there, the hundreds calling for justice in the death of the 23-year-old unarmed Black man marched down Colfax Avenue until they reached the Aurora Police Department District 1 building.

But by nightfall, the organizers of the protest – the Party for Socialism and Liberation – said they would occupy the area until officers Nathan Woodyard and Randy Roedema were fired by Interim Chief Vanessa Wilson.

“For ten months Aurora Police Department has shielded Elijah McClain's murderers on their force from facing any form of justice. It was only last Friday, just ahead of a mass march for Elijah, that they pulled the three killers off the streets and put them on paid desk duty,” read the announcement of the protest organized by the Party for Socialism and Liberation – Denver (PSL). “We need to make it clear that this is absolutely NOT enough.”

Last Friday, APD announced officers Nathan Woodyard, Jason Rosenblatt and Randy Roedema had been taken off street duty "because of threats and harassment," according to a police spokesperson. Police said those threats involved phone calls as well as email messages.

The three responded to the area of Billings Street and Evergreen Avenue the night of August 24, 2019 after someone reported a man with a mask walking in the area. That man was McClain, who would eventually die days after he was administered ketamine while the three officers forcibly held him during the arrest that night.

By Friday afternoon, only Woodyard and Roedema remained on the force. Rosenblatt was fired earlier Friday after receiving a photo from colleagues which showed other officers imitating the carotid hold used on McClain the night of his arrest and laughing about it.

Hoping not to have a repeat of Saturday’s violent confrontation with police in which protesters were pepper sprayed after police said some in the crowd started attacking officers, the PSL released a statement, claiming the department was lying about what transpired at the protests last week and making it clear they were there to protest peacefully.

“Let us make it clear to you and your lying pigs this time, we have no intentions to storm the precinct,” the release stated. “If you respond to our peaceful occupation with violence just like you did to the vigil last Saturday, you are choosing to injure protestors (sic) and deny their constitutional rights just so you can keep literal murderers on your payroll. The choice is yours.”

Through most of the night, protesters chanted, sang and danced for McClain. At one point, a speaker read the last words he ever spoke, and the crowd echoed every sentence. And just like it happened during the George Floyd protests in Denver, the group turned on their flash lights to honor the life of the 23-year-old once nightfall set in.

Protesters are still oustide Aurora Police headquarters and just like it happened during the George Floyd protests in Denver, the group has turned on their flash lights to honor the life of #ElijahMcClain.

But the evening was far from over.

At around 11 p.m., Interim Chief Wilson and one of the organizers of the protest had a phone conversation which was broadcast to the crowd using a megaphone. During the conversation, organizers demanded that Woodyard and Roedema be fired from the department, but Wilson argued her hands were tied and that she “did not have the power to fire these officers.”

Speaking exclusively to Denver7, protest organizers stressed they had no intention to storm the precinct or engage in violent attacks against police, but rather remain peaceful outside the District 1 building until their demands were met.

Just before 1 a.m., however, several protesters in the group started creating makeshift barricades with anything available to them – including cars, sticks, and other things – to try and create a perimeter around the District 1 building to prevent officers from leaving.

However, a short time later, organizers gathered the group and explained that their numbers were diminished after a large portion of protesters left to go home and said they didn’t have the crowds to take a stand against police should they be told to leave.

“We want to occupy the space – we are occupying the space – but we told everybody that we were going to the Aurora Municipal Center; we tricked the police, we tricked hundreds of other supporters, we came this way, we have occupied this space, but we don’t want to get anyone hurt, we also have children here right now, so we are considering this a victory, we are going to be back, but there’s not enough of us right now for us to fight.”

It wasn’t until 2:30 a.m. when tensions between police and protesters started boiling up again, with a few remaining protesters confronting police, who had ordered them to disperse.

While tensions were high, Aurora Police, who started to move in on protesters after someone threw what appeared to be fireworks, did not fire pepper spray at the crowd and by around 4:30 a.m., it appeared that the situation was under control as police slowly moved in on the group, ordering protesters to safely leave the area.

By Saturday morning, police said two men had been arrested — both for obstructing a highway/passageway and failure to obey. A third man was detained but released not long after. An APD spokesperson said at least five 40mm less than lethal foam rounds were used, "in response to protestors (sic) shooting the mortar style fireworks towards our officers as they began to untie our west gate."

Police said they were unsure if those foam rounds stuck anyone as the crowd dispersed pretty quickly.

On Tuesday, the Colorado U.S. Attorney's Office, along with several other law enforcement agencies, announced they've been reviewing facts in the death of the 23-year-old Black man since last year for a potential federal civil rights investigation, saying they were aware of the photo allegations which surfaced Monday evening, and were gathering further information about the incident.