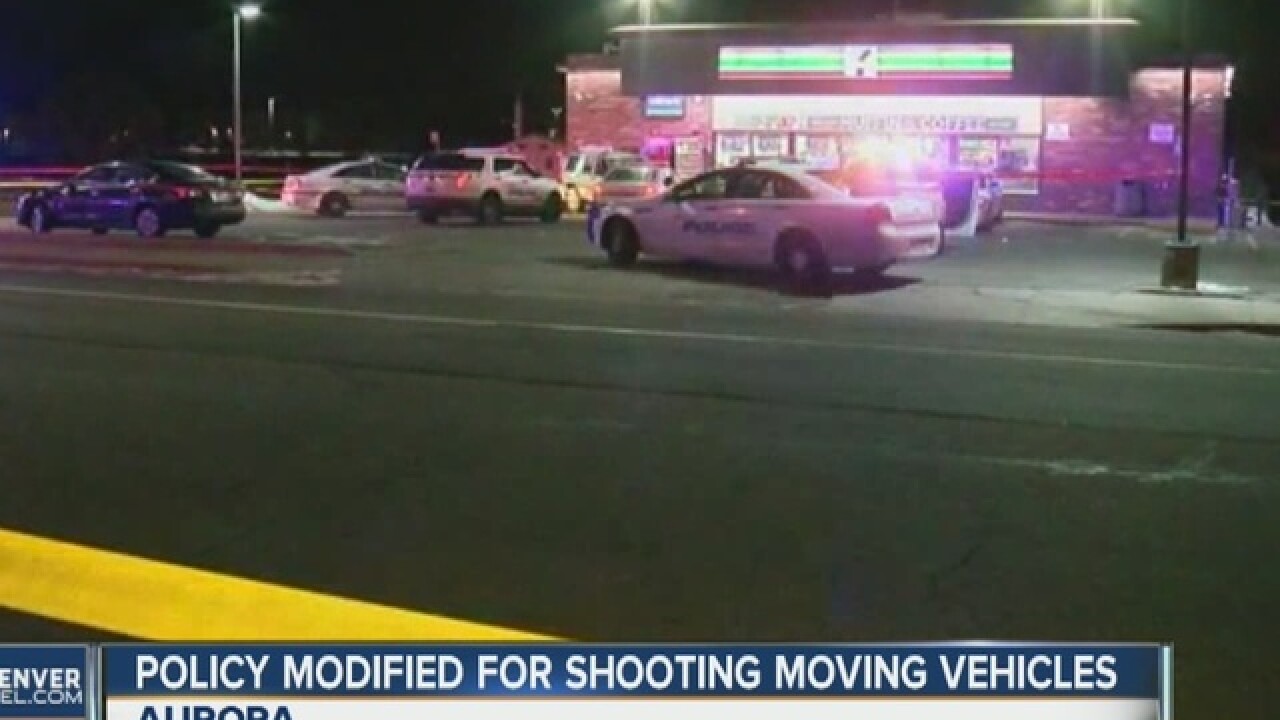 The Aurora Police Department has revised its policy and will now allow officers to shoot at moving vehicles, but only in cases where the driver is directly threatening the life of the officer or another person in the community with means other than the vehicle.

The new policy went into effect on March 1, 2016 and moves away from the previous policy by former police chief, Dan Oates, which stated an officer will not fire at a moving vehicle.

Metz stressed to Denver 7, the revision in policy is not a license for officers to shoot, but instead, a last resort.

"The officers are expected to do everything they can to get out of the way of a vehicle and if there are other ways to disable a vehicle to protect others, that's great," Metz said.

The revision comes in the wake of a December shooting outside a Denver 7-Eleven.  Two Aurora officers broke policy when they shot and killed a suspect as he rammed them in a suspected stolen car.  That case is still under investigation.

In 2011, two Aurora officers were investigated for shooting at a moving vehicle.  One person inside survived, the other was killed.  The District Attorney later cleared both officers of wrongdoing.

"We can't predict every single situation that will come," said Metz.

Aurora's police chief pointed to the mass shooting in San Bernardino, California that left 16 people, including the attackers, dead.  The officers were forced into a shootout with the suspects as they tried to escape in a black SUV.

"Our officers need to know that if they have to make that last resort decision, that they can make it," Metz said.

In June of 2015, the Denver Police Department changed its policy and banned its officers from shooting at moving vehicles after the death of Jessica Hernandez.  The 17-year-old was shot and killed by Denver Police after they said she drove at them in a stolen vehicle.

Policies vary from department to department but shooting at moving vehicles is discouraged by the U.S. Department of Justice.  After reviewing shootings by police departments in Cleveland and Albuquerque, it wrote: "it is difficult to shoot a moving car with accuracy...if the driver is disabled by the shot, the vehicle may become unguided, making it potentially more dangerous."

"Shooting at a moving vehicle is probably one of the most dangerous things that an officer can do and the ramifications can be huge," Metz said. "The action of the shooting at that moving vehicle is going to be closely scrutinized [as well as] the actions [the officers] took that led up to that.  If an officer put themselves in a situation that forced them to have to shoot, then that's going to be on them to hold."