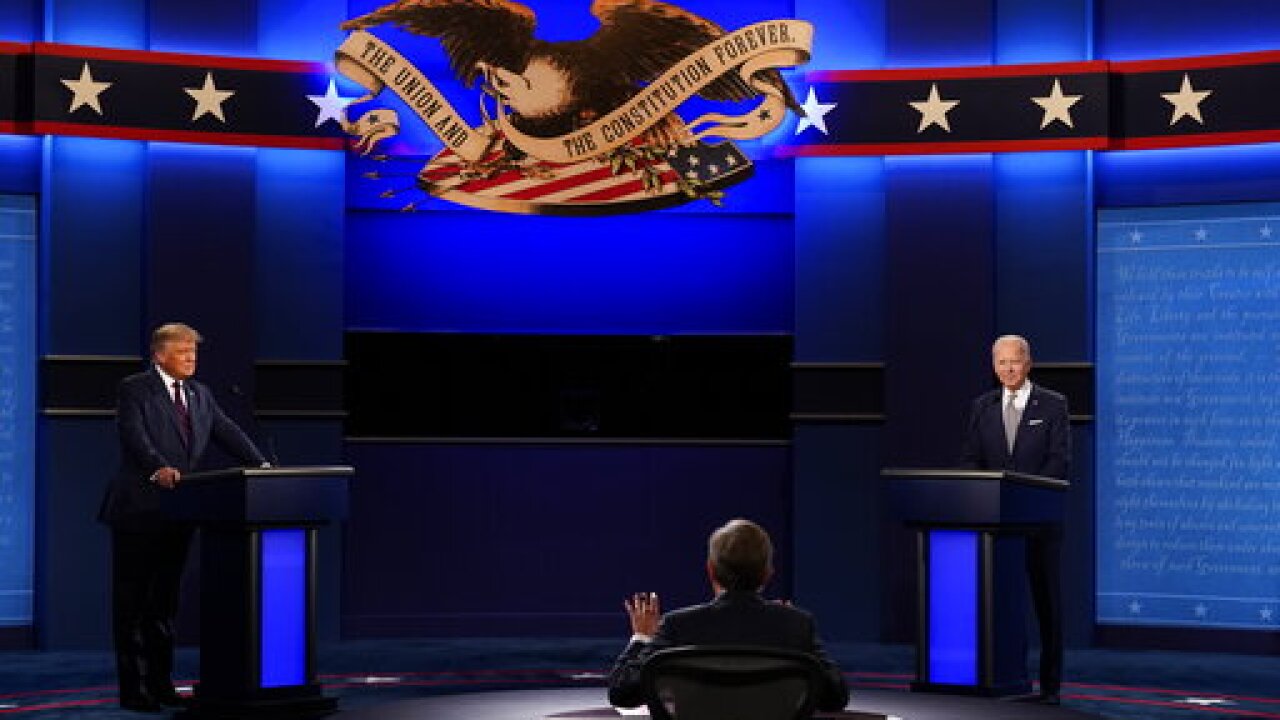 CLEVELAND, Ohio – President Donald Trump and former Vice President Joe Biden are debating each other for the first time.

The 90-minute event will be split up into six 15-minute segments and there will be no commercial interruption.

Each of the six segments will be dedicated to a predetermined topic. The Commission Presidential Debates says those topics will include: “the Trump and Biden records, the Supreme Court, COVID-19, the economy, race and violence in our cities, and the integrity of the election.”

The topics were chosen by the moderator of the debate, “Fox News Sunday” anchor Chris Wallace.

Amid the coronavirus pandemic, the 2020 general election is unlike any other in American history. The threat of COVID-19 has prevented the candidates from campaigning in a way we’ve seen in the past. Trump has still held rallies, but with some precautions taken, while Biden has opted to rely heavily on virtual events and socially distanced speeches.

Tuesday night, Trump and Biden will appear on stage together, but far apart and the candidates are not expected to shake hands. The audience will also be smaller than in years past and all in-house spectators will be tested for the coronavirus.

This debate will provide both nominees the opportunity to shape the narrative of the election, which has largely been focused on the handling of the pandemic, the push for racial equality, and most recently the vacancy of Justice Ruth Bader Ginsburg’s seat on the Supreme Court.

Along with those topics, a bombshell report from The New York Times is sure to be brought up. The “newspaper of record” reported Sunday that it has obtained more than two decades worth of Trump’s tax information. The documents reportedly revealed Trump paid just $750 in federal income taxes in 2016 and 2017. In 10 of the 15 years before that, he paid no income taxes at all, The Times reports. The president has called the reporting “fake news.”

Trump and Biden are getting ready for the debate in starkly different ways. The Washington Post reports that Trump isn’t doing much to prepare, instead relying on his experience at the White House and at rallies. Meanwhile, The Post says Biden is doing more traditional debate prep.

After Tuesday’s debate, the American people will have to wait more than two weeks before Trump and Biden face off again on Oct. 15 at a town-hall style debate in Miami. The final debate will be held in Nashville on Oct. 22.

Election Day is on Nov. 3. Click here for the registration and early voting deadlines in your state.