Trump, when asked about new debate rules on muting microphones, says 'the whole thing is crazy' 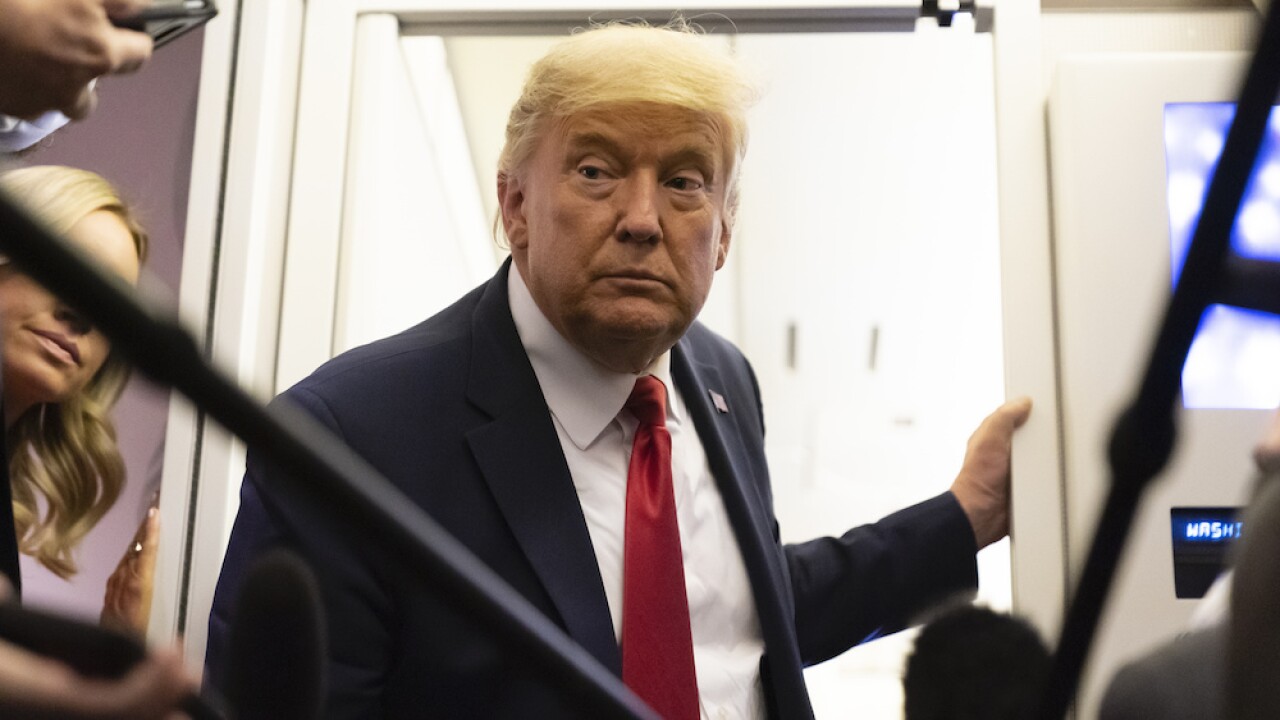 Copyright 2020 The Associated Press. All rights reserved.
Alex Brandon/AP
President Donald Trump leans in to hear a question as he speaks with reporters while in flight on Air Force One after a campaign rally at Tucson International Airport, in Tucson, Ariz., Monday, Oct. 19, 2020, while en route to Andrews Air Force Base, Md. (AP Photo/Alex Brandon)

During an interview on Fox News Tuesday, President Donald Trump attacked the Committee on Presidential Debates, deriding the committee's choice of moderator and rule changes that require candidates' microphones to be muted while an opponent is giving opening statements.

"I think this whole thing is crazy," Trump said.

The committee announced the new rule change on Monday, three days ahead of the final presidential debate between Trump and Democratic presidential nominee Joe Biden.

Trump said those on the committee "are not good people," citing a 2016 debate with Hillary Clinton in which the committee admitted that there were issues with Trump's microphone.

According to the CPD website, the committee selects moderators based on three criteria: "a) familiarity with the candidates and the major issues of the presidential campaign; b) extensive experience in live television broadcast news; and c) an understanding that the debate should focus maximum time and attention on the candidates and their views."

In August, the Trump campaign submitted a list of 24 suggested moderators packed with anchors and pundits from friendly outlets like Fox News, and a few journalist from broadcast networks like CBS, ABC and NBC. None of those moderators were chosen, though Fox News anchor Chris Wallace conducted the first presidential debate.

Trump campaign manager Bill Stepien recently filed a complaint with the CPD, saying that the debate should have more of a focus on foreign policy. The listed topics for Thursday's debate include "Fighting COVID-19, American Families, Race in America, Climate Change and National Security Leadership." Topics are chosen by the moderators alone, and topics were not designated for each event.

The CPD responded to Trump's criticism on Tuesday morning, saying on Twitter that "no debate in 2020 was ever designated by CPD as devoted to foreign or domestic policy."

Kristen Welker announced her topics for 10/22 on 10/16. We agree with Jason Miller, who said on Fox that Kristen is "a journalist who's very fair in her approach and I think that she'll be a very good choice for this third debate."

Trump's interview on Fox News came hours after he told reporters on Air Force 1 that he would participate in Thursday's debate.