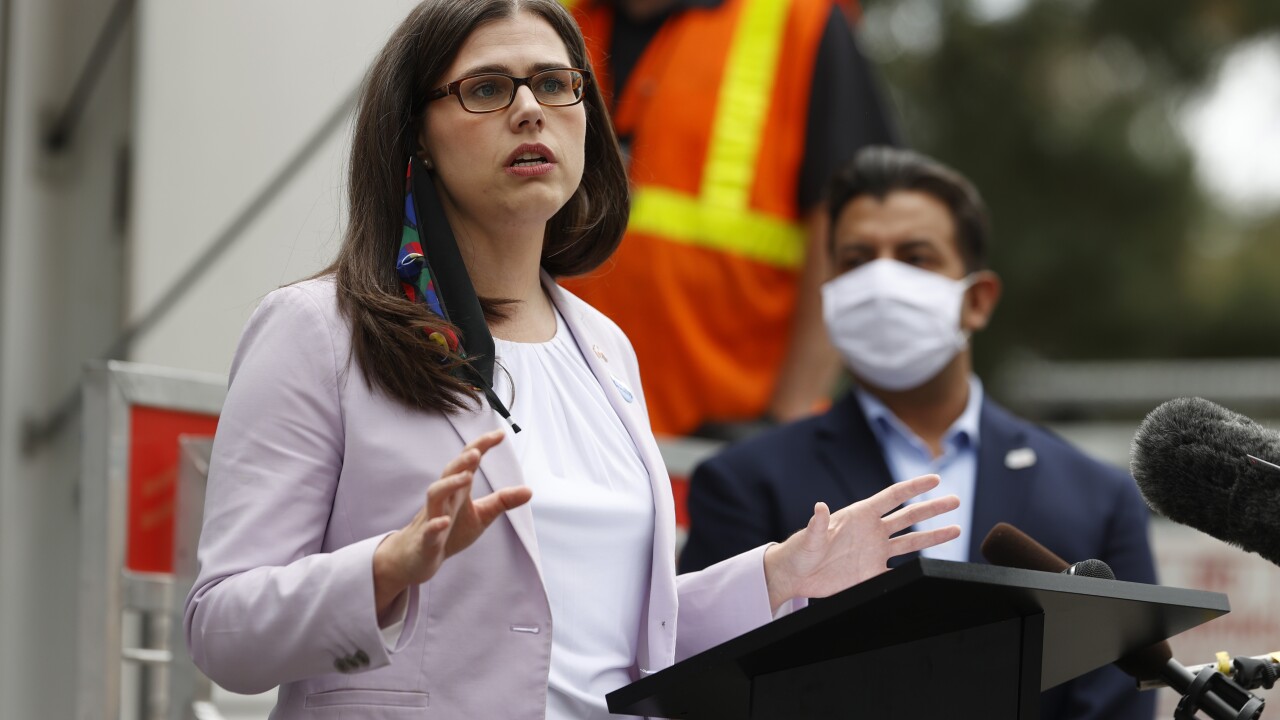 (Copyright 2020 The Associated Press. All rights reserved. This material may not be published, broadcast, rewritten or redistributed.)
David Zalubowski/AP
Colorado Secretary of State Jena Griswold, front, makes a point as Paul Lopez, Denver city clerk and recorder, looks on during a news conference at a mobile voting location in the Swansea neighborhood Tuesday, June 30, 2020, in Denver. (AP Photo/David Zalubowski)

DENVER – The ramifications of a since-retracted story about a Colorado election information postcard continued Wednesday, as Secretary of State Jena Griswold continued to try to correct the record after Colorado GOP Chairman and Rep. Ken Buck, R-Windsor, continued to push for an investigation.

Over the weekend, CBS4 Denver’s news director removed a story originally published last week that inaccurately claimed that a postcard sent to some people in Colorado asking them to vote, which went out to some people who are not citizens or are deceased, per the report, used the voter-roll mailing list used to send ballots out and was urging people to illegally register to vote.

I am removing a story from the @CBSDenver web site which suggested that a mailer asking people in Colorado to register to vote was connected to the state voter rolls. A tweet with a link to the story has been removed. (1/4)

The original story was picked up by conservative outlet Breitbart and was amplified by right-wing media and figures, including Donald Trump Jr., before it was taken off the station’s website.

On Sunday, CBS4 Denver published another story in which Griswold reiterated that the addresses for the postcard mailers that encourage people who are not registered to vote to do so came from a different list than the one used to mail ballots to registered voters.

The postcard also states that a person has to be a citizen, at least 18 years old by Election Day and has to have lived in Colorado for at least 22 days before an election – information that is also spelled out when someone tries to register to vote online or with a paper form.

But that has not stopped the original story from continuing its spread among right-wing media, nor stopped Buck from using the original claims for political purposes.

“I’m surprised you haven’t tried to send ballots to Russians trying to register them to vote in Colorado,” Buck tweeted from his campaign account Tuesday after Griswold responded to an original tweet of his. In that tweet, Buck linked to the Breitbart story and said, “We must get to the bottom of this.”

Buck went a step further Wednesday, writing to Attorney General William Barr and Federal Election Commission Chairman James Trainor in his capacity as a member of Congress and asking that they open an investigation into the postcards, claiming that they were “efforts to register individuals who are ineligible to vote” even though Griswold and CBS4 Denver have already noted that is not the case in their follow-up story and it is clearly spelled out on Colorado voter registration materials that people who are not citizens cannot vote.

When someone goes to the online portal to register to vote in Colorado – which can only be done if that person already has a Colorado driver’s license or ID card – there is a bold and highlighted warning at the top: “It is against the law to knowingly submit false information or to tamper with another person's voter registration information.”

Similarly, at the top of the paper voter registration form, the first question asked is “Are you a citizen of the United States,” followed by checkboxes for “Yes” or “No”. In bold letters next to those boxes, the form says: “If you answered ‘No’, do not complete this form.”

In Buck’s Wednesday letter, he cited the original and since-removed CBS4 Denver report and the fact that Colorado uses a third-party organization to identify unregistered voters as reasons why the DOJ and FEC should investigate.

Griswold responded to his letter by saying he and the Colorado GOP were working to undermine confidence in the election.

“It’s a shame that Congressman Buck and the Colorado GOP are complicit in the President’s efforts to spread misinformation and discredit Colorado’s election model, which is recognized as the gold standard across the country and has resulted in electoral victories for their own party,” Griswold said in a statement. “This partisan, politically-motivated attack from the Colorado GOP is an attempt to undermine confidence in our elections by fear mongering and spreading debunked election misinformation.”

She went on to point out that former Republican Secretary of State Scott Gessler started the program, and her predecessor, Republican Wayne Williams, mailed the postcards as well.

“As in past years, the postcard mailing list is provided by the Electronic Registration Information Center (ERIC), a national bipartisan election organization which uses records from the DMV to help identify potentially eligible individuals,” Griswold said. “The list is compared to other information, such as the Social Security Death Index to remove people from the mailing. The mailing list is not the same as Colorado's voter rolls, as by definition it targets unregistered people.”

Griswold has been on the forefront of pushing back against efforts by President Trump and some Republicans to sow doubts about the upcoming election and the integrity of mail ballots, though Colorado has successfully used them for years.

She has called Trump’s efforts “voter suppression” and settled a lawsuit against misleading mailers sent out by the U.S. Postal Service last month about mail voting.

For more information on voting in Colorado this year, click here for Denver7's election resources guide.