Prop. 116: Colorado voters will decide whether to lower the state income tax, but it's complicated 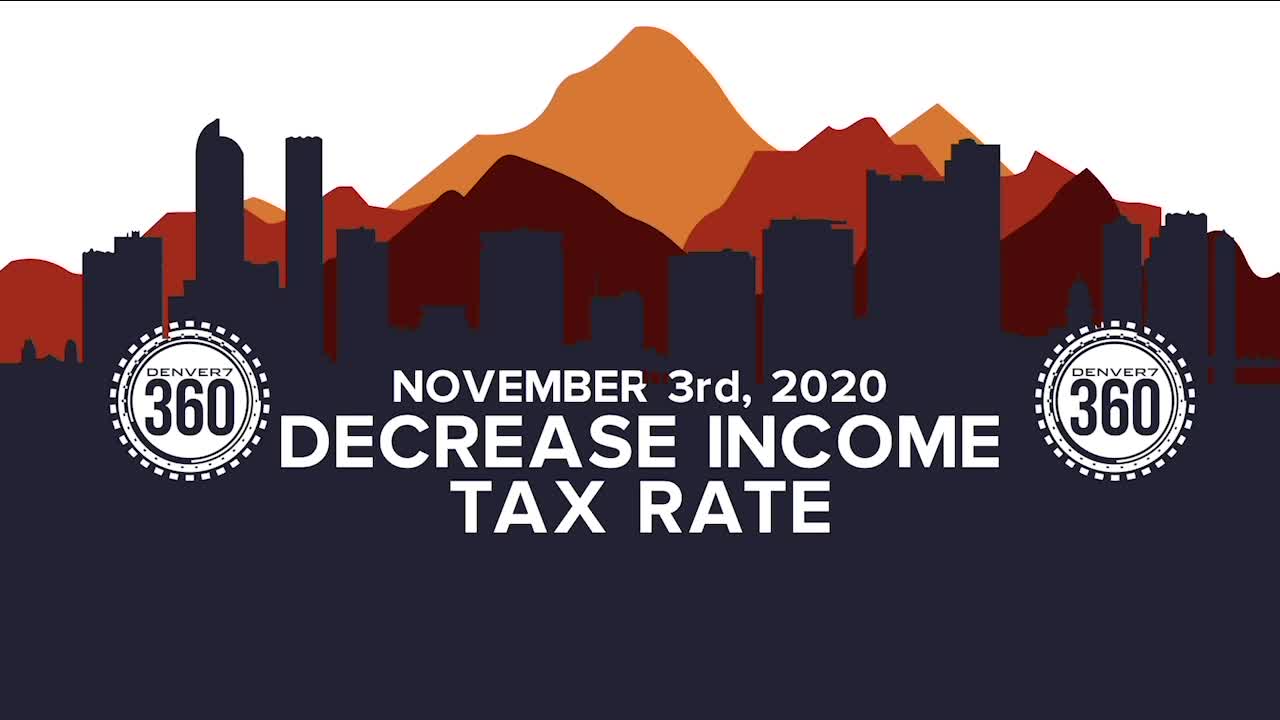 DENVER — Along with picking the president and various federal, state and local lawmakers, on Nov. 3, Colorado voters will also have the chance to determine whether the state’s income tax rate should be lowered for the first time in two decades.

The question sounds straightforward, but supporters and critics of the idea say there is a lot at stake, even for a small tax cut.

What does Proposition 116 do?

Proposition 116 asks voters whether they would like to decrease the state’s income tax rate from 4.63% to 4.55%. Colorado has held the same rate for income taxes since 2000.

Colorado has a flat income tax, meaning it applies to individuals and businesses equally no matter how much or how little someone earns.

According to an analysis by the Colorado Legislative Council in The Blue Book, for someone making the state’s average income of $69,000 a year, the reduction would result in about $55 in savings annually.

However, the measure is expected to reduce the state’s budget by $154 million for the 2021-2022 year, equaling a 1.2% expected drop in the General Fund revenue.

The case for cutting the state’s income tax rate

Supporters of Proposition 116 say it will help families and businesses save money during a difficult time financially, with the pandemic and recession still in full swing.

Sen. Jerry Sonnenberg, R-Sterling, is one of the biggest supporters of the idea. For the past two legislative sessions, Sen. Sonnenberg has run bills to try to lower the state income tax but both died in committee.

Sen. Sonnenberg says even in a recession, he has seen how bloated the state government’s budget is. He believes lawmakers have a difficult time with prioritizing funding.

“They’re going to argue that we’re not going have enough money for highways and we’re not going to have money for schools, yet our legislature will not prioritize education. Even when times were good, you still had a negative factor,” he said. “The only way to solve that is to allow people to keep their own money to be able to prioritize themselves what they want that money spent on."

He believes these tax savings, if approved by voters, will allow businesses to hire more employees and help bring down the state’s unemployment numbers.

On the individual side, families that have a little more money to spend can help stimulate the economy.

“We’re in a recession. We need to do something to energize the economy. People deserve to have a little of their own money left in their pocket, and this helps that,” said Jon Caldara, president of the Independence Institute.

The last time the state’s income tax was lowered was in 2000 by Gov. Bill Owens. During that time, the state income tax rate was dropped from 5% to the current 4.63%.

He points out that the state legislature has imposed numerous fees on people and businesses and is bringing in more money than before with some a newly-passed bill to close tax loopholes.

“This is the tiniest, tiniest of tax cuts. The biggest complaint and I’ve been getting is that it should be much, much more,” Caldara said.

Beyond that, Caldara says the Trump tax code changes in 2018 resulted in people keeping more of their money throughout the year, which means the state was able to tax more of their income. He believes the tax cut would help offset some of that.

“The state legislature should have lowered taxes to make this tax-neutral. There’s no reason why Trump’s tax cut on the federal level should mean a tax increase for you on the state level,” he said.

Even with the $150 million less in the General Fund, Caldara says the state has tens of billions to spend each year and the decrease is a very small portion of its overall budget.

The case against cutting the state’s income tax rate

Opponents of Proposition 116 say it will hurt the state government at a time when it is already struggling financially, which will affect families.

“Coloradans need the services that the state provides now more than ever,” said Rep. Emily Sirota, D-Denver. “We will not have the resources to serve the needs of Coloradans with this kind of a loss.”

In order to create a balanced budget for next year, state lawmakers had to make a series of deep cuts to things like education, behavioral health programs and more.

The state was projecting a more-than-$3 billion deficit as a result of the COVID-19 pandemic and recession.

This proposition could also result in layoffs of hundreds of state employees during a recession when unemployment is already high.

“This idea that if we keep cutting taxes for rich people then it will somehow benefit us all, that’s not bearing out in the microdata,” she said. “I believe Colorado needs a more-progressive tax structure so that the wealthiest among us are paying their fair share, and 116 will only further exacerbate these inequities that we have right now.”

A regressive tax takes a larger percentage from people of lower or middle incomes than from high-income earners.

Meanwhile, a progressive tax means that people who make more money are paying at least the same percentage if not a higher percentage in taxes.

She’s hoping voters will understand that the money from the current tax rate would help provide critical services to families during a difficult time and that by paying a little, the payoff for the state overall would be much higher.

“We are all in this together, and so we all pay our taxes so that we have strong public schools to send our kids to, so that we have roads and bridges to drive on to get to work,” she said.

Despite the fact that Prop. 116 would reduce business taxes, the Denver Metro Chamber of Commerce has come out against the ballot initiative, saying Colorado already has one of the lowest income tax rates in the country and that the current rate doesn’t prevent companies from coming to the state or from expanding their current practices here.

“The tax is not hindering anyone’s success, and yeah, when you look at our state it has serious revenue challenges,” said Kelly Brough, the president and CEO of the Denver Metro Chamber of Commerce.

She believes investing more in the state would encourage more businesses to want to come here or stay here.

“What we have to remind everyone when they vote is there’s a bigger picture than just the dollars that accrue to you. This is our kids’ ability to get a good education and build an economy where they can get jobs that we're bringing here. It’s our transportation system,” Brough said. “Our failure to invest is costing us more every year, and when you look at those kinds of costs, you realize we’re better off paying this slightly increased tax rate instead of reducing it.”

From an employer perspective, the state’s transportation infrastructure is important to meet their shipping needs, and a good public education system is important to attract employees to the state.

Because of this, Brough says keeping the current rate of investment will actually benefit employers more in the longterm than the tax savings.

Despite the potential savings for businesses, the Denver Metro Chamber of Commerce is encouraging people to vote no on Prop. 116.

An analysis of the business impacts

In the run-up to the November election, different policy and economic research groups are taking a closer look at the potential effects Prop. 116 could have on the state.

The Common Sense Institute is one of the groups that has put together a study on the initiative’s potential impact.

“This proposition, if passed, would benefit the private sector, increase employment and stimulate output slightly, but at the same time it would magnify some of the hardships that the state government faces,” said Chris Brown, the director of policy and research for the Common Sense Institute.

Like most policies, Brown says this would be a trade-off, and that depending on some factors, like the government’s response to a tighter budget, the private sector may actually grow at a faster rate that helps offset some of the revenue reductions the state is facing.

According to the analysis, the tax cut could result in the loss of roughly 324 jobs or an addition of up to 1,514 jobs depending on how the private sector and state government react.

“There is that immediate effect that I think voters should recognize, but in the long-term, we would expect revenue to rebound,” Brown said.

While the analysis from the Common Sense Institute found some potential for a positive outcome, a study from the Bell Policy Center painted a very different picture if Prop. 116 passes.

The report found that the tax cut, though applied evenly across income levels, would be more of a benefit to the wealthy and would have disproportionate impacts on communities of color.

“One of the biggest things we found, in general, is that by its intent and design, it’s really a tax cut that will very much benefit the wealthiest of Coloradans. Fifty-nine percent of the benefit will go to the top 3% of earners in Colorado,” said Tyler Jaeckel, the director of policy research at the center.

Jaeckel describes Colorado’s tax code as regressive and says Black, Indigenous and people of color are disproportionately overrepresented in the tax burden.

His study concluded that this reduction will increase the regressivity in the state’s tax code by reducing one of Colorado’s more progressive taxes and putting a greater emphasis on regressive tax structures.

“You’re cutting one of the few areas of the tax code that does have some progressivity to it,” Jaeckel said.

Beyond that, he says while the tax cut would result in minimal savings for most Coloradans, it could have devastating impacts on things like public schools, further hurting middle class families and communities of color.

“For the average Coloradan, this is a raw deal. You lose a far greater amount in investments in your communities, your teachers, your schools than you gain getting back,” he said. “What voters really have to decide is do I care about having teachers in my community that are being paid fair, or $37. Do I care about having roads that are fixed and actual progress on that for $37?”

Part of the reason Jaeckel says Colorado’s education and transportation infrastructure are in poor shape funding-wise is because the state made deep cuts during the previous recession that it has yet to make up for.

The legislature did take some steps this previous session to make up funding, like House Bill 1420, which closed some tax loopholes for businesses. However, Jaekel says it’s not enough to make up for all of the previous cuts.

He does not believe that this measure would help stimulate the economy in a significant way nor discourage businesses from coming here.

On November 3, voters will have the final say on whether to approve of a tax cut. Historically in recent years, Colorado voters have been reluctant to pass statewide tax increases.

However, a tax decrease could be a different story.

Click here for information about all 11 of Colorado's statewide ballot initiatives for November.