Judge blocks changes at USPS that slowed mail, which Colorado and coalition of states sued over 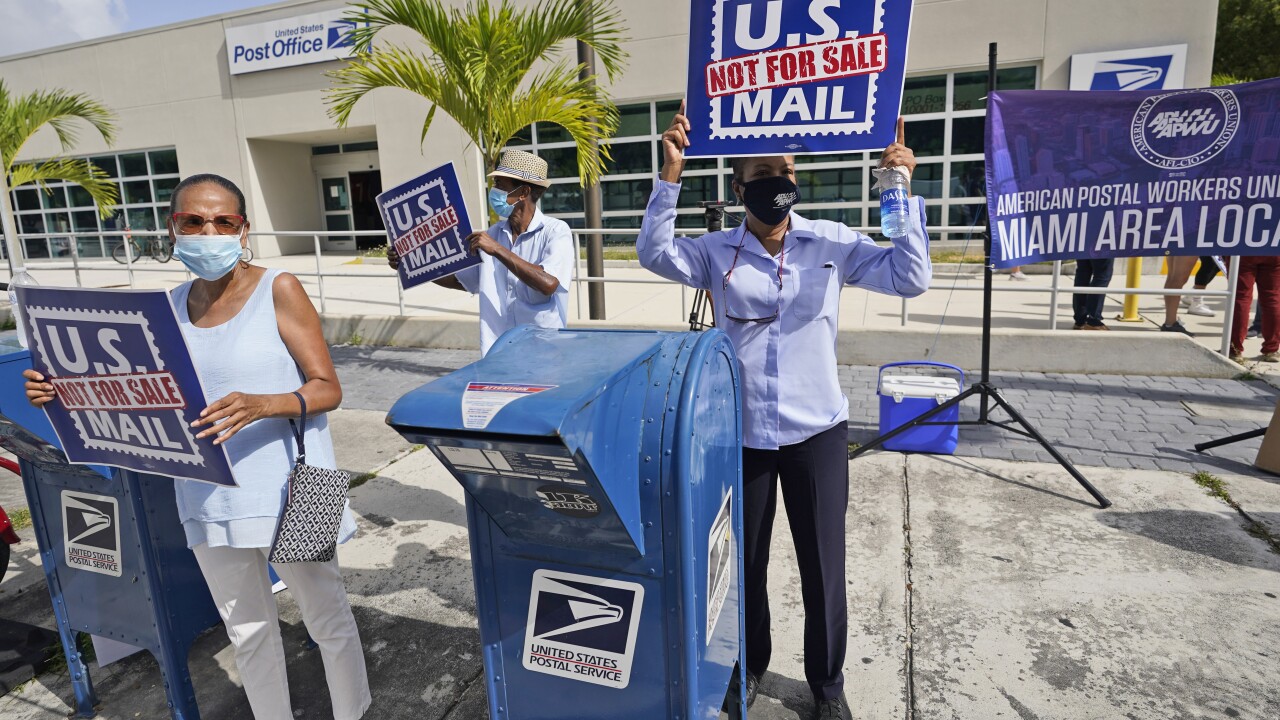 (Copyright 2020 The Associated Press. All rights reserved. This material may not be published, broadcast, rewritten or redistributed.)
Wilfredo Lee/AP
Protesters demonstrate during a "National Day of Action to Save the "Peoples" Post Office!" outside the Flagler Station post office, Tuesday, Aug. 25, 2020, in Miami. The pandemic has pushed the Postal Service into a central role in the 2020 elections, with tens of millions of people expected to vote by mail rather than in-person. At the same time, Trump has acknowledged he is withholding emergency aid from the service to make it harder to process mail-in ballots, as his election campaign legally challenges mail voting procedures in key states. (AP Photo/Wilfredo Lee)

DENVER – Colorado and a coalition of other states have prevailed in a federal lawsuit filed last month that challenged changes at the U.S. Postal Service made by the new postmaster general that the states argued undermined both the postal system and mail voting this November, Attorney General Phil Weiser said Thursday afternoon.

In his written order issued Thursday evening, Judge Bastian wrote that the plaintiff states “would suffer irreparable harm absent preliminary injunctive relief” and called the actions by DeJoy and the USPS “voter disenfranchisement.”

“It is easy to conclude that the recent Postal Services’ changes is an intentional effort on the part of the current Administration to disrupt and challenge the legitimacy of upcoming local, state and federal elections, especially given that 72% of the decommissioned high speed mail sorting machines that were decommissioned were located in counties where Hillary Clinton receive[d] the most votes in 2016,” he wrote.

He said that DeJoy’s actions went directly against Congress’s “intent to insulate the management of the Postal Service from partisan politics and political influence” and that plaintiffs had shown the effects of the changes went beyond the election.

He also called the defendants’ claims that nothing had changed this year “simply not true” and cited various examples and agreed that any changes have to go through the Postal Regulatory Commission before they are made – something Colorado and the other plaintiffs argued.

He wrote that the nationwide preliminary injunction was necessary.

“Indeed, if there ever were a mandate for the need of a nationwide injunction, it is this case,” Judge Bastian wrote. “It is easy to envision situations where the mail needs to cross state lines, for example, residents who are residing out of state and want to send in an absentee ballot, medications being sent from other states, as well as small businesses who send their products to customers who live in other states.”

The order bars the USPS from continuing to implement the changes announced in July, from moving away from treating election mail in accordance with First Class Mail standards, removing or decommissioning sorting machines, reducing post office hours and making any further changes without consulting the Postal Regulatory Commission.

The order also says that if any postal facility is unable to process election mail this year outside of accordance with the First Class standards due to the removed equipment, it will have to be replaced or reconnected to ensure the USPS meets those previous standards. The court will also have to be notified if a ppostal facility asks said equipment to be reconnected and can overrule the USPS if it denies a request in order to ensure proper delivery.

“I’m pleased that a federal judge has blocked the U.S. Postal Service leadership from continuing with the illegal operational and policy changes they have implemented nationwide that have slowed down the mail and have threatened to interfere with the 2020 election. These drastic changes have already caused real harm to Coloradans and their ability to do business or get their medication through the mail,” Weiser said in a statement.

“Our democracy is at stake and people’s lives are at stake. We will monitor the Postal Service to make sure they are complying with the judge’s order. And we will continue to protect the mail service and defend our state’s ability to manage our safe and easy-to-use vote at home election system so that every vote is counted,” the attorney general added.

Colorado and the 13 other states, including Washington, where the case was filed mid-August, sought an injunction prohibiting DeJoy and the USPS from implementing any operational changes, closing distribution centers, removing mail sorting machines or any other changes that would affect service and rescinding any changes that had already been made. Denver has pledged to deliver all ballots through First Class Mail this year in the wake of the changes.

DeJoy denied in a Senate committee hearing that he had made politically-motivated changes and only had asked that delivery and pickup schedules be more strictly-enforced, though people in Colorado and other states have noticed slow-downs or missing mail, including for people who rely on the USPS for their medications. He has said he would postpone the changes until after the election, but that did not quell the lawsuit.

The lawsuit from the coalition of states argued DeJoy acted outside of his authority in making the changes, saying he did not go through the Postal Regulatory Commission and thus deprived states of their right to comment on the changes that were being sought.

Shortly after notice of the lawsuit filing was made, DeJoy issued a statement saying that hours at post offices won’t change, mail processing and blue collection boxes won’t be moving or going away, mail processing facilities will not be closed, and overtime will continue to be paid.

Colorado officials have been among the most vocal regarding changes at the USPS and President Trump’s push against mail ballots for the November General Election, as Colorado has for years successfully used a mail-ballot system in which the majority of ballots are dropped off at boxes across the state.

Colorado Secretary of State Jena Griswold, who has ardently opposed the president’s push against mail ballots and said he was committing voter suppression, sued the USPS last Saturday over a pre-election mailer that she said is misleading and confusing for Colorado voters because it asks voters to request a mail ballot 15 days before the election. Colorado’s ballots will begin being mailed out Oct. 9 and registered voters do not have to request them.

“I applaud Judge Bastian’s decision to issue a nationwide injunction to stop the U.S.Postal Service from making operational changes that would impact the nation’s elections. According to reporting by the Washington Post, the judge stated that both President Trump and Postmaster General DeJoy have been 'involved in a politically motivated attack on the efficiency of the Postal Service,” Griswold said in a statement Thursday.

A judge granted a temporary restraining order preventing further postcards from being mailed out, but they were already en route to many Coloradans at the time and have showed up in mailboxes this week.

Griswold and other secretaries of state met Thursday with DeJoy to discuss the USPS and the upcoming election. She said DeJoy told the secretaries they should have been given further notice about the postcards. She tweeted that DeJoy “said he disagrees with the president on Vote by Mail.”

An evidentiary hearing in the lawsuit regarding the postcards is set to happen Friday morning in the U.S. District Court of Colorado in Denver.