Explainer: Why the Associated Press called Arizona for Joe Biden 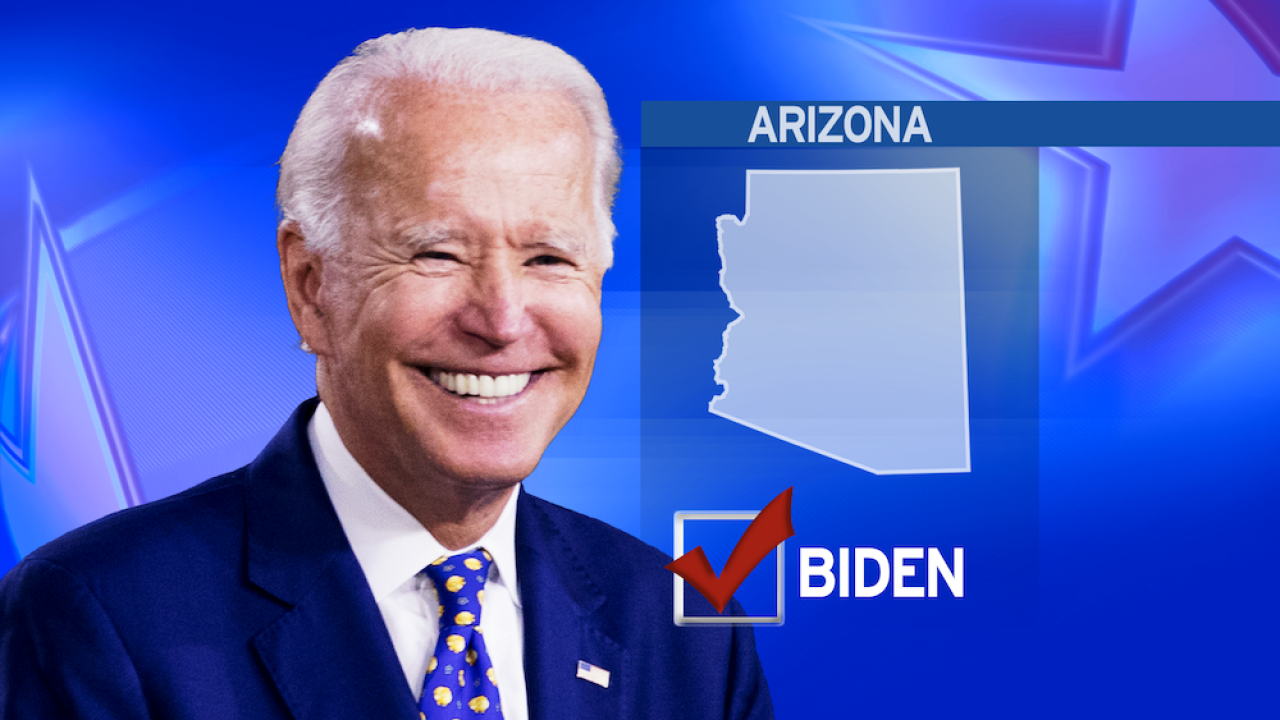 The E.W. Scripps Company is a partner with The Associated Press and has been following guidance from their election desk on 2020 race updates.

Early Wednesday morning, the AP called the presidential race in Arizona for Joe Biden. The state is continuing to count ballots, and in the hours since, President Donald Trump has significantly cut into Biden's lead.

Thursday afternoon, officials said there were about 450,000 votes still to be counted in the battleground state. As of 12:30 p.m., Biden had a 2.35 percentage point lead over Trump, an advantage of about 68,000 votes.

AP executive director Sally Buzbee released the following statement regarding its Arizona projection: "The Associated Press continues to watch and analyze vote count results from Arizona as they come in. We will follow the facts in all cases."

All election results remain unofficial until each state verifies its election count.

Below is the AP's explanation as to how it made the decision to call the state for Biden.

The Associated Press has declared Democrat Joe Biden the winner in Arizona, flipping a longtime GOP state that President Donald Trump won in 2016.

The AP called the race at 2:50 a.m. EST Wednesday, after an analysis of ballots cast statewide concluded there were not enough outstanding to allow Trump to catch up.

With 80% of the expected vote counted, Biden was ahead by 5 percentage points, with a roughly 130,000-vote lead over Trump with about 2.6 million ballots counted. The remaining ballots left to be counted, including mail-in votes in Maricopa County, where Biden performed strongly, were not enough for Trump to catch up to the former vice president.

Arizona has a long political history of voting Republican. It's the home state of Barry Goldwater, a five-term, conservative senator who was the Republican nominee for president in 1964. John McCain, the party's 2008 presidential nominee, represented the state in Congress from 1983 until his 2018 death.

But changing demographics, including a fast-growing Latino population and a boom of new residents — some fleeing the skyrocketing cost of living in neighboring California — have made the state friendlier to Democrats.

Many of the gains have been driven by the shifting politics of Maricopa County, which is home to Phoenix and its suburbs. That's where Biden sealed his victory. Maricopa County accounts for 60% of the state's vote, and Biden ran up huge margins there.

In 2016, Trump carried the county by 4 percentage points, which helped propel him to a win. But two years later, Democratic Sen. Kyrsten Sinema flipped a Senate seat from Republican control by winning the county by 5 points.

When the AP called the race for Biden, he was leading there by 9 percentage points.

Biden flipping Arizona is a sign of Democrats' ascendant influence in the state.

In 2018, Sinema became the first Democrat in three decades to win a U.S. Senate seat in Arizona. Democrats also won three statewide offices and five of nine congressional seats and made gains in the state legislature that year.