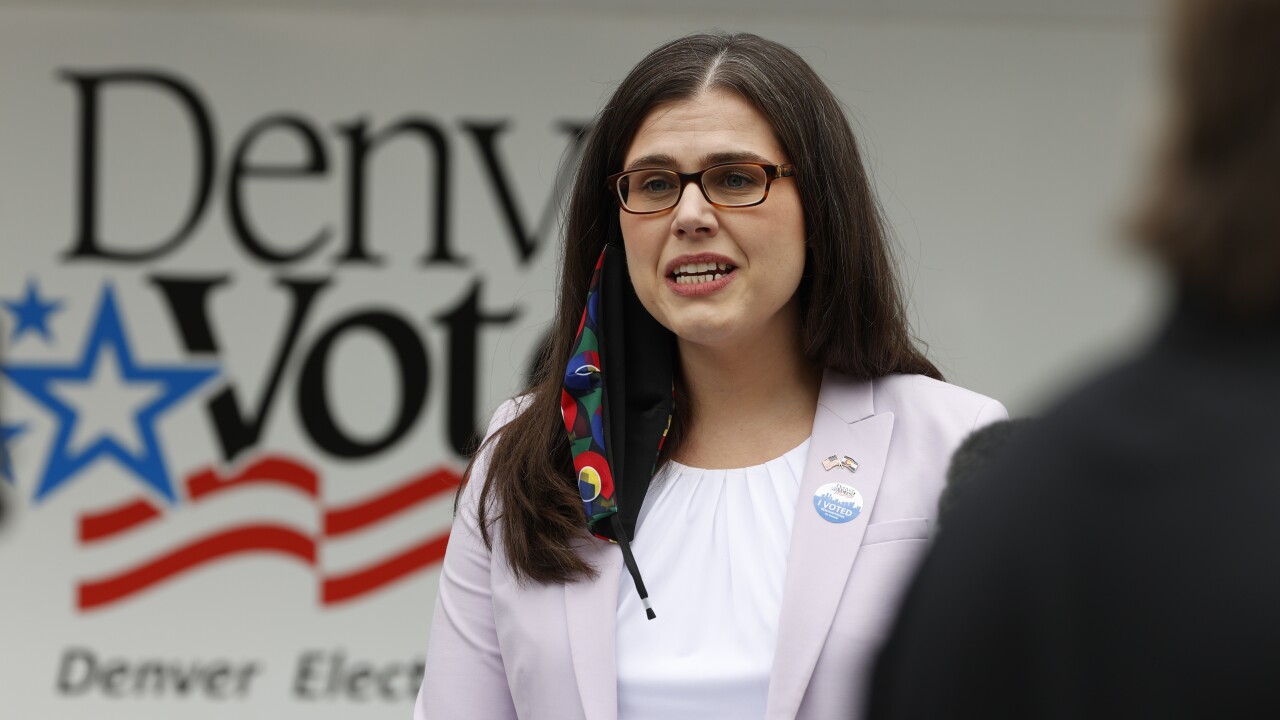 (Copyright 2020 The Associated Press. All rights reserved. This material may not be published, broadcast, rewritten or redistributed.)
David Zalubowski/AP
Colorado Secretary of State Jena Griswold speaks at a mobile location in the Swansea neighborhood Tuesday, June 30, 2020, in downtown Denver. (AP Photo/David Zalubowski)

DENVER – Colorado and the U.S. Postal Service agreed Thursday to settle a lawsuit over pre-election mailers sent to Colorado voters that the secretary of state said contained misleading information.

The settlement comes five days after the suit was filed and a judge issued a temporary restraining order barring the Post Service from sending more of the mailers out, which said that voters should request a mail ballot 15 days before the election. While the fliers were sent to every household and P.O. Box in the country, the information is all the same and some states like Colorado have varying election models.

Registered Colorado voters are automatically mailed ballots for every election and can return them by mail, though around 75% of voters drop them off at drop boxes around the state. Ballots for the November election will start being mailed Oct. 9.

As terms of the settlement, the Postal Service will “take all reasonable measures” not to deliver any of the pre-election mailers that have not yet been delivered and to destroy them, then send notice within 30 days that they have been destroyed.

Griswold and her office will also have input on any changes to the Postal Service’s voting information website that might mislead Colorado voters and can object to changes, which will force the USPS to withhold them for at least 24 hours.

A designee from the USPS will also have to check with Griswold and Colorado Attorney General Phil Weiser before releasing new components of its media campaign to be sure any new media does not “cause voter confusion in Colorado.” The state can also object to said media being released, which will further delay it, according to the agreement.

The Postal Service will maintain editorial control over its online and other media content.

The settlement led to Colorado dropping its case. But it does not prohibit Colorado from taking the Postal Service to court again should it find the USPS is spreading information not useful to Colorado voters. Both parties will pay their own costs and fees.

“I am pleased with the settlement we reached today with the U.S. Postal Service. Voters deserve accurate election information. The terms of the settlement mandate that all reasonable effort be taken to remove all undelivered misleading mailers from the mail stream, and it requires collaboration between the Colorado Department of State and the USPS to make sure all future Postal Service communication includes correct information,” Griswold said in a statement. “I look forward to working with the U.S. Postal Service to ensure every Colorado voter is equipped with the information they need to successfully participate in the November 3 election. I appreciate the partnership of Attorney General Weiser to achieve this positive outcome,”

Weiser in a statement said he appreciated USPS for working with states to ensure the voter information was accurate for Coloradans. The Postal Service said it was pleased by the settlement.

“We are pleased that through open dialogue and communication with the state of Colorado we have resolved this matter, and look forward to working with the state and others across the country as we prepare for the election,” USPS spokesperson James Boxrud said in a statement Friday afternoon.

It was the state’s second court win against the Postal Service in two days. On Thursday, a judge in Washington issued a nationwide preliminary injunction stopping changes at the Postal Service that have slowed mail, calling the effort by the USPS and Postmaster General Louis DeJoy politically motivated and “voter disenfranchisement.” Colorado was one of 14 states that sued over the changes.

“I will continue to fight for Colorado to prevent the Postal Service, or any agency, from hindering Coloradans’ right to vote and am pleased we reached an agreement that results in the misleading notices being destroyed and giving Colorado the unprecedented ability to review and improve future media campaigns by the Postal Service related to elections,” Weiser said in a statement Friday. “I want to thank Secretary Griswold and her team as well as the dedicated professionals in our office who worked hard on this matter over the past week.”