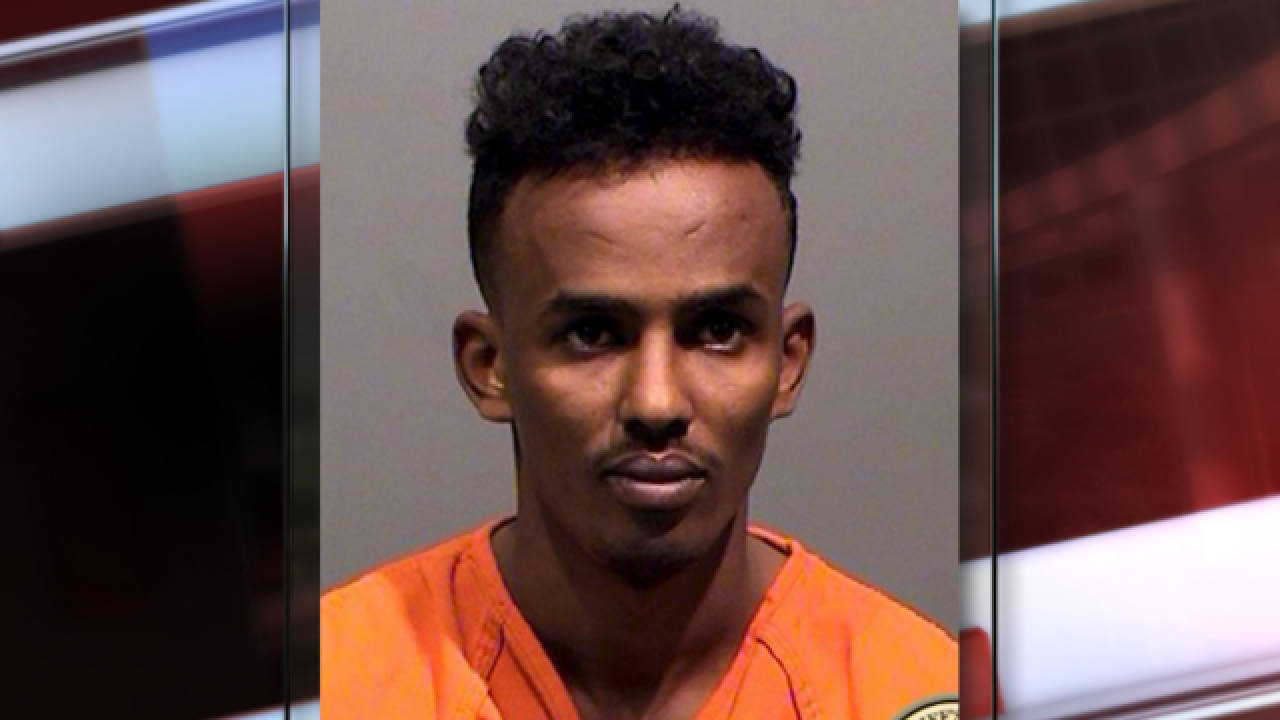 Copyright 2018 Scripps Media, Inc. All rights reserved. This material may not be published, broadcast, rewritten, or redistributed.
<p>Ahmed Muse, 29, was arrested on suspicion of second-degree kidnapping, false imprisonment and harassment charges and was booked into the Jefferson County jail.</p>

GOLDEN, Colo. – A Denver-area Uber driver was arrested Sunday after he allegedly kidnapped and kissed a 15-year-old girl who was trying to get home from work on Saturday, the Jefferson County Sheriff’s Office said Monday.

Ahmed Muse, 29, was arrested on suspicion of second-degree kidnapping, false imprisonment and harassment charges and was booked into the Jefferson County jail.

According to the sheriff’s office, Muse picked up the 15-year-old girl at her workplace in the 100 block of N. Rubery Drive in Golden around 10 p.m. Saturday. The girl had asked a coworker to schedule the ride through UberPOOL because she is a juvenile, the sheriff’s office said.

The girl had to sit in the front seat of the car because another pooler was already in the backseat, the sheriff’s office said. Her home was the closest along the pool route, but Muse went passed her house and claimed his app wasn’t working correctly, according to the sheriff's office.

Muse started driving toward the other passenger’s destination near I-76 and Pecos though the girl pleaded with him to stop – even offering an extra $10 so he would drop her off near her home.

But Muse refused to do so, dropping the other passenger off before returning to the girl’s original destination, the sheriff’s office said.

But he allegedly kept the doors locked once they arrived and kissed the girl against her will before he let her leave, according to deputies.

The sheriff’s office said it identified Muse through the app before arresting him on Sunday. Spokesperson Jenny Fulton said the other passenger in the car corroborated what the girl had told them before he was dropped off and said investigators were working to notify Uber while the investigation continues.

Uber offers a “Critical Safety Response Line” on its app for riders who fear for their safety . The sheriff’s office recommends people call 911 if they feel they are in danger or use the feature that allows people to share their trip status with others.

Uber said it removed the driver from the app in response to the arrest.

“What’s been described is deeply troubling and upon learning of it we immediately removed the driver's access to the app," an Uber spokesperson said in a statement to Denver7 Monday afternoon. "We stand ready to assist the law enforcement investigation in any way possible.”

In June, a Denver Uber driver was arrested and charged with first-degree murder in the shooting death of one of his passengers. The criminal case is ongoing in the courts after the suspect pleaded not guilty in the case last week.