‘Try and f—k with me’: Aurora dean threatened principal over not receiving recognition for exams 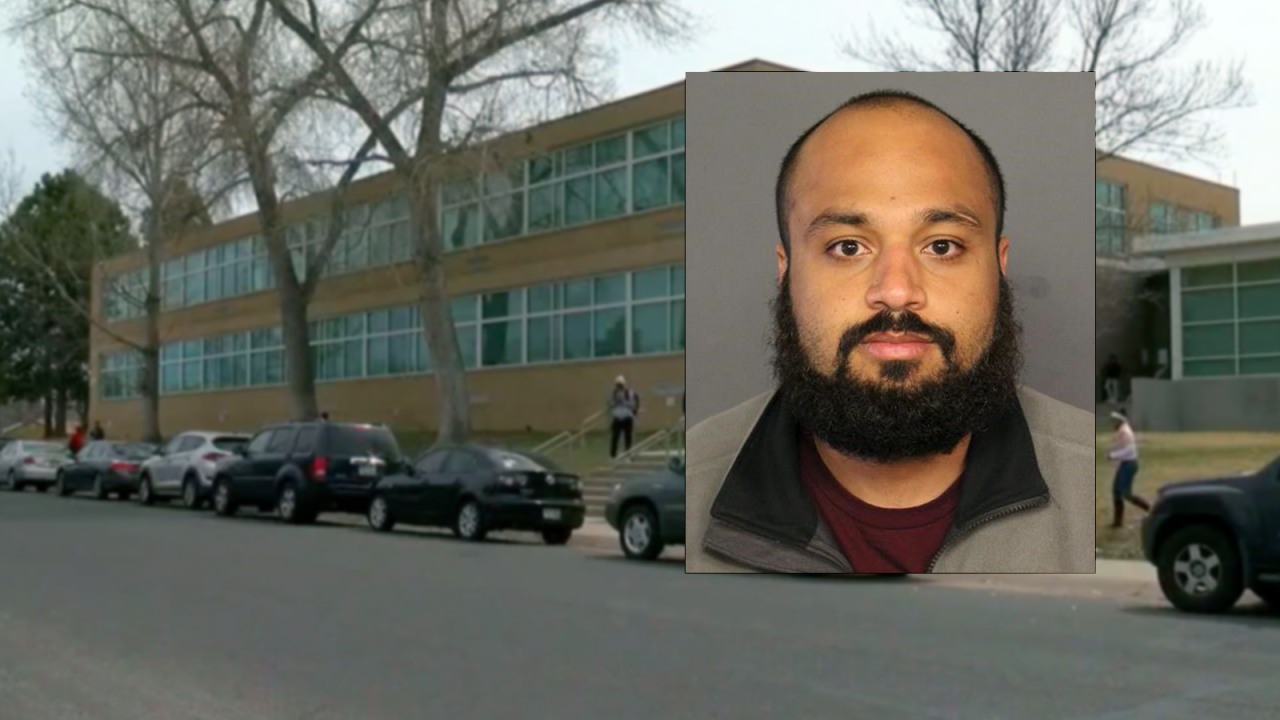 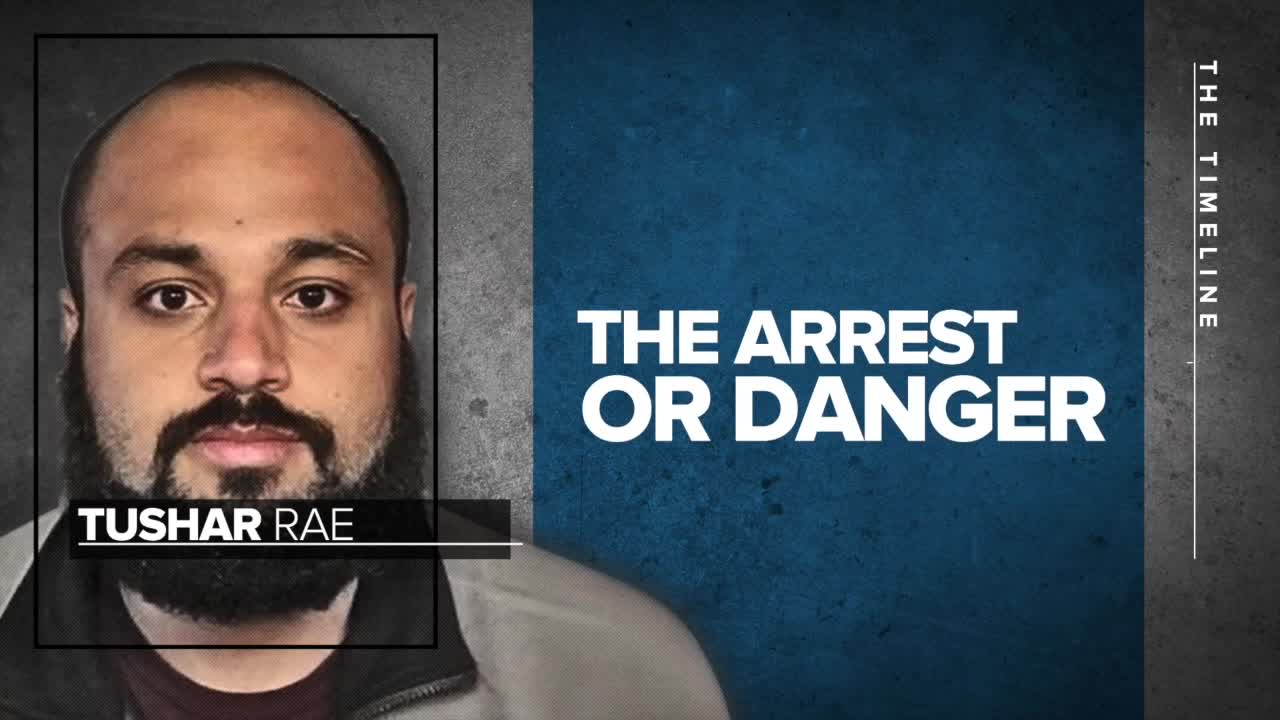 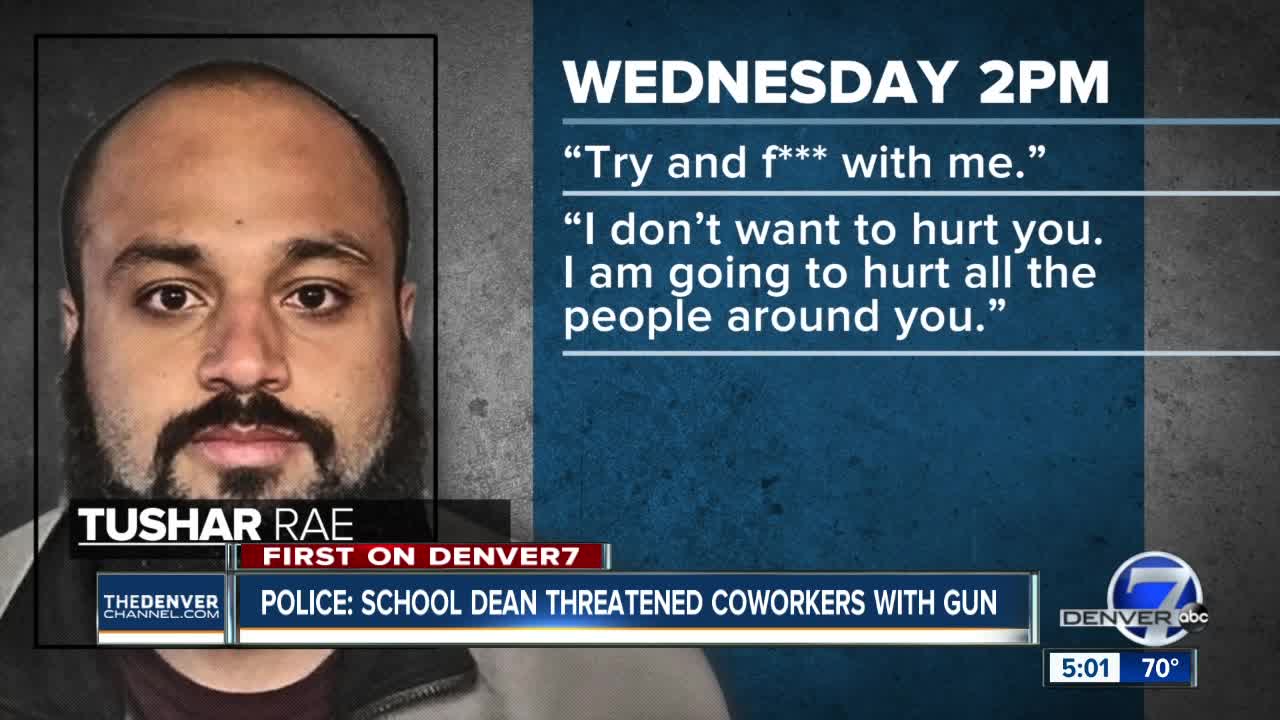 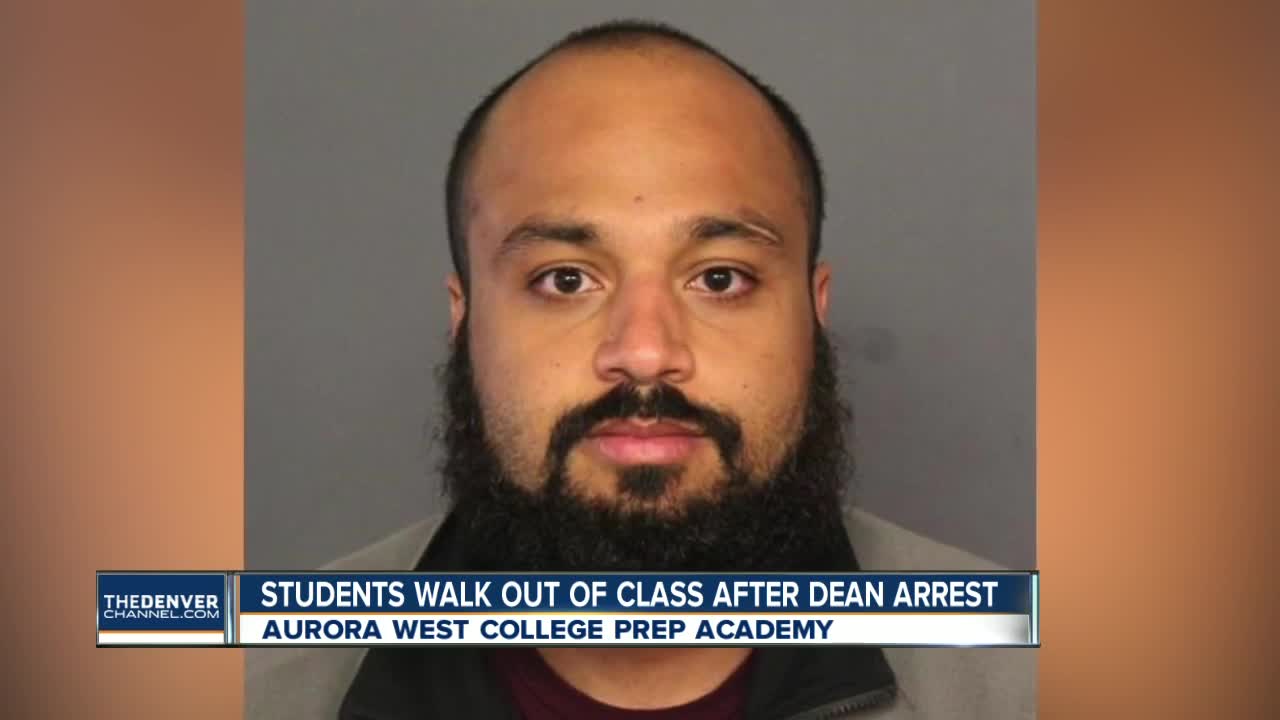 ARAPAHOE COUNTY, Colo. – An argument over not getting recognition for testing done at Aurora West College Preparatory Academy led one of the school’s deans of instruction to bring a gun to campus and threaten school officials earlier this week, an affidavit released Friday reveals.

Tushar Rae, 30, was arrested Wednesday and remains in Denver jail on suspicion of carrying a weapon on school grounds, a class 6 felony; as well as carrying a concealed weapon, a class 2 misdemeanor. His bond was set at $200,000.

The affidavit states Principal Taisiya “Taya” Tselolikhina had an argument with Rae on Tuesday over testing that the school was administering to students “and about not receiving acknowledgement and recognition he felt was owed.”

The following day, Tselolikhina received a text at around 2 p.m. from Rae, telling her to meet in his office after the dean of instruction didn’t show up to school the whole day, and didn't inform anyone he was going to be absent.

Once in the office, Rae reportedly pulled a black handgun from his waistband and placed the gun on the counter. Rae then said, “Try and f—k with me. You shouldn’t have said what you said. I don’t want to hurt you. I’m going to hurt all the people around you,” according to the affidavit.

He then said he was going to “shoot the kneecaps off of Jessica and Denise.” Jessica Rodriguez is an assistant principal at the school and Denise Huber is another dean of instruction.

The probable cause statement notes he then asked the principal what she was going to do about it.

"I came prepared,” Rae allegedly told Tselolikhina before he patted his pocket adding that “he had two extra rounds.” Rae then told the principal to walk away or he would “shoot the next person outside the door,” police documents state.

As he made the statement, there was a knock on the door. Rae then reportedly picked up the gun and placed it back into his waistband and answered the door.

On the other side were two students and the report states Rae had a brief talk with them. It does not state, however, what the dean of instruction told the students.

Tselolikhina then left Rae’s office and began to place the school on lockdown, according to the affidavit.

The incident “prompted a large scale police call for service and numerous officers responded to the school,” the probable cause statement states.

Investigators said one of the responding officers talked with the principal while another was on the phone with the suspect, who did not initially tell the officer where he was.

Rae then told the officer that some of the school staff had been harassing him, but the suspect did not provide further details to the officer during their conversation.

According to the affidavit, Rae also admitted to sending text messages earlier “that he should not have sent,” but it’s unclear what the content of those message was, as the suspect did not provide further details to police.

The probable cause statement states Rae “expressed concern” about the school being on lockdown and told the officer on the phone he wanted the lockdown lifted so the soccer team could play a game scheduled for later that day.

The suspect then told the officer he was at his house and police went to his address, where they found a Remington handgun and three magazines in Rae’s bedroom cabinet.

He was arrested and held on a bond on suspicion of felony menacing and misdemeanor interference with staff, faculty, or students of educational institutions, but posted bond and was released before he was able to be issued a restraining order.

His bonding out caused Aurora Police to send officers to Aurora West College Preparatory Academy as well as the homes of school staff to make sure they were safe.

Rae was then booked into Denver’s Downtown Detention Center on Thursday on a fugitive of justice hold from the Arapahoe County Sheriff’s Office.

Communications to parents following the lockdown on Wednesday told a different story about what took place inside the school as hundreds of kids were still in class.

A call from the principal made to parents on Wednesday stated that both Aurora Public School officials and the Aurora Police Department investigated a possible threat at the school and that “there were rumors of an armed individual in the area” – hours after the district, school administrators and the school principal were aware Rae was on campus allegedly armed with a gun and reportedly making threats.

"After that (the lockdown), we received another call saying that the school was fine; there was like, no threat to our school, that everything was OK," said Espinoza. "But now we come to find out it was a dean and he was inside the school. Why are they keeping this all secret? What's going on? We don't even know," she said, adding she and other parents came to the school Friday demanding answers.

"We told them we need a conference, we need something for you to explain what's going on. And why this happened," Espinoza said. "They need to give us an answer, they need to tell us the truth."

A second call from the school would eventually come on Thursday, stating that after school officials learned about the allegations, “we promptly placed the employee on administrative leave."

According to a follow-up statement from the school, Rae is not allowed on school grounds pending the outcome of the criminal investigation.

Students walk out after learning what happened

Dozens of students walked out of class at the school Friday morning, saying they were not told that Rae allegedly brought a gun to the school Wednesday and made the threats. Some of their parents joined them as well, both groups demanding to know more after they were kept in the dark.

Students & parents at #AuroraWest walked out in protest after they say they were left in the dark about a dean with a gun on campus reportedly threatening school staff. @DenverChannel broke the story & only after we started asking questions were parents sent a more detailed note pic.twitter.com/HCi03N3qNv

"The point of the protest is that, why did they lie to us? And like, why didn't the school like, tell us straight up," said Juan Narango, a freshman at the school.

"The safety of our children, that's the priority here."