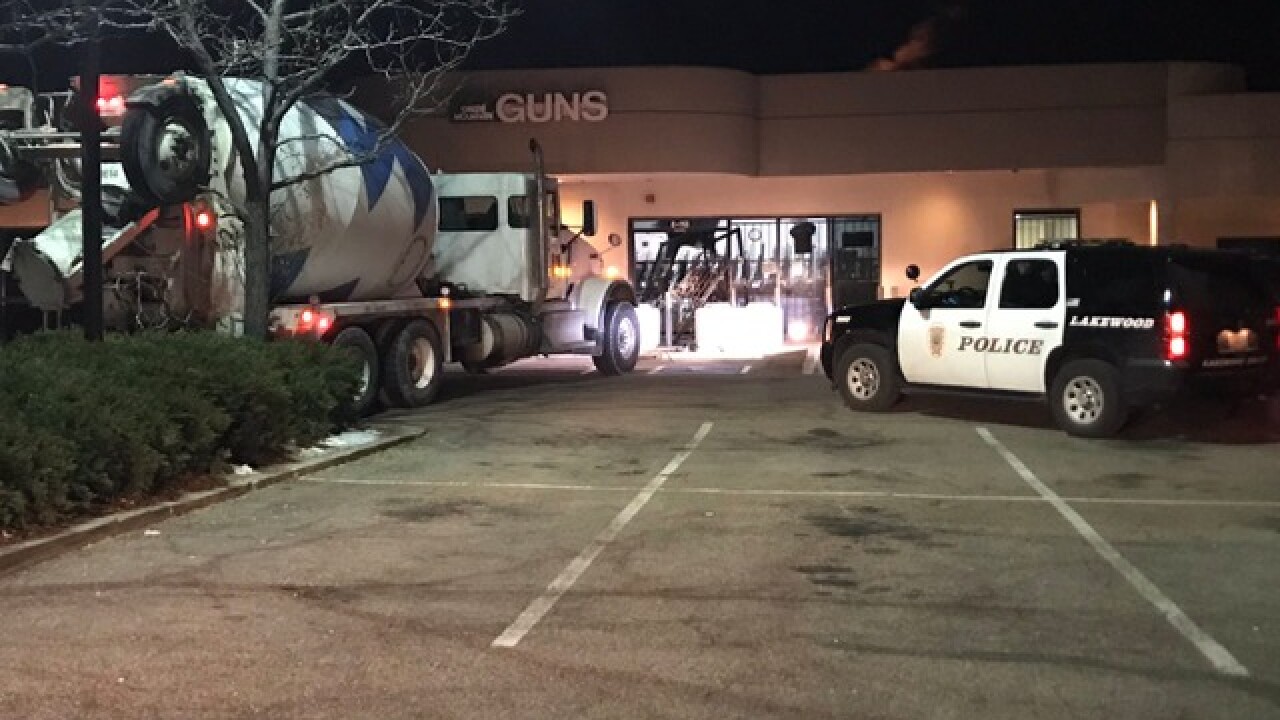 Police are looking for two suspects who used a cement truck to open the doors of a gun store early Tuesday morning.

Lakewood Police Det. Timmy Marquez said the department received a report of a verified alarm around 4:15 a.m. at Green Mountain Guns on South Yarrow Street, which is near S. Wadsworth Boulevard and W. Hampden Avenue.

“When we got here, we discovered a cement truck that had cable attached to it that pulled the doors off of this gun shop,” said Commander Mark Reeves.

The truck was stolen from a site in Arvada, though police could not say whether a key was used to take the truck or whether it was hot-wired.

“In the video footage, it appears that two males went in, smashed the case, grabbed some guns and immediately left," Reeves said. "They left the cement truck here on scene."

Police told Denver7 that the suspects are two men wearing gloves, masks and hoodies. They are still working to determine whether another car was used to leave the area or whether the suspects fled on foot.

Police have not yet said how many weapons were stolen, but said they believe the majority of them are semi-automatic.

“Now, we have a few guns on the street that we don’t want on the street and they obviously ended up in the hands of criminals, so this is very concerning,” Reeves said.

At the gun shop Tuesday afternoon, employees were cleaning up glass and debris as contractors worked to fix the doors.

“We are very fortunate — as you can see, we have substantial security measures,” said owner Mike Cook. “That played a major role in the amount of loss that we might have had.”

Cook has owned the store along with his wife for about a year and said he’s already added numerous security precautions.

“We have multiple security cameras,” he said. “We actually just upgraded our system about two months ago.”

There are also alarms and at least three layers of added security in the front of the store.

“This particular gun store did everything right as far as fortifying the front of their store and they were still burglarized,” Reeves said.

This is the third time in two years that Green Mountain Guns has been targeted, but it's the only successful break-in.

“It did take a cement truck and even with that, a lot of our hardening held so that slowed them down,” Cook said.

He brought in extra staff Tuesday to take complete inventory of the store and try to pinpoint everything that went missing. The ATF is also involved. Cook said he’s familiar with how the investigation process will go since he is a retired federal agent himself.

Now, he’s looking for new ways to fortify the store to prevent another break-in.

“We have some ideas that we’re talking about right now,” he said.

Anyone with information on the burglary or who might have seen a cement truck driving around the area early Tuesday morning is asked to call Lakewood police.