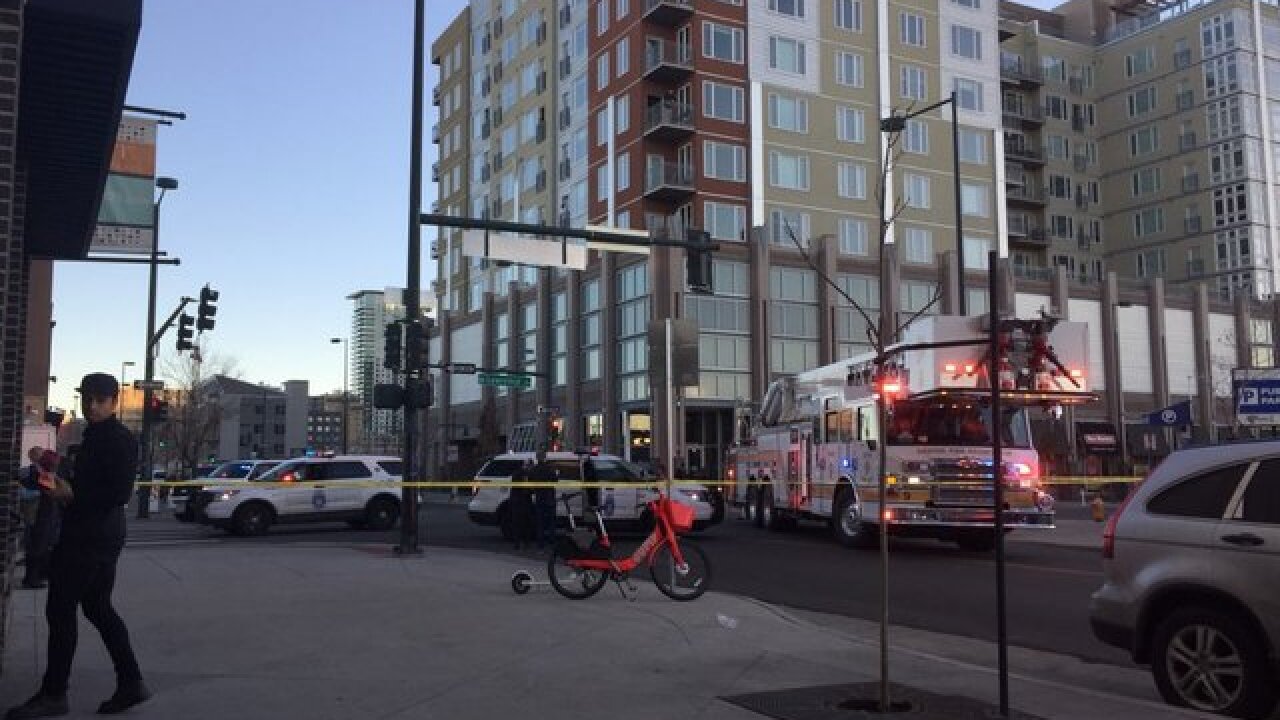 Copyright 2018 Scripps Media, Inc. All rights reserved. This material may not be published, broadcast, rewritten, or redistributed.
<p>The scene of the shooting at 21st Ave. and Lawrence St. in downtown Denver in which one man was killed and four others were injured.</p>

DENVER – Federal prosecutors said Wednesday that the downtown Denver shooting that left one man dead and four others wounded was a shootout between members of two different sets of the Crips gang.

The U.S. Attorney’s Office charged Dashae Eugene Armstrong, 23, Wednesday with one count of being a felon in possession of ammunition. Denver police announced Tuesday they had arrested Armstrong along with another man, 24-year-old Josh Hayward, in connection with Monday’s shooting at 21st Ave. and Lawrence Street near Coors Field in Denver.

Hayward is being investigated for a first-degree murder charge and was scheduled to make his first court appearance Wednesday. The affidavit for Hayward’s arrest is sealed, according to court records, and the Denver District Attorney’s Office said it had not received his case from police yet, meaning Hayward has not been formally charged.

The U.S. Attorney’s Office for Colorado said investigators found spent 9mm casings at the scene of the shooting that matched the gun Armstrong allegedly used in the shooting.

Armstrong was also shot in the leg in the exchange of gunfire and was discovered by firefighters not far from the original scene. He was one of the four people transported to an area hospital with non-life-threatening injuries after the shooting, police said Tuesday.

The U.S. Attorney’s Office says that Armstrong is a Tre Deuce Crips gang member and alleges that Hayward is a member of the Tre Tre Crips – a different set.

A federal law enforcement source told Denver7 Wednesday the person who died in the shooting was not involved in a gang.

Armstrong has prior felony convictions in Denver for distribution of a controlled substance. He was remanded to federal custody after Wednesday’s court hearing and has a detention scheduled for Nov. 27.

“Today my office filed charges as part of the law enforcement and prosecutorial response to this violent crime,” U.S. Attorney Jason R. Dunn said in a statement. “We work together with our state and local partners and will step in when state prosecution is not feasible or possible.”

Dunn’s office said that Armstrong could face up to 10 years in prison and a fine of up to $250,000 if he is convicted.