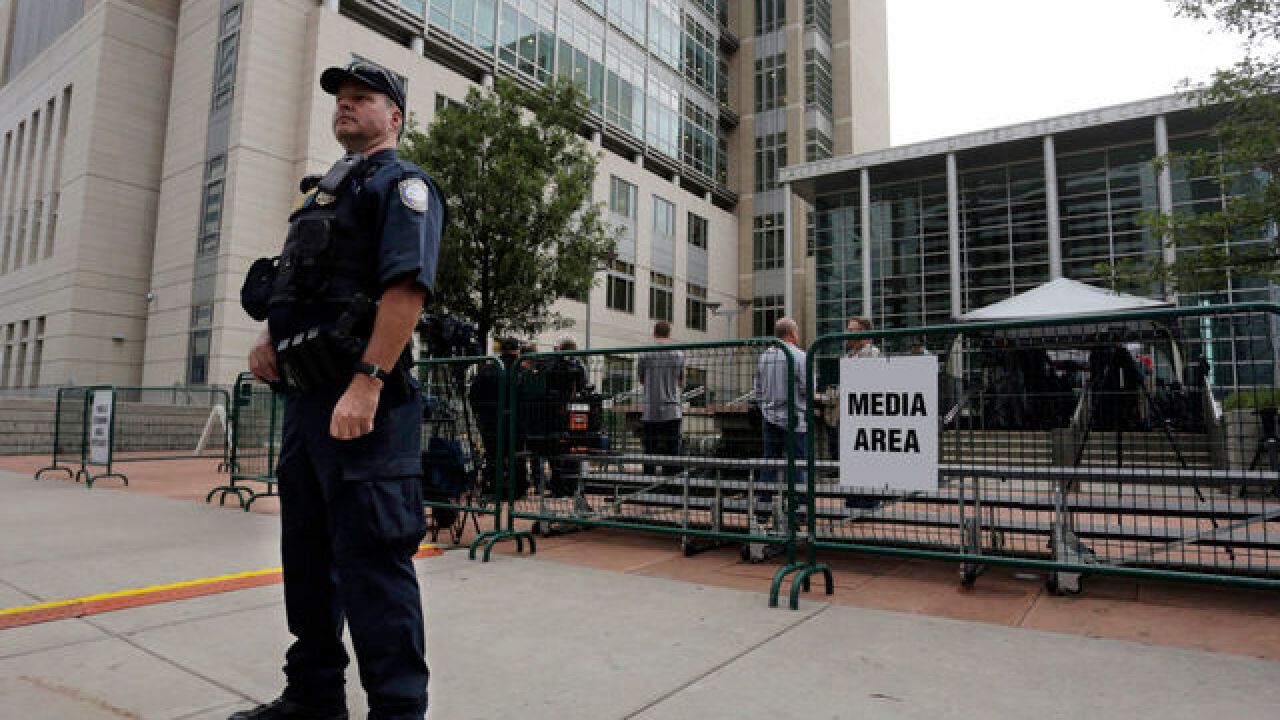 2017 Getty Images
Joe Mahoney
<p>DENVER, CO - AUGUST 08: A federal police officer stands guard during the civil case for Taylor Swift vs David Mueller at the Alfred A. Arraj Courthouse on August 8, 2017 in Denver, Colorado. Swift is suing David Mueller, a former DJ, for assault and battery after he allegedly groped her when they had a photo taken together June 2, 2013 at the Pepsi Center in Denver. Mueller is also suing Swift for supposedly pressuring his former employer, radio station KYGO, to fire him following the incident. (Photo by Joe Mahoney/Getty Images)</p>

DENVER (AP) — U.S. prosecutors told a jury Thursday that a Philadelphia man frustrated by mistreatment of Muslims used codes and other deception to hide a $300 payment in support of a terrorist group , but defense attorneys said the native of Uzbekistan was only paying down a debt to an acquaintance.

Opening statements marked the start of a Denver trial that is expected to include testimony from international witnesses using aliases and disguises, transcripts of phone and email conversations in at least three languages and a team of translators dedicated to helping the defendant understand the proceedings.

Federal authorities arrested Bakhtiyor Jumaev more than six years ago at his apartment in Philadelphia. The case is being tried in Colorado because the man who received the money lived in suburban Denver at the time.

Prosecutors said Jumaev became close with another Uzbek native, co-defendant Jamshid Muhtorov , when they briefly shared an apartment. The men discussed a group called the Islamic Jihad Union in phone calls and emails, using code words including "wedding" to refer to jihad or fighting, prosecutor Gregory Holloway said in his opening statement.

After his arrest, Jumaev confessed to knowing that it was a crime to send money to terrorist groups and to using code words, Holloway added.

"They decided to finally act on their resentment and their anger," Holloway said. "And you will see from the evidence, they took steps to get money to this terrorist group."

Jumaev's attorney, David Barry Savitz, told jurors that his client is an immigrant who left his wife and three sons in 2000 in Uzbekistan, frightened by mistreatment of Muslims under an authoritarian leader. He said Jumaev worked a variety of jobs, sending most of his paychecks back to the family.

But after Jumaev was arrested by immigration authorities in 2010, he was in a financial hole and needed help to afford bond, he said.

Muhtorov, the roommate, chipped in $500, and Jumaev was determined to pay him back, the attorney said. Authorities who had been investigating Muhtorov for months misunderstood a recorded phone conversation referring to the debt payment as a "wedding gift," Savitz said.

Defense attorneys also argued that Jumaev's confession was coerced, saying he was arrested following an overnight shift cleaning grocery stores and interrogated for several hours until he felt "like a broken man."

"He considered himself trapped," Savitz said. "He was scared. He was exhausted."

Muhtorov, who is being tried separately, was arrested in January 2012 at a Chicago airport. Prosecutors said he was preparing to board a flight overseas, with $2,800 in cash.

Authorities have said they also found propaganda videos from terrorist groups on his phone. Muhtorov's attorneys have said he denies the allegations .