A new high-tech forensics crime lab has opened to address both major and minor crimes in a jurisdiction southeast of Denver.

The Unified Metropolitan Forensic Crime Lab, located just south of the Centennial Airport, is a shiny blue and gray building on a mostly flat terrain. It was a long-time venture and dream for several leaders in local law enforcement and as they stood in a meeting room Wednesday afternoon, they explained how, and why the crime lab came to be.

Need for a new crime lab

The birth of the idea stemmed from a coffee shop conversation between Douglas County Sheriff Tony Spurlock and Arapahoe County Sheriff David Walcher. As helpful and beneficial as the Colorado Bureau of Investigation is as a partner, it must serve the entire state, which means some cases can take an extended amount of time, Spurlock said.

“We had the idea of wouldn’t it be great if we could enter into some kind of a partnership and potentially build what would be a crime lab serving Arapaho and Douglas Counties,” Walcher said.

The men approached Aurora Police Department Police Chief Nick Metz and District Attorney for the 18th Judicial District George Brauchler to build the idea further. All four were in on the idea: A lab that would serve the entire judicial district of potentially four counties — Arapahoe, Douglas, Elbert and Lincoln — with a population of about 1 million people.

“I personally, am incredibly proud of this and in 37 years in law enforcement, this is one of those times that I think will live on for a long period of time and will serve this entire judicial district in serving crimes faster, clearing people faster, putting bad people in jail faster and being able to solve more crimes,” Walcher said.

Purpose of this lab

While arrests are bound to occur as a result of the lab's findings, the focus goes beyond convictions and incarcerations, Brauchler said.

“It is about justice,” he said. “Justice must be predicated upon the truth and the timely delivery of that truth. This facility exists for us to achieve justice in this community, that’s how I view it… This is a big forensic deal.”

As soon as the lab is up and running and taking in evidence, it will start to alleviate the pressure put on CBI, he said. Instead of submitting DNA results from something like a car theft and having it ranked behind cases of rape or murder at CBI, the lab will have the resources to address these more minor crimes.

“What we’re really looking forward to here is being able to submit samples for DNA that are not just going to be for the robberies and the rapes and murders, but also those lower-level crimes that … if not taken care of and if the person responsible not taken off the streets, can end up committing more serious crimes in the future,” he said.

Several specialties of crime forensics are housed in the building, ranging from fingerprint analysis to DNA testing to documents examination. Here are some of the various departments around this new lab:

With cubicles striped in turquoise, gray and black, the office houses various conference rooms of different sizes and desks for employers to continue their work outside the laboratories. Chief Deputy Steve Johnson with Douglas County Sheriff’s Office said this is where staff would come to download information or data, fill out reports and process findings. This is also where staff can analyze fingerprint prints gathered from other parts of the lab. 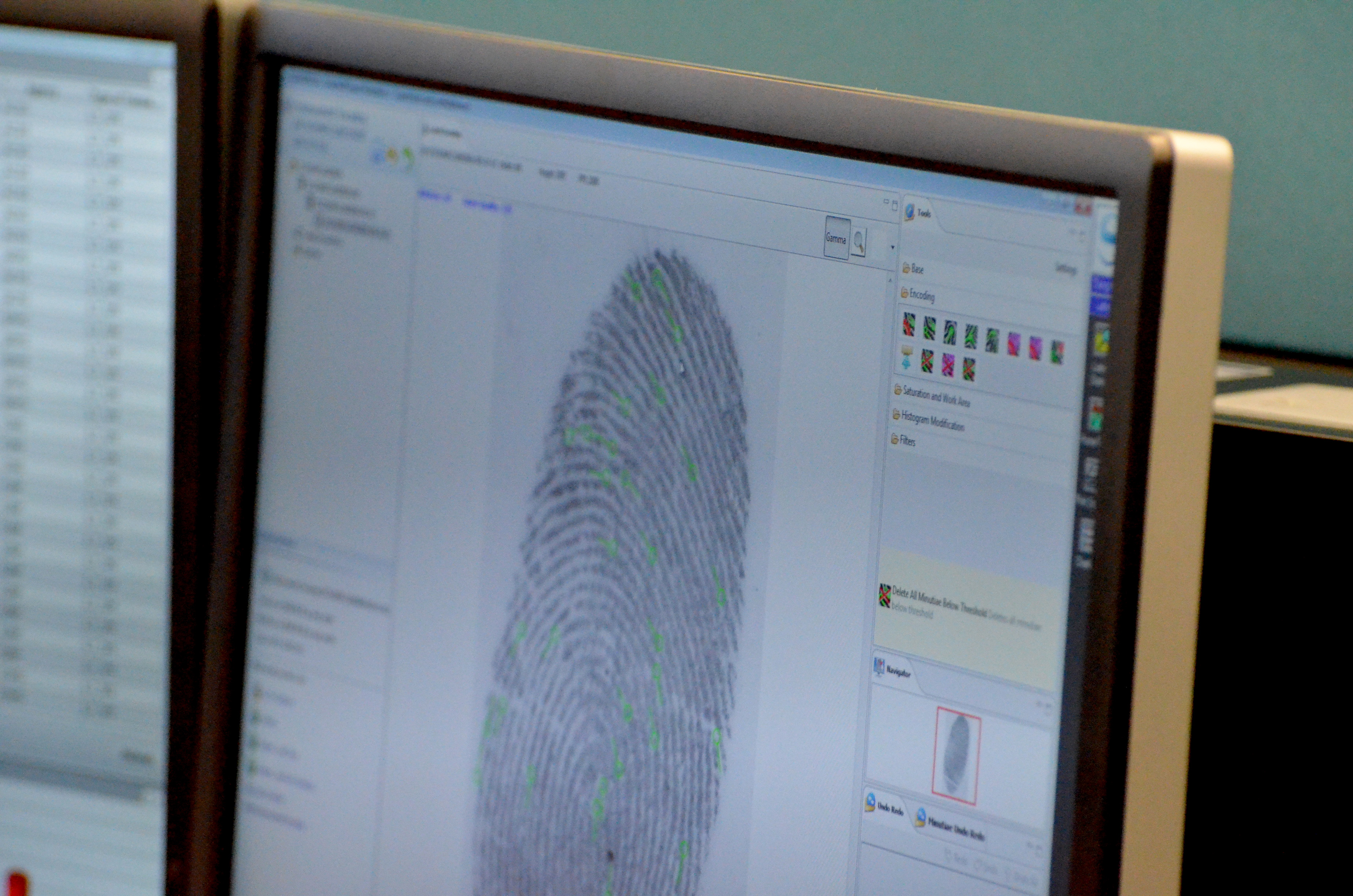 There are multiple instruments in the facility’s chemistry lab that can be used to identify a range of different substances. Derek Delve with the lab said staff can do microscopy-type testing, color testing and documentation of evidence, among other tests. Should the lab receive an unknown substance to analyze, they can extract it from the material it’s on and through a range of different examinations, can determine what sort of function groups or molecular bonds are involved. 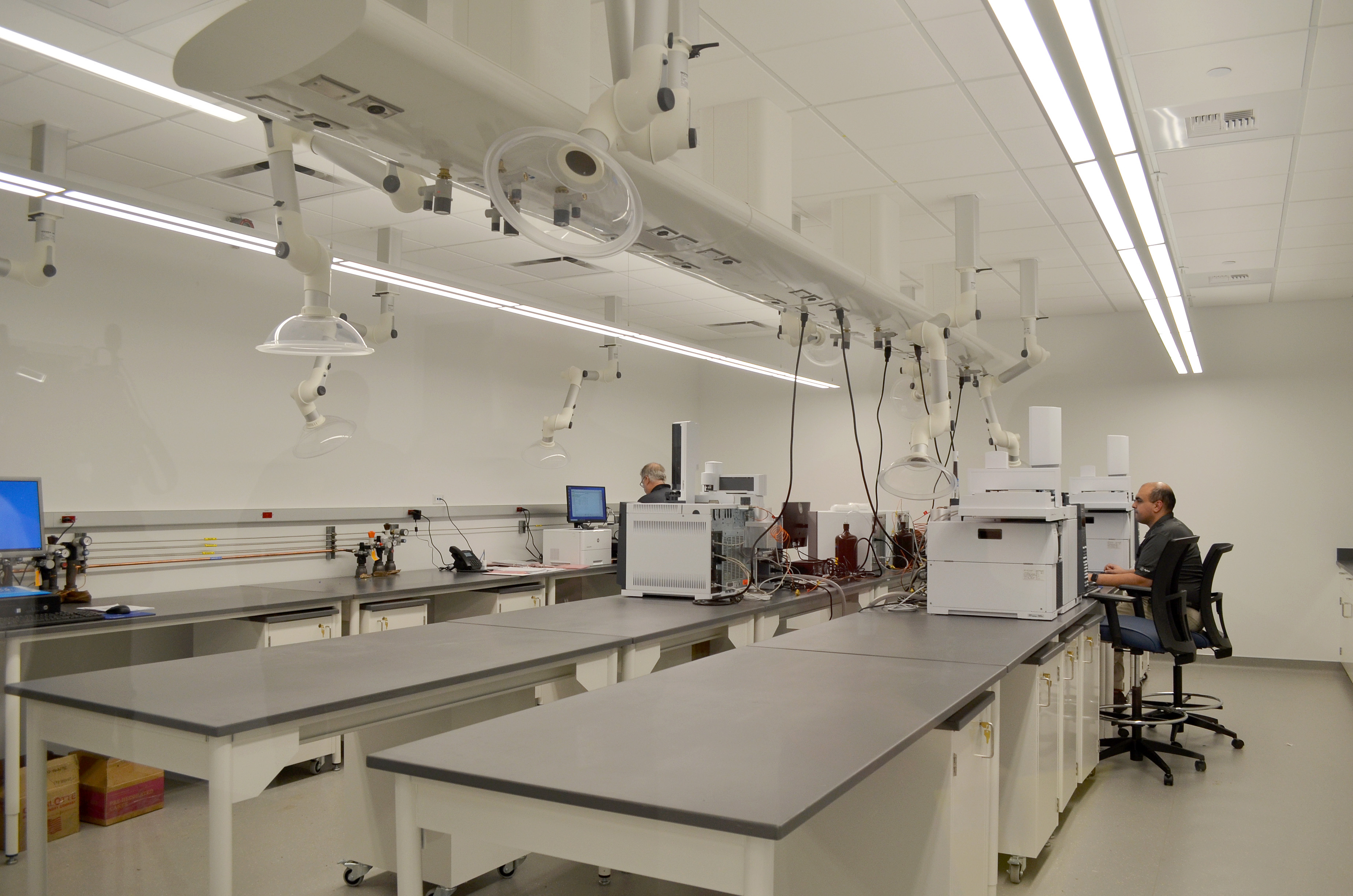 “After all of these examinations are completed, we test fire the firearm into a water tank,” she said.

The bullet recovery tank is an illuminated, long, silver tub, with a firing port that locks to keep a firearm in place. In this room, Elvarez Bacha and her coworkers can, manually or remotely, fire a device into the tank. 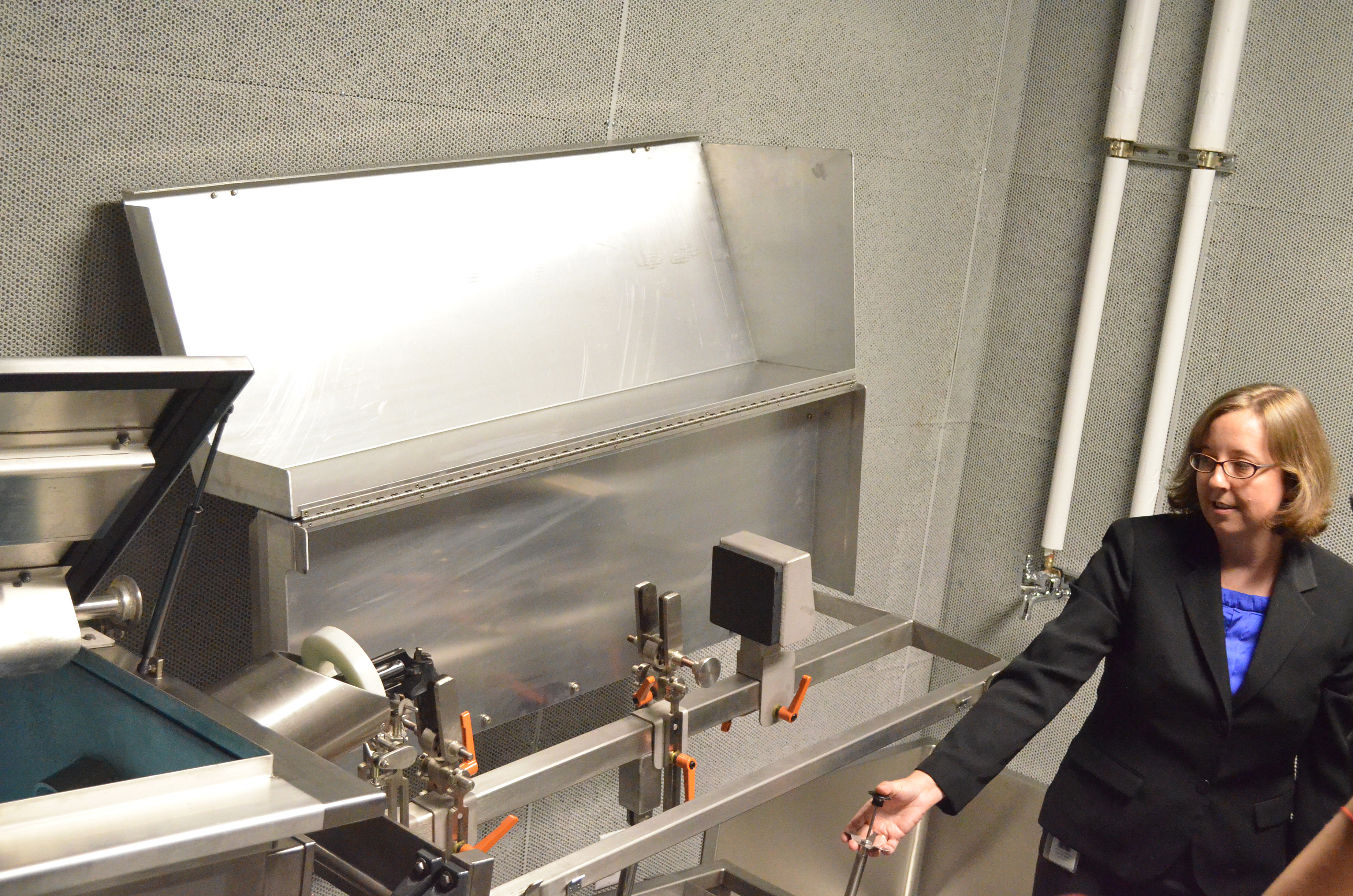 The lab also includes a firearms reference room, which was stocked with various sorts of hand guns and long guns for comparison to firearms submitted as evidence. It will also serve as a way to replace missing or broken pieces on the crime-related firearms. 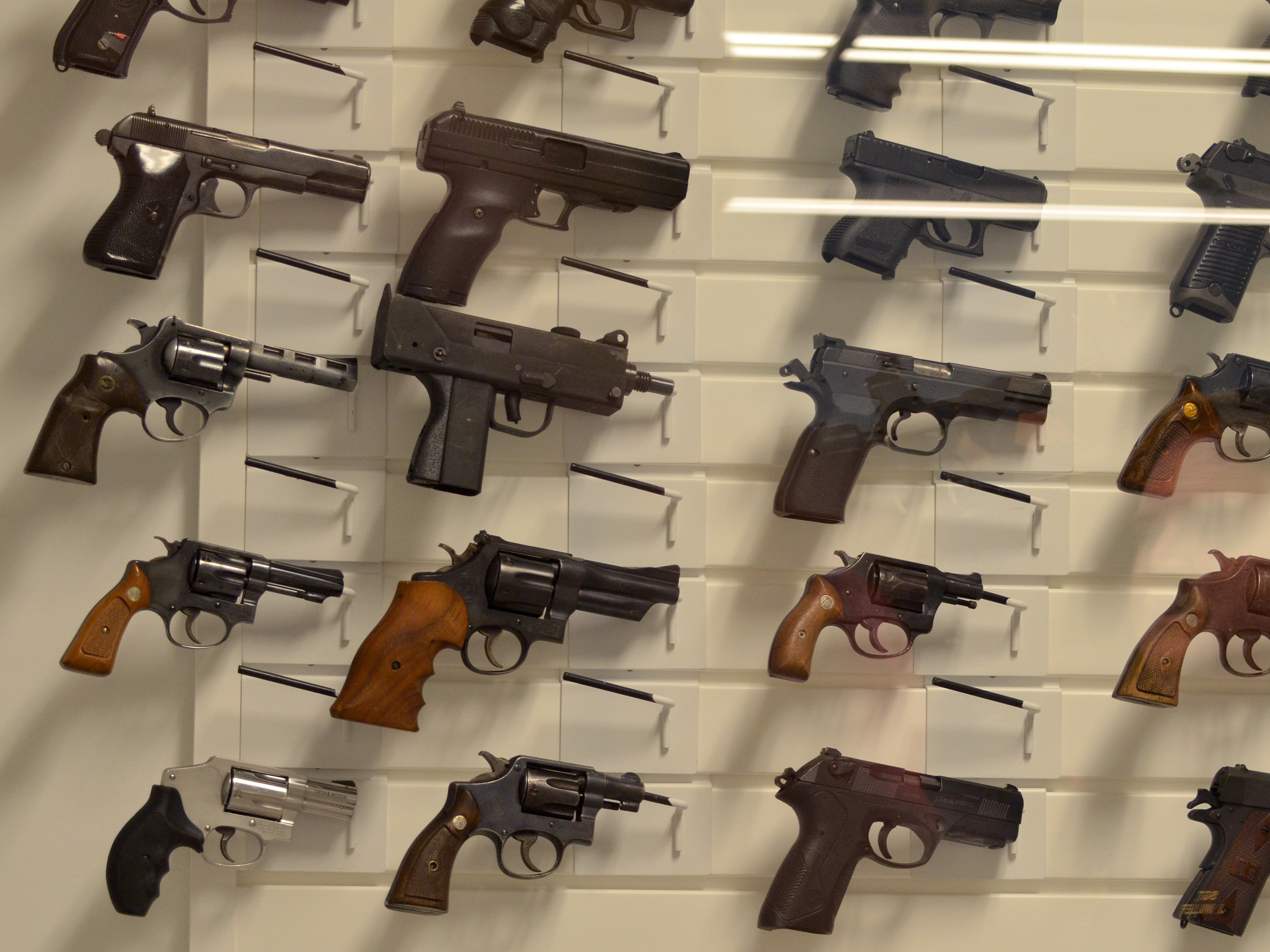 While the main part of the lab was mostly empty, Elvarez Bacha pointed out two comparison microscopes, each with a bullet under the lens, and said the machines could help lab workers determine if two different bullets could have been shot from the same firearm.

Under multiple angles of video surveillance, tall shelves were bare Wednesday afternoon in the lab’s evidence area. Johnson said the room was created specifically to hold evidence, and even has an independent air system completely separate from the building. Extra security was installed in the walls and roof of the room. Having the room’s activity monitored 24/7 is not only an extra security measure, he said, but it also meets high accreditation standards.

The items kept in the evidence area won't stay there long. Johnson said the lab is strictly for short-term evidence. 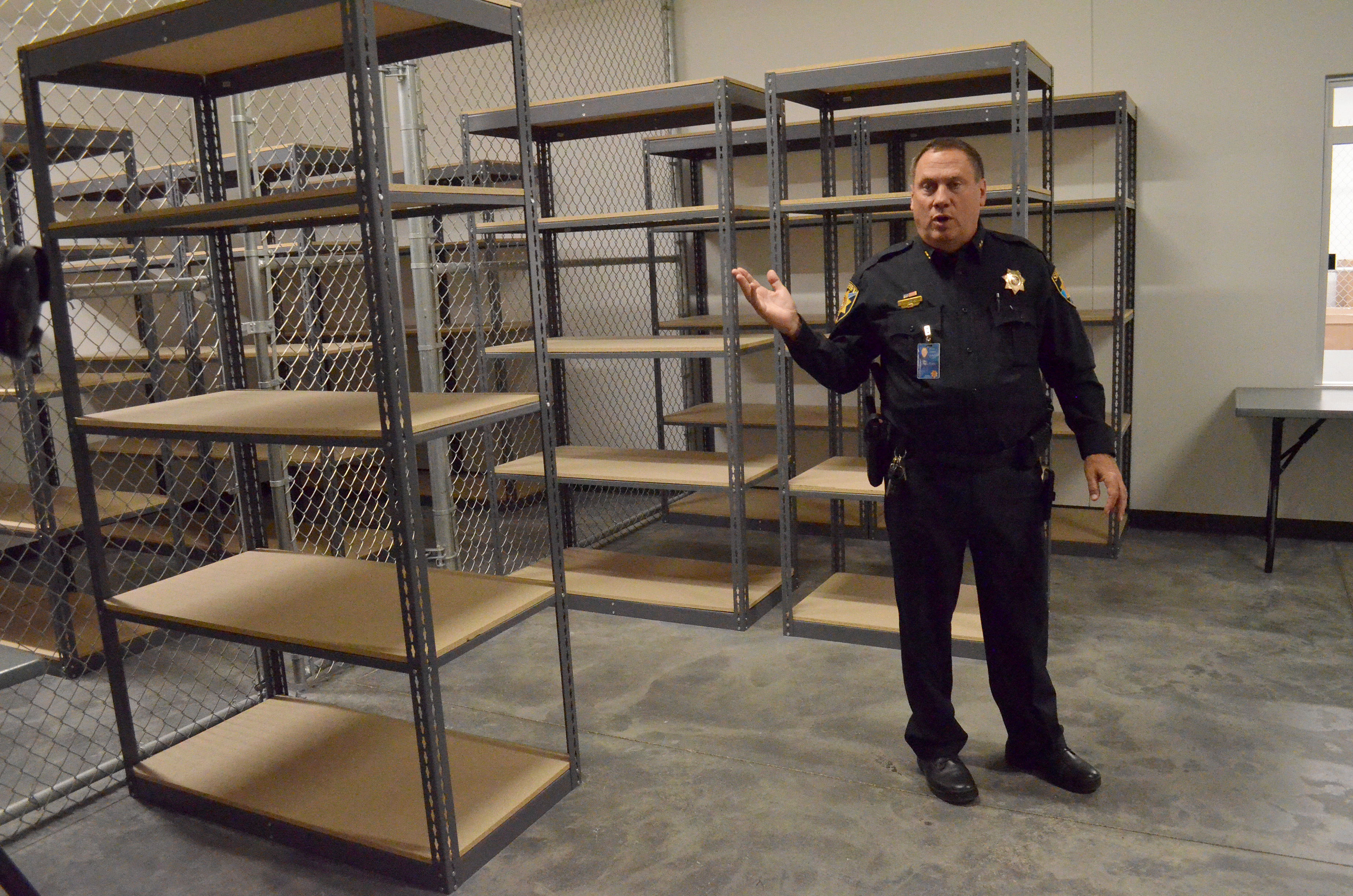 “Many times, people think we just do handwriting analysis and that’s far from what we do,” she said. “Part of our education is to try to let other organizations know what all it is we can do.”

She said in the lab, she and her co-workers will examine at handwritings, typewritings, printing processes, papers, inks, mechanical devices, erasers and other types of evidence. 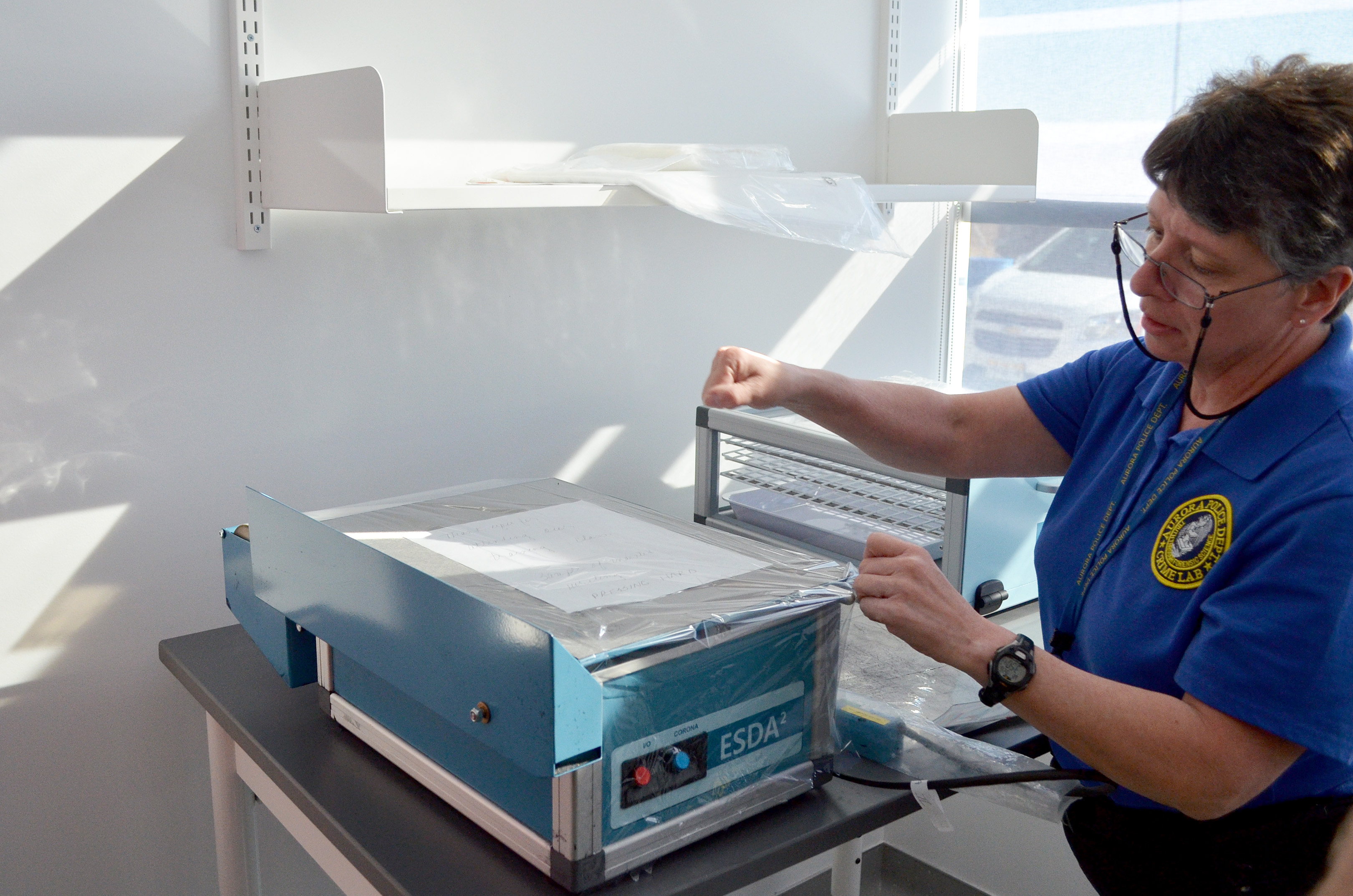 For example, she said, she can examine the writing on a check to see if somebody changed a "3" to an "8."  They can also match tears in materials, like if somebody rips a piece of duct tape from a roll to use in a crime.

They can also grab DNA swabs from the materials, and determine if currency is genuine or fake, McCarley-Celentano said.

Despite misconceptions, she said that her team will not attempt to identify personality traits based on handwriting.

The new forensics lab was created not just with crime in mind, but the employees that walk its halls. Johnson said it has a lactation room for new moms who work in the building. Employees also have access to a co-ed locker room, complete with two changing rooms. This reduces the building’s environmental footprint by eliminating the need for two gender-specific locker rooms, Johnson said.

The crime lab was built for the needs of the local judicial system in this current age, Brauchler said. While it may have a modern and advanced feel, it was designed to serve needs beyond current forensic science.

“A portion of this building has the ability for a move-out, an expansion, out into an open field that is the property of this facility,” he said. “So, we can grow.”

That available space is just another way the crime lab has a focus on serving the communities for years to come.

“We have the ability to expand into the unknown,” Brauchler said.