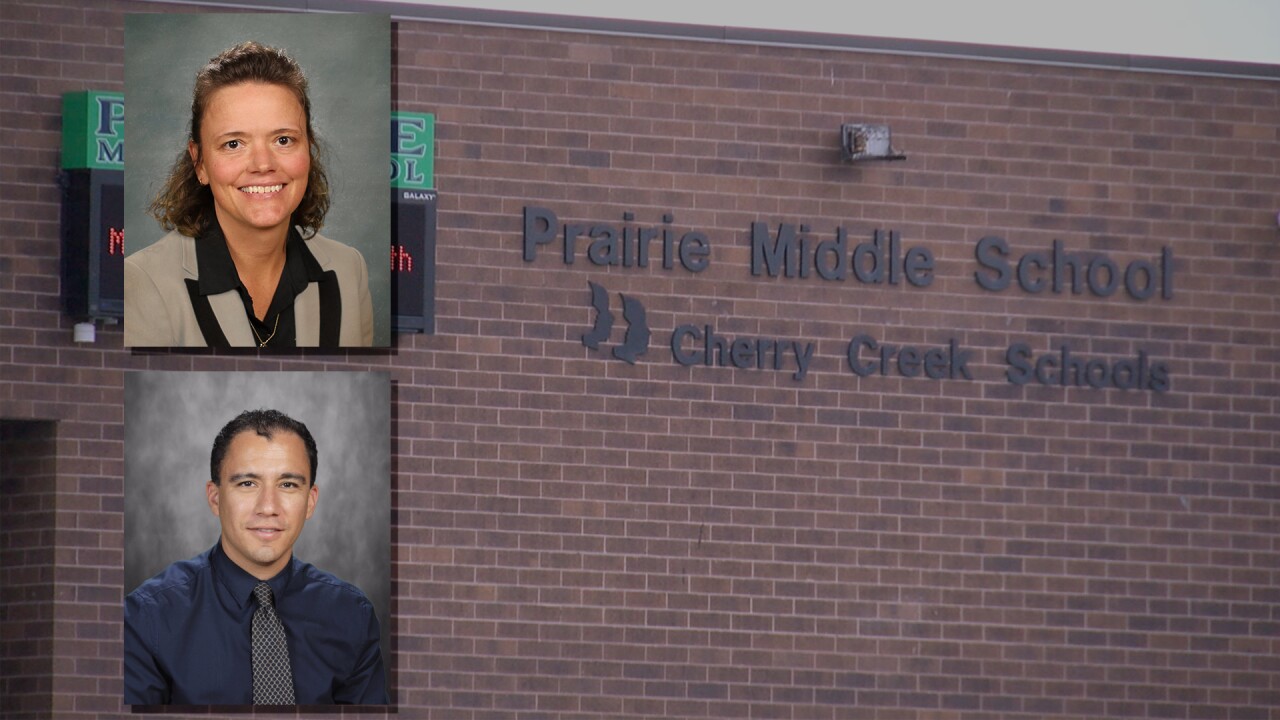 Copyright 2019 Scripps Media, Inc. All rights reserved. This material may not be published, broadcast, rewritten, or redistributed.
Cherry Creek School District
Last summer, an Arapahoe County Court judge twice denied motions from attorneys for David Gonzales, the former principal, and Adrienne “AJ” MacIntosh, the former assistant principal, for the charges to be dismissed. Their attorneys had argued the grand jury did not have probable cause to indict them and that the statute of limitations had run out, though MacIntosh entered a not guilty plea.

CENTENNIAL, Colo. – An Arapahoe District Court judge ruled this week that charges of failure to report suspected child abuse levied against the former principal and assistant principal of Prairie Middle School in the Cherry Creek School District should be dismissed because the statute of limitations on the alleged crimes had run their course before they were indicted by a grand jury last year.

Last summer , an Arapahoe County Court judge twice denied motions from attorneys for David Gonzales, the former principal, and Adrienne “AJ” MacIntosh, the former assistant principal, for the charges to be dismissed. Their attorneys had argued the grand jury did not have probable cause to indict them and that the statute of limitations had run out, though MacIntosh entered a not guilty plea.

The two were each indicted by a grand jury in January 2018, along with a former counselor at the school, on a misdemeanor charge of failing to report suspected child abuse involving former social studies teacher Brian Vasquez, who was arrested in August 2017 and accused of sexually abusing a 14-year-old student and exchanging nude photos with several others.

The charge against the third person indicted, the former school counselor, was dismissed last year, though the case was sealed so it had been unclear why prosecutors dropped the charge.

He was sentenced in September to 40 years-to-life in prison.

The Cherry Creek School District settled with the families of the victims in the case for $11.5 million later that month, with the district superintendent saying at the time in a letter to district parents: “We acknowledge that no amount of money can right the wrongs committed against these students by Mr. Vasquez. No student should ever suffer the injury and loss of innocence that these young women suffered as a result of the reprehensible actions of Mr. Vasquez.”

The crimes happened in 2013, and it was alleged by prosecutors that though the victim in the case reported Vasquez’s assaults, school administrators failed to report the abuse to law enforcement or social services. Rather, the victim was allegedly suspended from school and forced to apologize to Vasquez, according to the indictment.

The two were placed on paid leave by the school and district while the case was pending and remained on leave Wednesday, according to Cherry Creek School District spokesperson Abbe Smith, who said that Gonzales has been paid his $111,913 salary and MacIntosh had received her $79,575 salary.

Smith said the district was having discussions internally about how to move forward regarding the two administrators.

This week, the Arapahoe County District Court judge agreed with defense attorneys that the 18-month statute of limitations had run its course and ruled that the charges against both should be dismissed – despite the county court judge’s ruling that failure to report child abuse was a “continuing offense” and that the statute of limitations doesn’t start until the crime is discovered or the abuse is reported.

The judge’s ruling incensed 18th Judicial District Attorney George Brauchler, who on Wednesday called for an appeal by the Colorado Attorney General’s Office and changes in the legislature to the law, which Brauchler called “extremely weak.”

“This ruling and the inadequacy of the mandatory reporter law means that a teacher, a therapist, a member of the clergy, or many others who know about the abuse of our children – and is required by law to report such abuse to the authorities – could escape responsibility for choosing to protect the abuse, instead of our children, if they just keep a secret for as little as 18 months. In a society that claims to want to protect the most vulnerable among us, how does that make any sense?” Brauchler said in a statement.

Colorado Attorney General Phil Weiser said he would have to confer with the state's judicial system before deciding whether to appeal the case.

“There is no crime more heinous than sex crimes against a child. As Attorney General, I will do all I can to keep children and communities safe. In this case, we are duty bound to represent the Colorado judicial system and we cannot comment further until we’ve conferred with them,” Weiser said in a statement.

There is already a bill that has been introduced in the state Senate, which is sponsored by Sen. Rhonda Fields, D-Aurora, and Rep. Dafna Michaelson Jenet, D-Commerce City, that would extend the statute of limitations for failure to report suspected child abuse to five years once a child makes “a verbal or written allegation of unlawful sexual behavior to a mandatory reporter,” according to the bill summary.

A similar bill was introduced during last year’s session but did not make it to the governor’s desk.

“I urge the legislature to choose our children over the teachers union, the church and any other special interest group that doesn’t put protecting our kids over their own membership,” Brauchler added.

The bill, SB19-049 , is set for its first committee hearing on Feb. 6 in the Senate Judiciary Committee.

“Mr. Gonzales has devoted his career to the care and education of our young citizens. Mr. Gonzales only learned of the sickening conduct of Brian Vazquez when the police reached out for assistance in their investigation- an investigation he immediately assisted with. Mr. Gonzales had no knowledge of Mr. Vazquez’s predation until the police told him of it. Here, all witnesses were inconsistent with each other regarding whether Mr. Gonzales ever had knowledge and even Mr. Vasquez himself told law enforcement he was surprised to see Mr. Gonzales charged, as he was never involved. Mr. Gonzales was made a scapegoat for the repulsive actions of Mr. Vazquez. Such an attempt to grab headlines detracts from holding the actual predator responsible and minimizes the disgusting conduct of Mr. Vazquez by condemning those who live to protect and educate children.