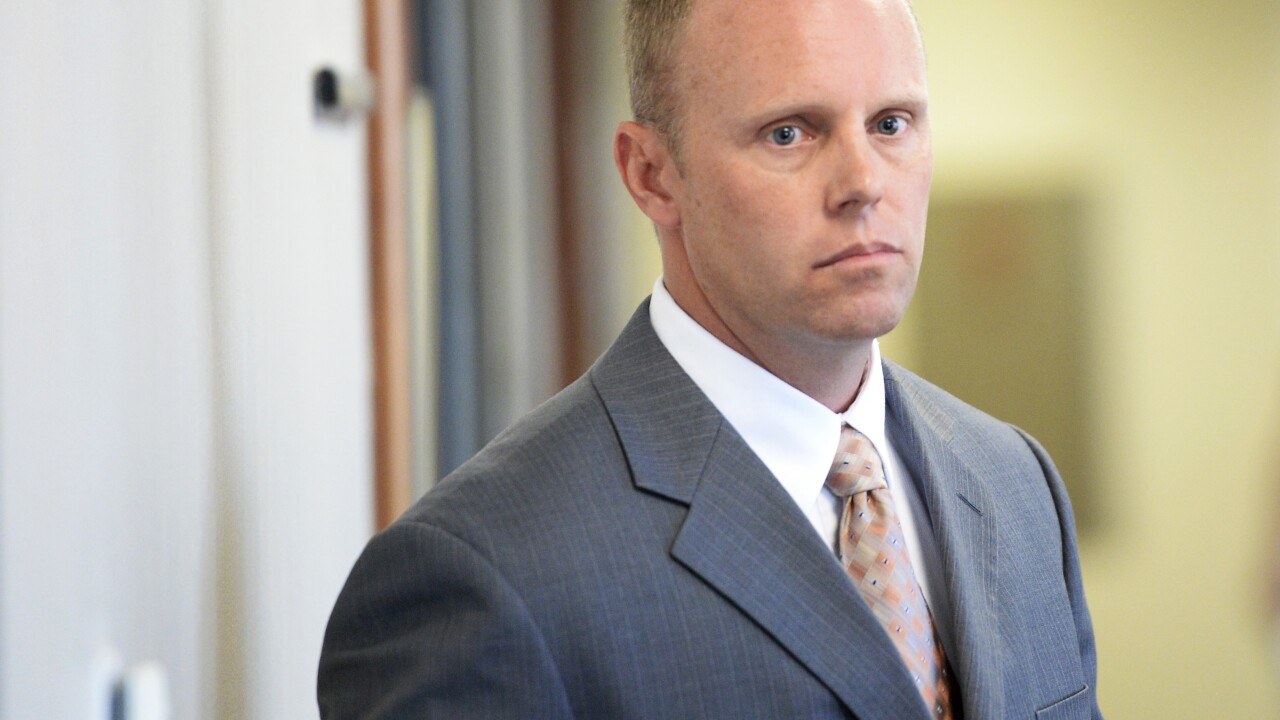 Copyright 2019 Scripps Media, Inc. All rights reserved. This material may not be published, broadcast, rewritten, or redistributed.
RJ Sangosti/DP
CENTENNIAL, CO - JULY 22: Denver police officer Jeremy Ownbey heads into court at the Arapahoe County Justice Center for arraignment, July 22, 2014. Both he and his wife, Jamie Ownbey, are in court accused of leaving their children at home while they went to a dinner party at another Denver cop's home. That party ended in a drunken brawl and included allegations of swinging. (Photo by RJ Sangosti/The Denver Post)

DENVER – A Denver Police Department officer who previously narrowly avoided being fired after a drunken brawl during a party at a detective’s home in 2014 is once again facing termination after he made inappropriate sexual comments toward an intern during a ridealong last July.

The Denver Department of Public Safety wrote a disciplinary letter to Officer Jeremy Ownbey on March 27 notifying him that he faced termination for violating city and department rules regarding the comments made toward the intern.

Ownbey made the comments toward the civilian intern, who was hoping to become a DPD officer herself, during a ridealong on July 3, 2018, according to the letter.

He told the intern, who is not identified in the letter, that a story about him would be coming out later that day about a “swinger event” for which Ownbey’s firing had been recommended, though he ended up serving a 90-day suspension instead.

According to the letter, he told the intern that he took his assignment that day as a “challenge” and that it would be “much worse than anything she could have read about [him] in the news.”

Throughout the day, the letter says Ownbey and the intern only responded to one call for service. But he spent much of the day making crass comments both in her presence and about her toward others, the letter says.

He referred to the woman as a prostitute who had escaped his custody while he talked to a hotel clerk – a comment that was captured on his body camera. He also called the woman the “hot blonde intern” and a “whore,” according to the letter, and at one point made jokes about her and her boyfriend’s sex life and suggested he should leave her on the street, where she could “make a lot of money.”

The letter says he also talked about his genitals in her presence and made a comment about performing “mouth-to-mouth” on her when she told him about a food allergy.

Though the intern did not report the comments that day, she later told an intern program coordinator about them and said she did not initially want to report Ownbey because she both wanted to be hired the department and “did not want to get a reputation as a ‘snitch,’” the letter states.

“I mean I guess I probably should have said something at that point but it was an uncomfortable situation for me because I view him [as] a superior, so I didn’t really – I kind of like looked at him and like rolled my eyes,” the intern told internal affairs investigators, according to the letter.

Ownbey admitted to internal affairs investigators that the comments were “complete inappropriate for any setting” and “could be repulsive to some.”

Westword first reported in January that Ownbey was under investigation once again.

Ownbey’s letter recommending his termination also states that Ownbey was originally terminated from DPD for “serious misconduct” in the swinger-party brawl. But at the time, he was not fired, and his termination was put in abeyance for two years “in part because of his willingness to accept responsibility and his pledge that he would never violate any rule again.” He received a 90-day unpaid suspension instead.

But the comments made toward the intern happened shortly after the two-year abeyance period expired, the letter says, which Deputy Director of Safety Mary Dulacki said violated rules as it was “a willful and wanton disregard of Department values.” She said she believed, based on facts and circumstances of the case, that termination was an appropriate penalty.

“It rose to the level of termination because of the nature of the conduct,” Dulacki said in an interview. “It was completely contrary to the values of the Denver Police Department.”

Ownbey received the letter on March 28 and has since appealed his termination to the Civil Service Commission.