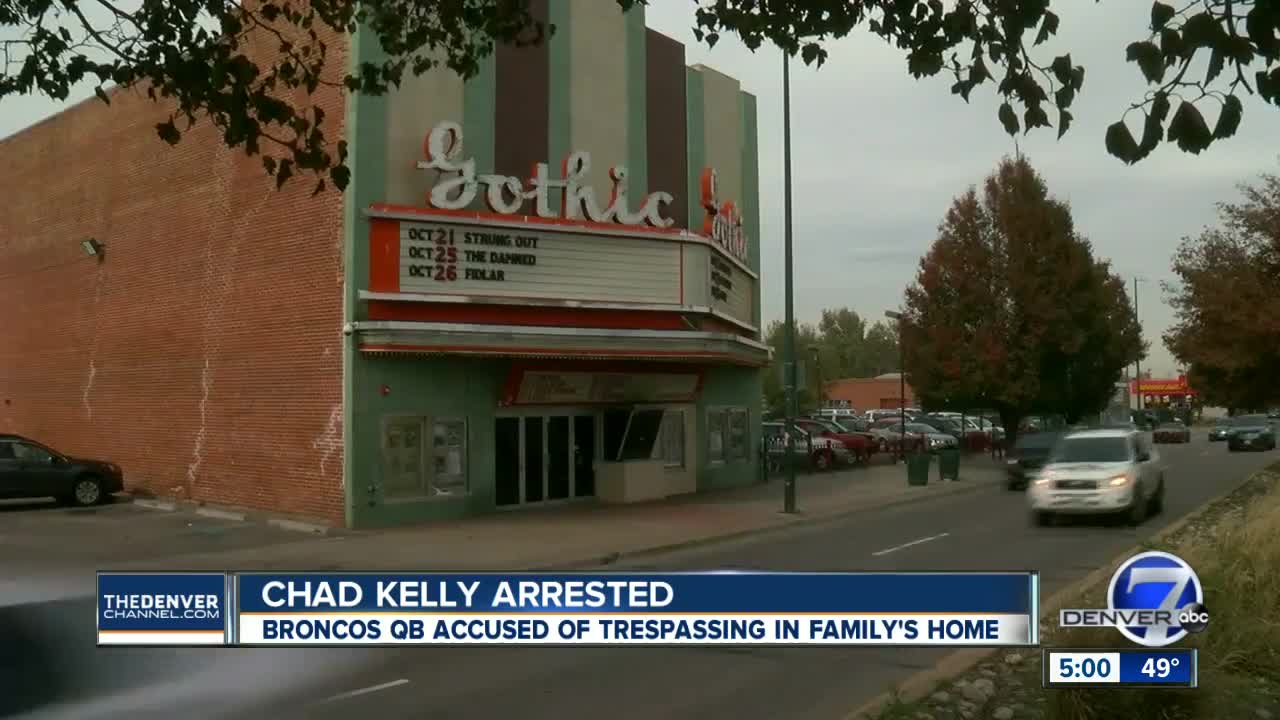 Broncos backup quarterback Chad Kelly was taken into custody Tuesday and charged with suspicion of first-degree criminal trespassing after allegedly standing outside a residence and then entering it, before being chased out by a homeowner. 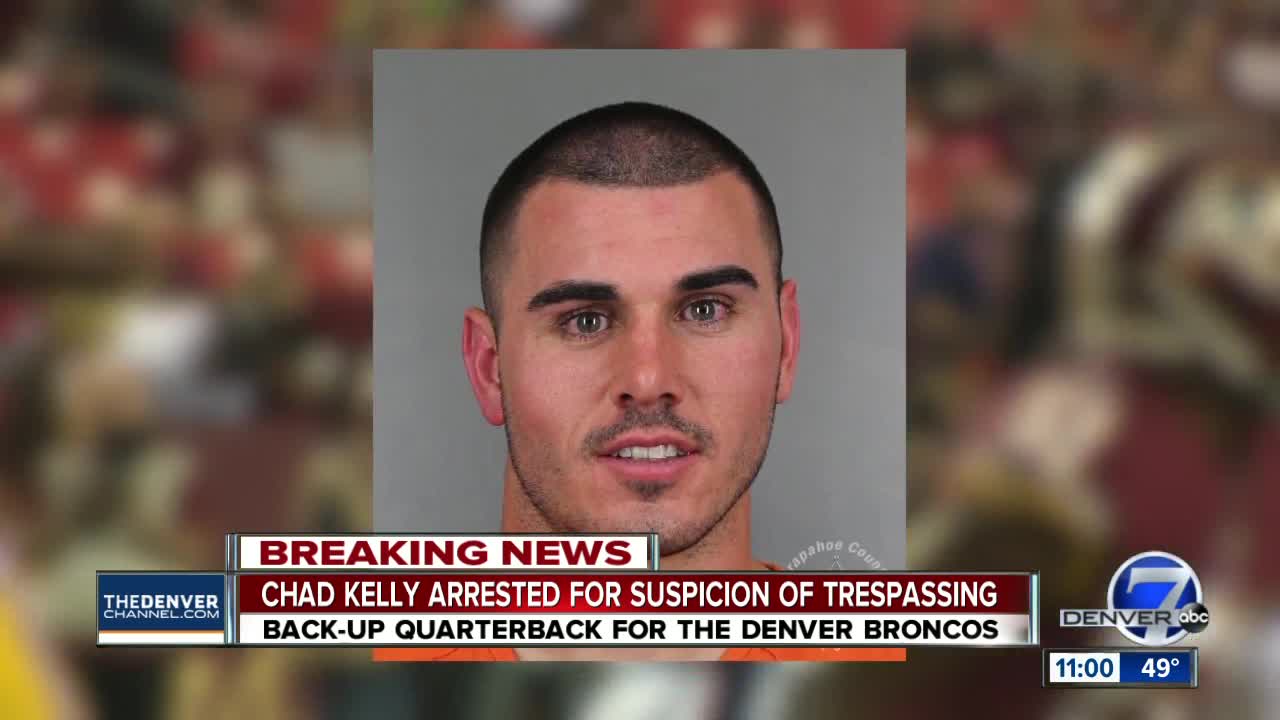 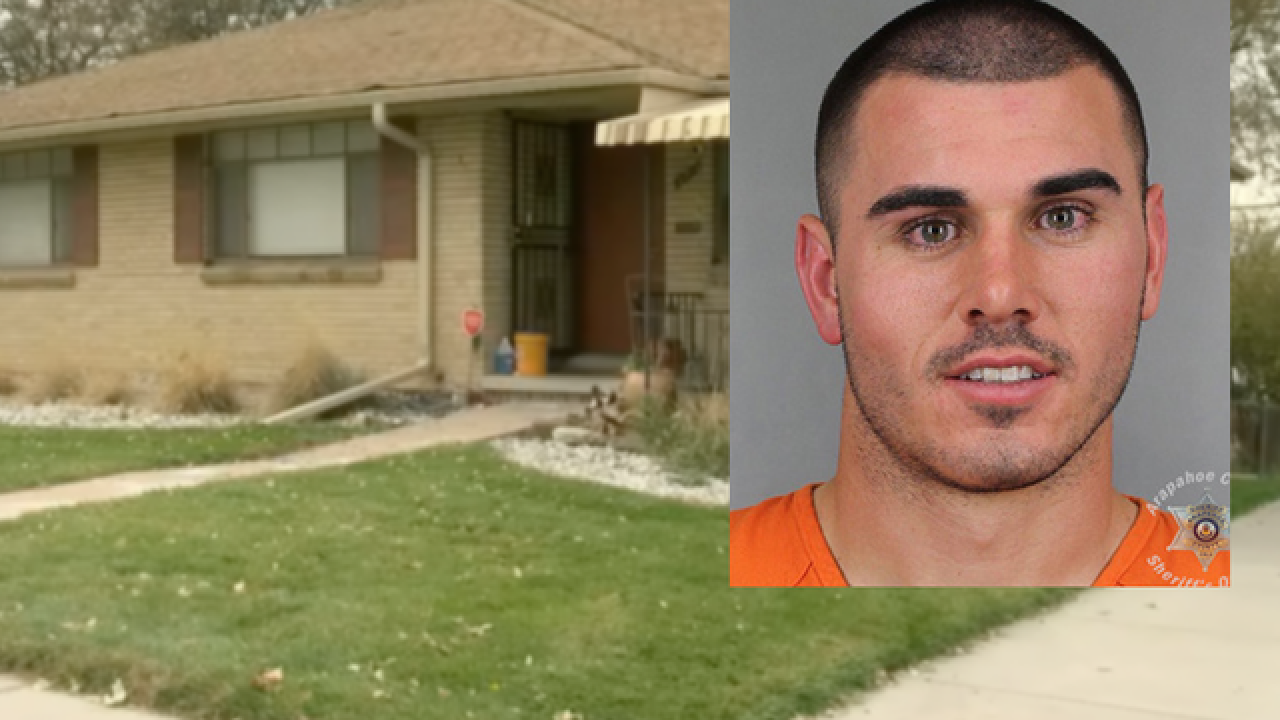 ENGLEWOOD, Colo. — Broncos backup quarterback Chad Kelly was taken into custody Tuesday and charged with suspicion of first-degree criminal trespassing after allegedly standing outside a residence and then entering it, before being chased out by a homeowner.

At 1:17 a.m., officers with the Englewood Police Department responded to the 3200 block of S. Lincoln Street after receiving a report of a man standing outside a home. According to an arrest affidavit, a woman was holding her young child on the couch just inside the front door when the man entered the home uninvited. He sat on the couch next to her and started "mumbling incoherently." The woman called for a male homeowner, who confronted the intruder and hit him with a stick, which was later identified as a vacuum tube, in the upper back and kicked him out of the home.

When police arrived, the male homeowner told them the home's doors were locked, but authorities didn't find any signs of forced entry. The man showed police security video from the front of the house. According to the affidavit, the man's clothes appeared "disheveled" in the video.

Just spoke to one of the residents going into the house where #Broncos backup QB Chad Kelly reportedly entered and was later arrested and charged with first-degree criminal trespassing. @DenverChannel #Denver7 pic.twitter.com/WuZ9n7ezFC

Officers searched the area and a short time later, located a man matching the description provided by the homeowner. He was in a black SUV in front of the Gothic Theatre on S. Broadway, which is about 0.1 miles from the S. Lincoln Street home.

Police identified the suspect as Chad Patrick Kelly, 24. The male homeowner confirmed that he was the same man who had entered the home. Kelly was taken into custody without incident at 1:52 a.m. and charged with suspicion of first-degree criminal trespassing. He was brought to the Arapahoe County Jail and his bond was set at $2,500.

Kelly attended a Halloween costume party at the Gothic Theater hosted by Von Miller on Monday night that has long been a tradition for Broncos players and their significant others.

The Broncos were trying to figure out what happened after Kelly left the party.

The Broncos released the following statement Tuesday: "We are disappointed that Chad Kelly was arrested early this morning. Our organization has been in contact with Chad, and we are in the process of gathering more information."

Broncos General Manager John Elway told Orange & Blue 760 Tuesday afternoon that they are "very, very disappointed in Chad. When the team has a get-together, that’s always a good thing. And the camaraderie that goes along with being team... One person put a dent in it. We are going to look into this. The charges are very, very serious."

A NFL spokesman told Denver7 that they are also "looking into the matter."

#Broncos Kelly likely to face discipline from the team. We will find out what that means this week, whether's demotion or one-game suspension. I can't see him suiting up this week. #Denver7

Kelly, as well as Broncos wide receiver Courtland Sutton, was scheduled for a public signing at Flatiron Crossing Tuesday from 7-8 p.m. with Denver Autographs. The event was cancelled after Kelly's arrest and the following message was posted on the website: "Extremely sorry for the short notice but due to recent events the Chad Kelly public signing is cancelled this evening. We are working with Chad’s agent to possibly re-schedule and will have this time/date announced ASAP. SORRY for the short notice."

This Chad Kelly event has been cancelled. It would have been the most widely attended signing by media in decades. #Broncos. #Denver7

The Broncos drafted Kelly with the final pick of the NFL draft in 2017. After spending last season rehabbing injuries and losing weight, Kelly earned the backup job, beating out former first round pick Paxton Lynch. Part of the reason Kelly’s draft stock suffered was because of several off-field incidents in college involving issues with coaches and trouble with the law. Kelly could face league discipline for the latest incident. The league, per protocol, reviews these incidents to determine if there is a violation of the personal conduct policy.

Kelly is scheduled to appear at the Arapahoe County Justice Center Wednesday at 8:30 a.m. for his advisement hearing.