Suit: District, admins "failed to effectively to protect her" 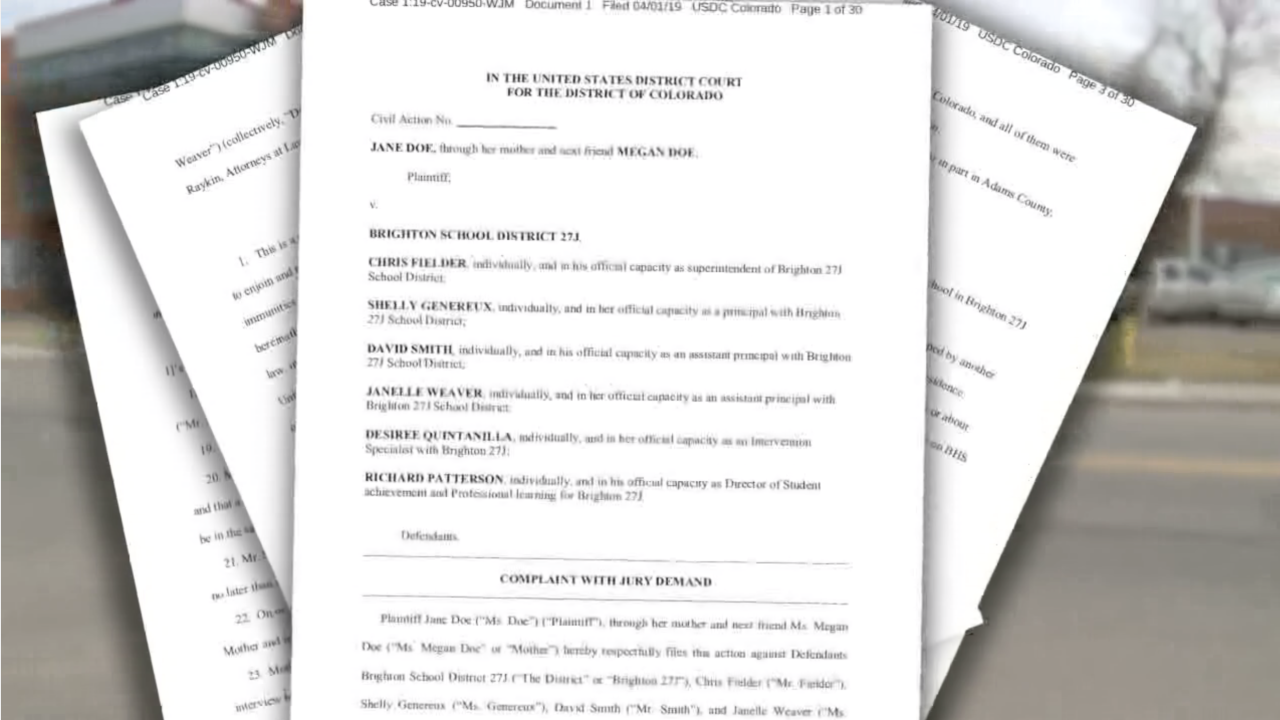 Copyright 2021 Scripps Media, Inc. All rights reserved. This material may not be published, broadcast, rewritten, or redistributed.
Denver7
A Brighton High School student is suing Brighton School District 27J, its superintendent and her high school’s administrators in federal court over allegations she was raped by a fellow student and that the administrators violated Title IX and other federal code in failing to protect the girl from bullying and harassment after the alleged assault. 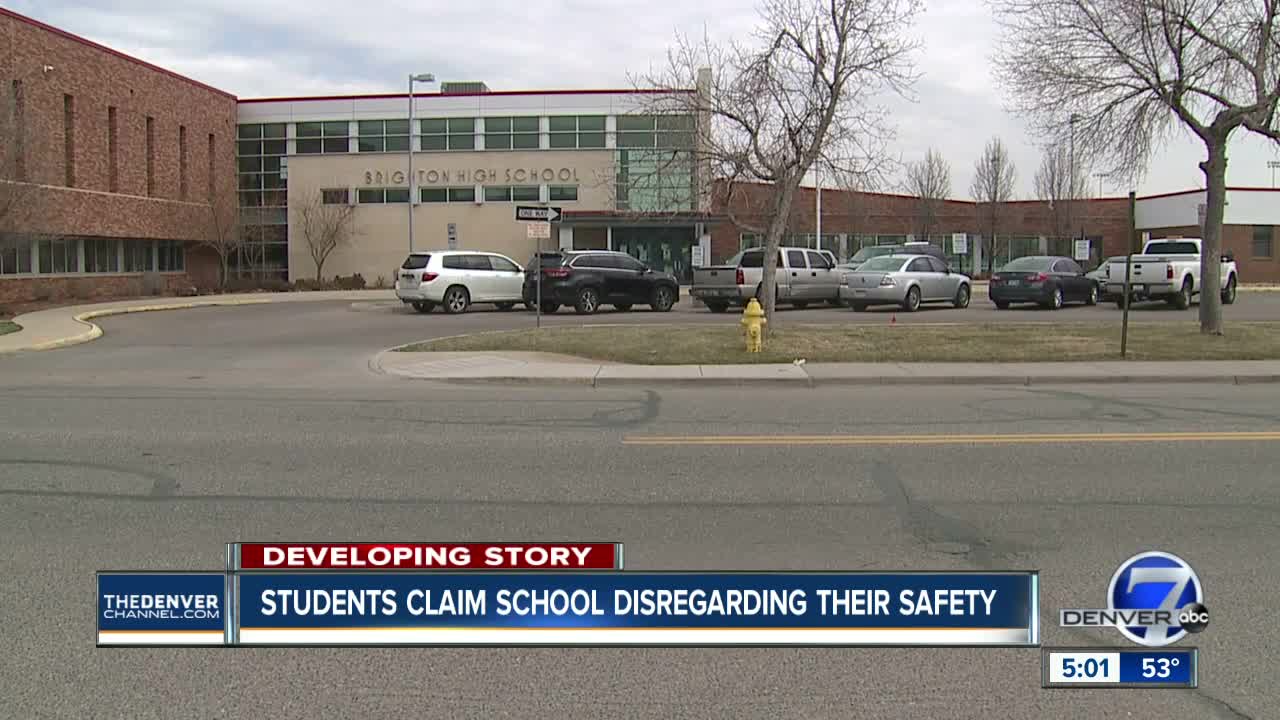 DENVER – A Brighton High School student is suing Brighton School District 27J, its superintendent and her high school’s administrators in federal court over allegations she was raped by a fellow student and that the administrators violated Title IX and other federal code in failing to protect the girl from bullying and harassment after the alleged assault.

The lawsuit, which was filed in the U.S. District Court of Colorado, comes from a student referred to in the lawsuit as “Jane Doe” – a common legal alias for victims of sexual assault.

The suit asks a judge to find that the district and administrators violated U.S. code, Title IX and the Fourteenth Amendment’s Equal Protection Clause. The victim is seeking declaratory and injunctive relief from the court, asking for temporary and permanent restraining orders to be put in place to keep the victim from being harassed, and for court costs, attorney’s fees and any other relief the court finds proper.

“On multiple occasions, Ms. Doe and Mother spoke to Defendants about the sex-based discrimination she was experiencing at BHS, and they failed to effectively to protect her from the constant intimidation, harassment, and bullying she was experiencing as a victim of sexual assault and rape,” the lawsuit states. “Rather than protect her, they instead protected the person who sexually assaulted and raped her and another BHS student.”

The lawsuit claims that the student accused of raping the plaintiff in the lawsuit had also raped another student beforehand. The lawsuit says that the first alleged rape happened in May 2018 and that an Adams County Sheriff’s Department detective had told school administrators at the time of the initial assault.

According to the suit, when Doe was allegedly raped in September 2018 and continued to allegedly be sexually assaulted by the same student in following weeks while they were at school, the same detective called the victim’s mother to report that the student had sexually assaulted her daughter, as well as the girl in May 2018.

The lawsuit claims that school officials had been told by the detective of the sexual assault of the first student shortly after it happened, and that the same detective informed Smith on Nov. 1 that the student had assaulted Doe as well.

At the time, the detective told Smith, according to the suit, that the alleged assailant “need to be segregated from Ms. Doe and that a safety plan for Ms. Doe had to be put in place because she and [the alleged assailant] could not be in the same class.”

Doe had been withdrawn at school in October, the school’s counselor reported to Doe’s mother. But even as of Nov. 5, according to the lawsuit, school administrators had taken no action against the student despite being told of the second alleged assault days earlier.

The student filing the lawsuit told Denver7’s partners at the Denver Post, who first reported the story, that when she finally gathered the courage to tell a school counselor, that counselor warned her to be careful because it could ruin someone’s life. She decided not to report it to police.

When the girl’s mother spoke to a school counselor the next day, the counselor reportedly told her that “the only options for Ms. Doe were to change schools, leave class five to ten minutes early to avoid other students in the hallways, or to use homebound services,” the lawsuit states.

The student who is accused of raping the two girls was not removed from the school at the time, according to the suit.

But the girl and her mother continued to report that the boy and friends of his were intimidating the girl and bullying her. At time, the girl came home covered in hives because of the stress she underwent, the suit says. It says that both reported the intimidation to administrators, including the counselor.

Doe allegedly spoke with the counselor in early November and told him “she felt that she was being punished for speaking up and that she is tired of the school because it hurts victims,” the suit says.

But the bullying and intimidation continued on a daily basis, according to the lawsuit. The girl’s mother told Weaver that her daughter “wanted to die” because of the alleged abuse, and continued to prod officials as to why the student accused of rape had not been disciplined.

Weaver allegedly told the mother that the student “had just as much of a right to be at BHS as Ms. Doe had” and that they couldn’t do anything until charges were filed, despite there being both state and federal laws that allow administrators to suspend or expel students due to behavior that “is detrimental to the welfare or safety of other pupils,” as the Colorado statute is written.

The girls’ mother wrote an email to the counselor saying she felt that girls shouldn’t report rape because of the way her daughter’s rape was handled at the school.

“This school is making her the victim feel as if she did something wrong. I’m very disappointed in how this is being handled on ever end and I encourage girls to not speak up because honestly it’s not worth it. Not at this school,” the mother wrote.

The student alleged to have committed the sexual assaults was suspended on Nov. 8 for five days, according to the lawsuit – a week after the detective had told school officials about the second alleged rape.

Another counselor recommended Doe see a pediatrician for a prescription for depression medication the next day, according to the lawsuit, and Smith told the girl’s mother he was unaware of the bullying her daughter was experiencing.

The girl’s mother asked officials for outside education plans because of how her daughter was being treated at school, and the girl reported “that she did not want to live, and that she wished she would have just kept quiet,” according to the suit.

The bullying and intimidation continued into the next month, according to the lawsuit. The girl experienced panic attacks after seeing her alleged assailant back on campus, and the suit says that the high school accidentally told the student he was allowed back on campus.

But one of the administrators told the girl’s mother that the only way her daughter could avoid the boy “would be for Ms. Doe to stay at home and not come to BHS campus,” according to the suit.

It says that the girl’s emotional state continued to deteriorate, that she was diagnosed with “severe PTSD, anxiety, and depression” and that her mother had to take her to a hospital because she threatened suicide.

Still, according to the suit, the intimidation continued.

The boy’s girlfriend allegedly messaged Doe in early February on Instagram, threatening her over the allegations and saying Doe was “seeking attention and lying about sexual assault and rape,” the suit states.

After receiving the messages, Doe attempted suicide, according to the suit. The school made the boy’s girlfriend sign a contract saying she wouldn’t contact Doe again, it says.

She has not returned to Brighton High School and is taking classes from home, the suit states.

It alleges violations of the Fourteenth Amendment’s Equal Protection Clause and Title IX laws that prohibit discrimination at public schools, among other places. The suit claims the district and school administrators knew of the allegations against the boy, were indifferent to the harassment Doe was undergoing, and that the harassment deprived Doe of her rights to an education. It also says the district and administrators protected the student accused of rape.

“Brighton 27J elected to shelter and harbor a male student who sexually assaulted a female student in May 2018 and who would go on to sexually assault and rape Ms. Doe, his second victim, by failing to remove him from BHS grounds despite their knowledge of his sexual assault,” the suit states.

A Brighton High School parent, Wenona Robertson, told Denver7 she only found out about the allegations from an email sent out on Monday.

“It makes me wonder what else is going on here that the school district is trying to cover up,” said Robertson.

In an email home to district parents, Fielder, the district’s superintendent, said the district could not comment on the case due to ongoing litigation.

“We are aware of the recent filing of a lawsuit against 27J Schools and subsequent media attention. We understand you may have questions or concerns, but due to the fact that this is ongoing litigation we are unable to comment on any matters related to this case,” Fielder wrote. “Please be assured the safety and security of our students is our top priority.”