ACLU: Aurora PD has disturbing pattern of officers accused of violating the rights of black people

AURORA, Colo. -- The American Civil Liberties Unions (ACLU) is speaking out about a trend of what it calls questionable police conduct involving people of color in Aurora.

"We have a very disturbing pattern of incidents in which Aurora police are accused of violating the constitutional rights of people of color," said Mark Silverstein ACLU's legal director.

The ACLU created a map (click link to view in full; map embedded below) that Silverstein said highlights six recent cases from March of 2015 to March of 2016 where officers have gone too far. 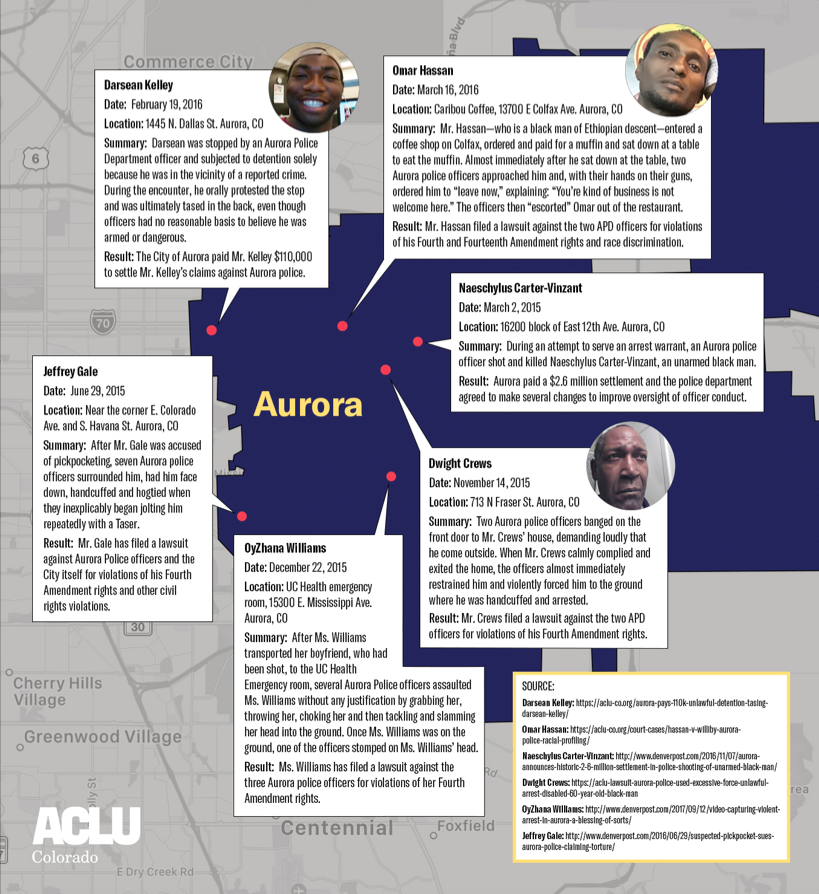 Silverstein said the civil liberties group has filed suit in two of the cases, and the Aurora Police Department has agreed to settle another case for $110,000.

In the case APD settled, the incident was caught on body camera video.

The footage from February 2016 shows officers using a Taser on Darsean Kelley -- an African-American man Silverstein claims was stopped for simply walking down the street near an area where police were called to investigate reports of man pulling a gun on a child.

"Darsean Kelley is obeying the commands, he has hands up in the air, and he says 'I know my rights' and police tase him and he falls straight back and hits his head on the concrete," Silverstein explained.

Another incident happened in March 2016 at an Aurora Caribou Coffee. In that case, Silverstein said the ACLU has filed suit against the department claiming they racially profiled Omar Hassan.

"Two officers came over to him with their hands on their guns and they said he had to leave and he said 'why' and they said, 'Your kind of businesses is not welcomed here,'" Silverstein explained. "Completely unjustified exclusion from a place of business, and the owner of the coffee shop says we didn't ask him to leave. We want his business."

The Aurora Police Department provided the following statement to Denver7:

The ACLU of Colorado, with reference to this map, has stated that there is a “disturbing string of incidents in which Aurora police have abused and violated the Constitutional rights of people of color.”

The six cases, occurring during a one-year span from March 2015 and March 2016, represent a very small number of the thousands of contacts, criminal or otherwise, between the Department’s officers and people of color.  Further, the circumstances of each case are different, as are the reasons for the City’s response (settlement or defense) to the matter.  The Department works tirelessly to enhance community relations between officers and all citizens and visitors to Aurora.

The Aurora Police Department would like the public to know the following: