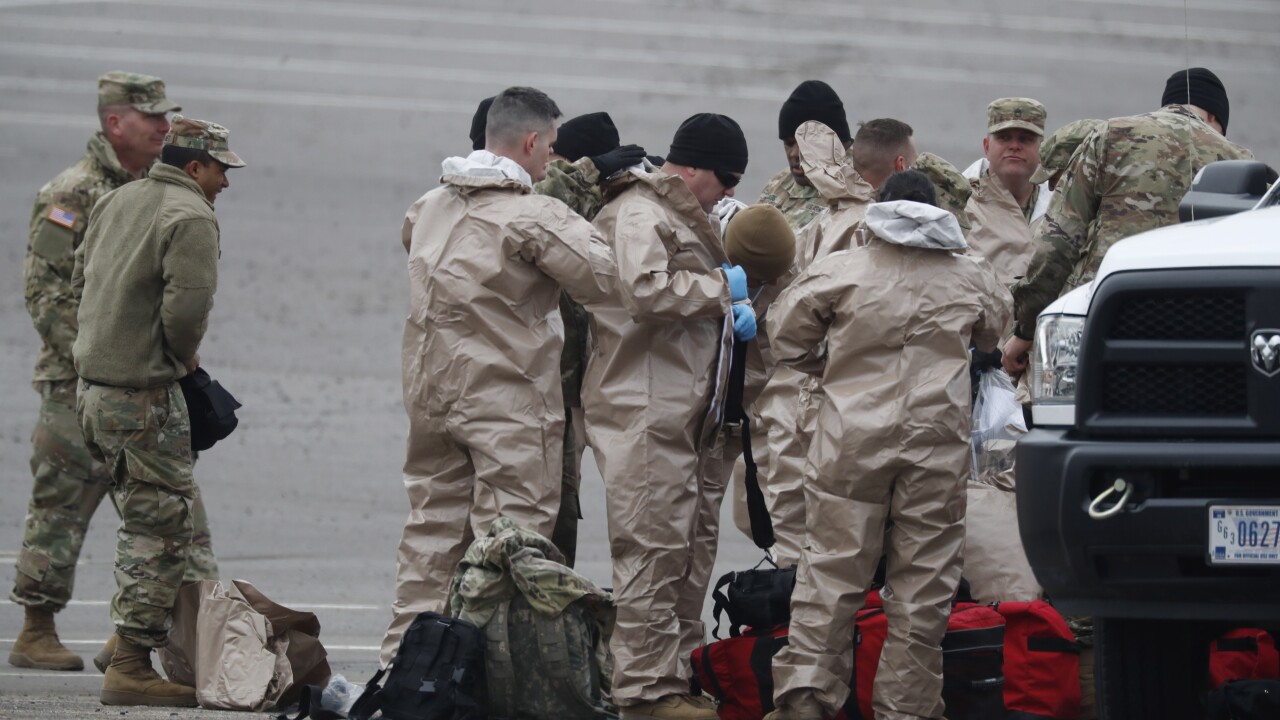 (Copyright 2020 The Associated Press. All rights reserved. This material may not be published, broadcast, rewritten or redistributed.)
David Zalubowski/AP
Colorado National Guard medical personnel suit up to perform coronavirus tests on motorists at a drive-thru testing site outside the Denver Coliseum Saturday, March 14, 2020, in Denver. Officials planned to administer 150 tests but the line of vehicles wrapped around three city blocks. For most people, the new coronavirus causes only mild or moderate symptoms. For some it can cause more severe illness.(AP Photo/David Zalubowski) 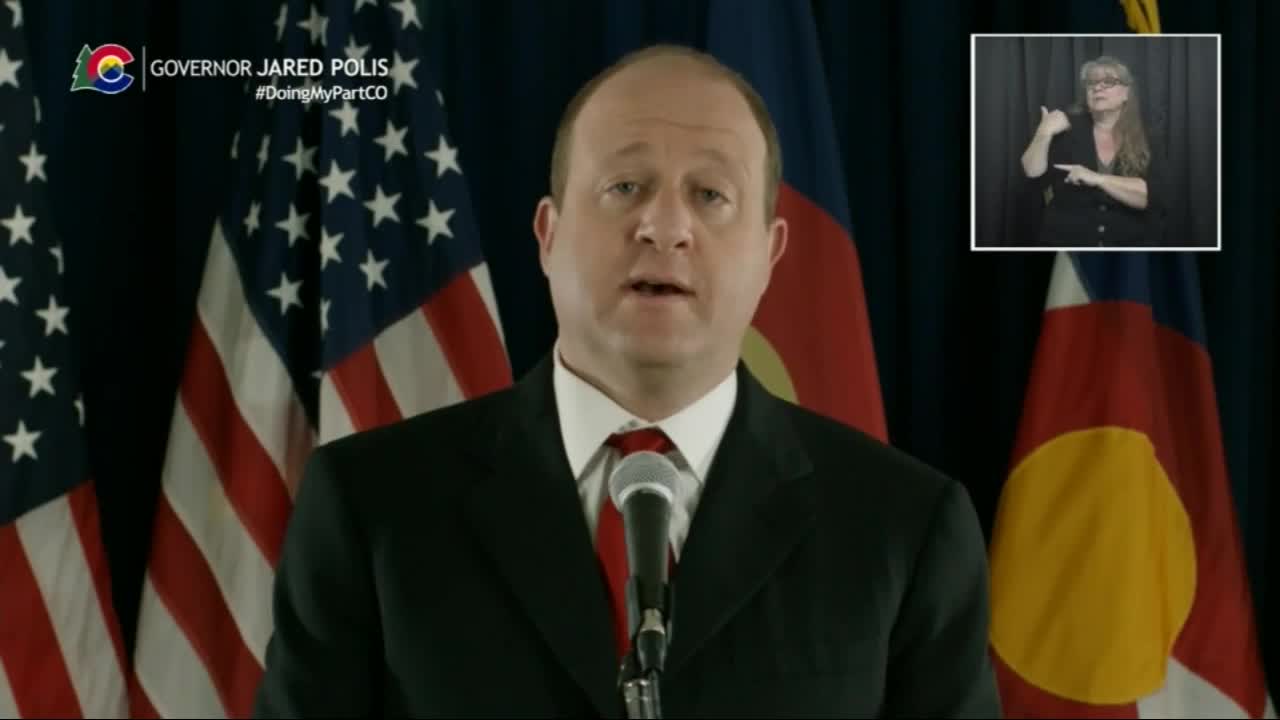 DENVER – President Trump said Thursday that he would extend the deployment of the National Guard, which is helping in COVID-19 efforts in Colorado and around the country, into August following bipartisan pressure from Colorado’s governor and members of Congress, and from lawmakers across the country.

“The men and women of the National Guard have been doing a great job fighting the CoronaVirus. This week, I will extend their Title 32 orders through mid-August, so they can continue to help States succeed in their response and recovery efforts,” Trump tweeted Thursday morning.

The Trump administration has not yet publicly released the details about the extension of Title 32, which it had been set to terminate on June 24, a day before many of the 40,000 National Guard members who are currently deployed were to qualify for full retirement, education and other benefits.

Gov. Jared Polis said at a news conference Thursday afternoon that he was still awaiting the formal announcement from the federal administration but welcomed the news, saying it is “the right thing to do.”

“It would have been deeply unfair to the National Guard’s men and women who left their day jobs to serve us all if they had been denied benefits,” Polis said.

The Colorado National Guard has had hundreds of members supporting the state’s response, particularly in building up community testing sites and training civilians, providing logistical support for supply distribution, planning for the build-up of Emergency Operations Centers and supporting extra shelters for people experiencing homelessness. The National Guard has received widespread praise from state officials for its support.

The end date has been on the radars of Colorado officials for weeks. On April 29, the full Colorado congressional delegation sent a letter to President Trump calling for an extension of Title 32 through the end of the year, with monthly assessments, in support of Gov. Polis.

“We share the Governor’s concern that prematurely ceasing federal funding for National Guard COVID-19 support operations will hinder Colorado’s ability to respond and could contribute to a possible second wave of infection,” the members of Congress wrote at the time.

The extension was made through June 24 on May 8, but the pressure continued.

In a news conference on May 20, Gov. Polis praised National Guard members for their response – the largest deployment since Hurricane Katrina – and said that while he was pleased to see Title 32 extended to June 24, it needed to be for longer because the members would be one day short of being able to qualify for the benefits.

“This is wrong to deprive them of one day of duty and thereby deny them the benefits they earned by putting themselves at risk,” Polis said, adding that if the extension was not granted, it would hurt the state’s COVID-19 response and do “a huge disservice” to the National Guard members.

“The state’s ability to test, to monitor, and to respond to this crisis would be diminished without the brave guardsmen and women,” the governor’s office said at the time.

That same day, Politico reported more details about the June 24 deadline, which Rep. Jason Crow, D-Colo., who is also a former National Guardsman, said was an “abuse of trust” by the administration.

“Talk is cheap. Let’s not just say that we support our troops and their families, let’s actually do it. Artificially ending National Guard deployments the day before benefits kick in is just plain wrong,” Crow said.

Two days later, Crow, Sens. Michael Bennet (D) and Cory Gardner (R), and Rep. Doug Lamborn (R) led a letter that was also signed by Colorado Reps. Joe Neguse (D), Ed Perlmutter (D) and Diana DeGette (D), and more than 120 other members of Congress from both parties, pushing the administration to ensure that National Guard members were able to receive their benefits.

“We believe that the service of National Guard members during this unprecedented emergency is deserving of the recognition intended by educational and retirement benefit programs in the spirit in which they were created,” the lawmakers wrote in the letter to President Trump, Defense Secretary Mark Esper and FEMA Administrator Peter Gaynor.

“We encourage you to be inclusive of pandemic response affiliated military service to ensure that National Guard personnel are not being inappropriately prevented from accessing the benefits earned by their service,” they added.

While several Colorado congressional offices said they had not received official word from the administration about the extension early Thursday afternoon, WOWK in West Virginia reported that the governor there had been notified. Similar reports were coming out of Michigan and some other states.

“I was pleased to learn this morning the White House is planning to extend Title 32 orders for the men and women of the National Guard until mid-August,” Nevada Gov. Steve Sisolak (D) tweeted Thursday morning. “Our @nvnationalguard has proven vital on our COVID19 prevention efforts in Nevada.”

Crow said he was thankful for the extension but said it shouldn’t have taken such public pressure for the administration to act.

“We are happy to hear that the Administration has heard our calls and changed course on the National Guard deployments. But it shouldn’t take public outcry and Congressional action for the Administration to honor the service of our citizen soldiers,” Crow said. “We don’t know what the next stage of the coronavirus looks like, but we do know that the work of our National Guardsmen and women will be necessary in the fight to keep our communities safe. Supporting our troops is more than a bumper sticker slogan, it’s a promise to provide the benefits they have earned.”

Lamborn tweeted thanks to Trump for the extension.

“Thank you @realDonaldTrump for addressing our letter,” he said. “We must ensure that the National Guard receive the benefits they have earned.”

“The National Guard is playing a critical role in our country’s fight against #COVID19,” Bennet tweeted. “We’ve been calling for this extension and want to ensure these men and women receive the benefits they have earned.”

Gardner said in a statement that he was pleased by the extension.

“National Guard servicemembers all over the country have been on the front lines of the COVID-19 pandemic and their work has been critical in combatting and containing this virus,” Gardner said in a statement. “I’m pleased that President Trump has committed to extending the Title 32 orders for National Guard servicemembers so they may continue their tireless work to keep us safe and receive the benefits they have earned. I will continue to work with my colleagues and the Governor to ensure Colorado and our brave servicemembers have the resources they need to defeat this pandemic.”

A Colorado National Guard spokesperson emailed back late Thursday afternoon saying they were working getting an official answer soon.