These are the Denver neighborhoods hit hardest by coronavirus, according to Denver Health 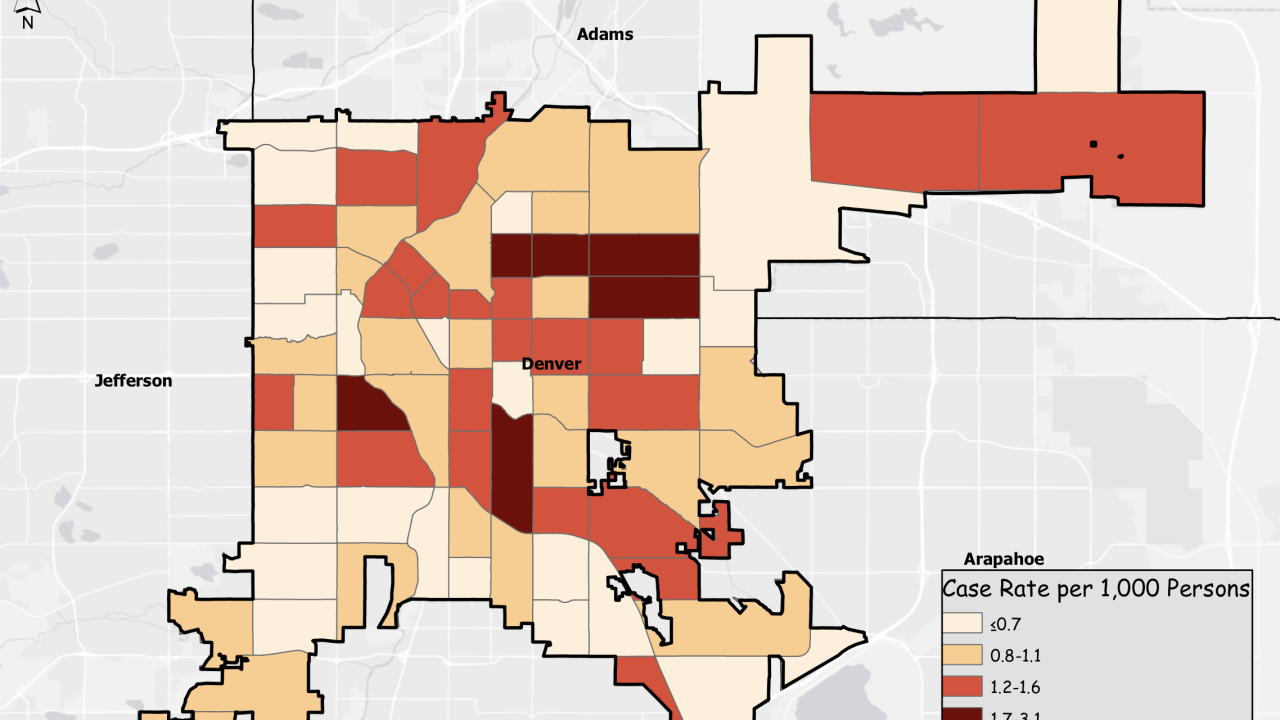 Denver Health
Data received from Denver Health shows that neighborhoods with a higher population of Hispanic and black residents are being affected the most by the novel coronavirus and the disease it causes, COVID-19.

DENVER – Everyone is at risk of contracting the fast-spreading novel coronavirus, but new data from Denver Health is shedding some light into who’s being most affected by the disease in the Mile High City.

A breakdown of the data obtained by Denver7 Thursday afternoon shows Park Hill (both north and south), Washington Park, Skyland, Whittier, and Valverde are the neighborhoods with the highest infection rates of COVID-19 throughout the city – with about two and three positive cases being reported per 1,000 people in those neighborhoods.

Not far behind are areas like Globeville, Athmark Park, Virginia Village and Montbello – neighborhoods with a higher population of Latino and black residents.

The statistics are not all that surprising, however, according to research.

Research from the Centers for Disease Control and Prevention (CDC) shows that among Hispanics and blacks aged 60-79 (an age group at higher risk of severe illness from COVID-19), the prevalence for diabetes or diabetes accompanied by cardiovascular disease was twice as high than among non-Hispanic whites.

Those numbers, coupled with the fact that Hispanics and blacks are less likely to be insured and much less likely to be able to work from home as they work in jobs which are considered essential, create racial disparities that negatively affect those populations.

In Denver, for example, the data provided by local health officials shows that Hispanics come in second for cases of COVID-19 at 24%, followed by 16% of people who did not specify their race or ethnicity. Non-Hispanic blacks came in third at 13%.

Non-Hispanic whites led the number of positive cases when it comes to race and ethnicity at 40% — which makes sense, considering 54.5% of Denverites are white and non-Hispanic while about 29.7% are Hispanic/Latino and about 9.8% are black, according to Census data.

And while COVID-19 is affecting older populations the most, that’s not the case here in Denver.

People in their 30s have reported the most cases of the new virus in Denver with 20% being affected in that age group, followed by populations in their 20s and 50s.

In Denver, those aged 60-69 – the highest number of reported cases in that age group for the whole state – only amounted to 12% of cases.

“That said, it is very important to note that everyone is at risk of COVID-19, and everyone needs to take this seriously,” said a spokesperson with the Denver Joint Information Center. “Stay at home, practice social distancing if you must go to work or leave home for essential errands, wear a face covering to protect those around you, wash your hands for at least 20 seconds, and avoid hugs, shaking hands, and other forms of contact.”