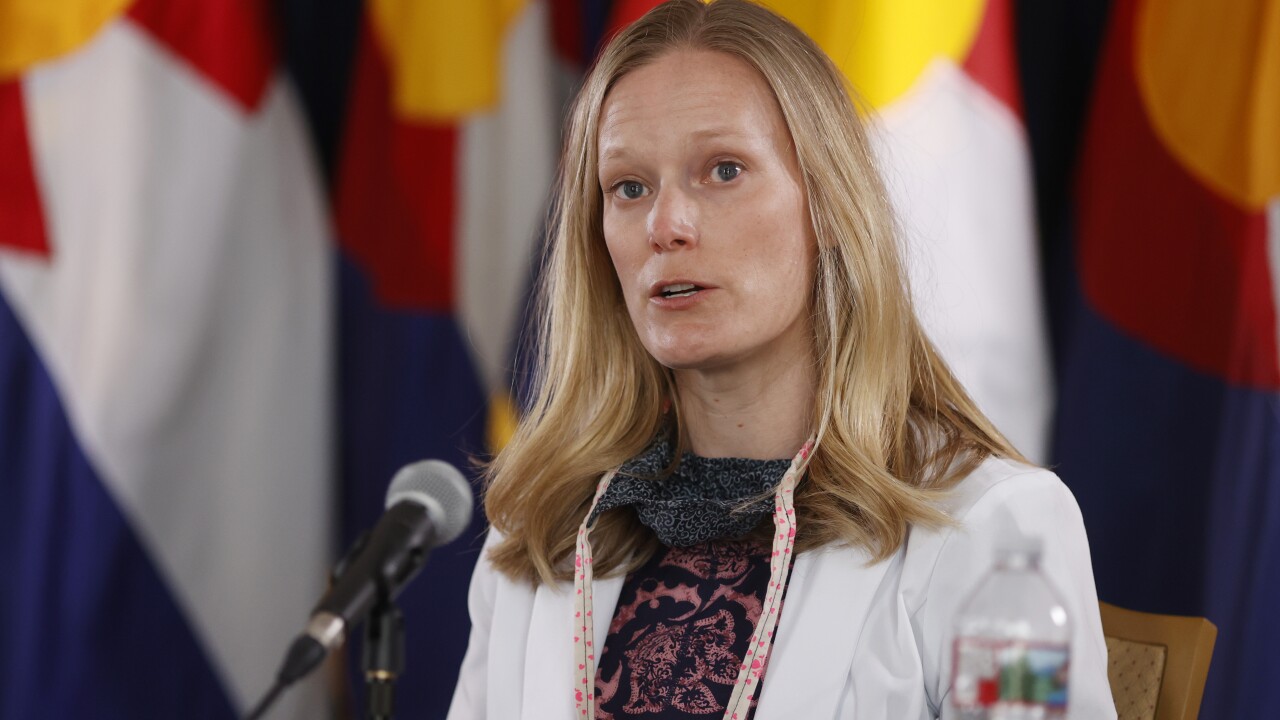 (Copyright 2020 The Associated Press. All rights reserved. This material may not be published, broadcast, rewritten or redistributed.)
David Zalubowski/AP
Dr. Rachel Herlihy, lead epidemiologist for the Colorado Department of Public Health and Environment, makes a point during a news conference to update the state's efforts to stop the rise of the coronavirus Wednesday, May 20, 2020, in Denver. (AP Photo/David Zalubowski) 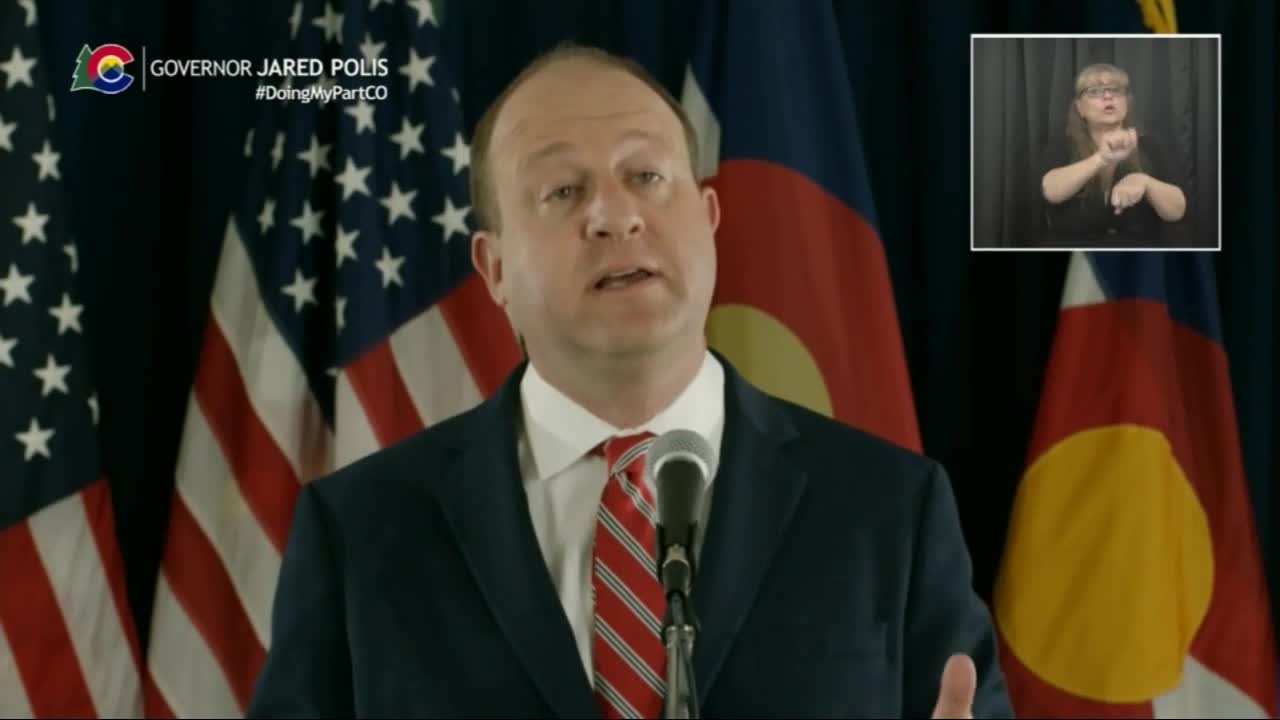 DENVER – Coloradans of all ages, but particularly adults over age 60, will have to keep up strong physical distancing measures and continue to wear masks in the coming months – as most businesses begin to slowly reopen – in order to prevent the state’s health care system from being overrun later this summer, state public health officials said Tuesday.

Coloradans will have to keep up physical distancing and limiting their social interactions to half, or ideally one-third, of what they were before the COVID-19 outbreak started in order to prevent that overload in August and September, officials from the Colorado Department of Public Health and Environment and Colorado School of Public Health said in a briefing, citing the latest modeling data.

But for older Coloradans aged 60+, it will be pertinent for them to keep social distancing levels at 65% less of what they were pre-coronavirus, or at even higher rates, in order to prevent the state from running out of ICU beds and ventilators.

According to the latest modeling report from the School of Public Health, if the state moves to social distancing levels of 55% less than they were in February (they say levels were about 80% during the stay-at-home period), then older adults will need to maintain the same levels of social distancing they did during the stay-at-home phase in order to avoid exceeding hospital capacity.

“If only half of older adults adopt high levels of social distancing under a 55% social distancing scenario, the state is at risk of exceeding hospital capacity this summer,” modeling officials wrote in their May 23 report.

Under the safer-at-home phase, older adults and those with pre-existing conditions that make them more susceptible to complications from COVID-19 are still advised to stay home except when necessary.

“We need to have maintained social distancing and ensure that those who are the most vulnerable are aware they should take measures to protect themselves,” said Dr. Jon Samet, with the Colorado School of Public Health.

Ideally, according to the models, all Coloradans can maintain social distancing levels of 65% or more indefinitely, which would keep hospitals from being overwhelmed, the officials said. As of Monday, there were a combined 560 confirmed or presumptive COVID-19 patients hospitalized in Colorado and 349 of 1,081 ventilators were in use.

But the public health officials made clear that the amount that those higher-risk populations can stay home and keep from interacting with other Coloradans, the better chance they would have of not getting sick or having to be hospitalized when case counts are expected to increase later this summer.

“Around mid-August, the date at which schools generally open, the epidemic curves under all scenarios are rising,” modeling officials wrote in the report.

They said that older adults should continue staying home whenever possible, washing their hands, and watching for typical COVID-19 symptoms. They should also have a plan for medical care and emergency contacts and for how to cope with stress and anxiety as the months go on. Officials also said that caregivers, family members and neighbors should reach out to help those who are more vulnerable by socializing with them online, through letters, or at distance and help them get groceries and run other necessary errands.

Samet and the Colorado School of Public Health, which is leading the modeling team along with other state university and hospital officials, said the modeling team was starting to see the effects of the first wave of the safer-at-home phase, which about half the state’s population entered starting April 27.

The data show the curve for hospitalizations continues to fall. But the officials said that another week of data, which would include the metro area’s move to the safer-at-home phase, would provide more insight.

The data show the virus had a reproductive value of less than 1 during early May, which Samet and CDPHE State Epidemiologist Dr. Rachel Herlihy said was a good sign, but that more data would be needed to determine if it has stayed at that level through the rest of May as business started to reopen and Coloradans started moving around more.

“The uncertainty highlighted in this report regarding the current course of the COVID-19 epidemic under Safer at Home, will lessen over the coming days,” the modeling report said. “Estimates of the trajectory of the outbreak under Safer at Home will be valuable for making decisions concerning further relaxation of social distancing.”

Herlihy presented data showing how older Coloradans have overwhelmingly been the population hit hardest in terms of hospitalizations and deaths due to COVID-19.

But the puzzle piece that public health officials are still working to better understand is the number of asymptomatic people who can spread the virus – including some who officials say might not show symptoms of the novel coronavirus throughout the entirety of their illness.

Modelers now estimate about 170,000 Coloradans have or had COVID-19 – about 2.9% of the state’s population. CDPHE Executive Director Jill Hunsaker Ryan said that indicates “we’re still at the beginning of the epidemic.”

Samet said that some people are asymptomatic throughout the course of their illness, while others might shed virus for days before they develop symptoms. He said that the percentage of people who were asymptomatic was not fully clear but was possibly “more than 50% of cases.”

Herlihy said that the largest number of asymptomatic cases so far appear to involve children and younger adults.

The officials said the state was still committed to getting students back to school in the fall, but they were still working to find better answers about the role of children and schools in spreading the virus, as well as the new information scientists are discovering about the virus every day, such as the asymptomatic cases and the onset of the mysterious new inflammatory illness, MIS-C.

And Ryan was clear that health officials were continually modifying their modeling data with new information and that Gov. Jared Polis was considering changes to policies on a monthly basis – decisions informed by the data.

He said the state has reached is goal of having the ability to test up to 8,500 people per day and that on Friday, more than 6,000 Coloradans were tested.

He also announced that the state had secured a 17-month contract with Honeywell to obtain 6 million N95 masks to try to keep frontline workers safe.

He said that the School of Public Health models were one of several his office looks at when making decisions but that it was not determinative. He said that the models would have better modeling data, and the state better real-time data, to look at the next steps for July, August and the months afterward as the weeks go on.

Ryan said officials were not sure what policies will look like in July or August as more data is collected and policies change. But all three were clear that the return to “normal” wouldn’t be happening anytime soon.

“We are in this for the long haul,” Ryan said.