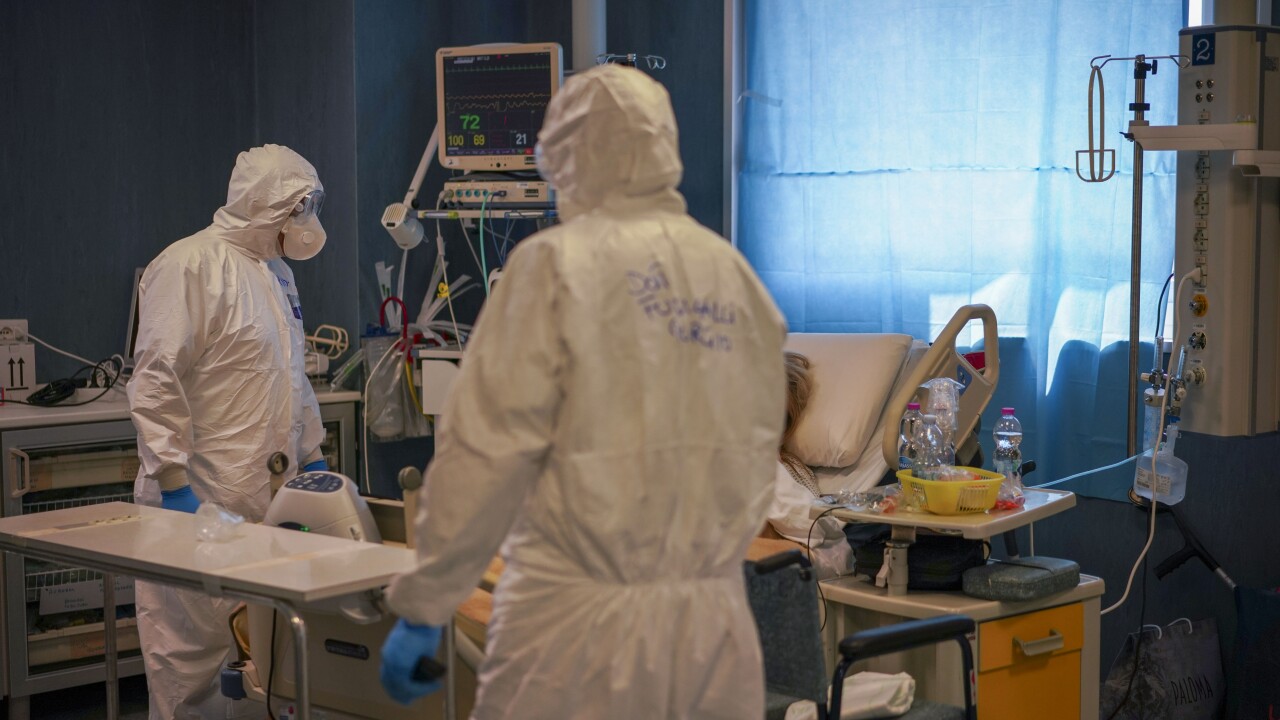 Copyright 2020 The Associated Press. All rights reserved
Andrew Medichini/AP
Medical staff tends to a patient in the ICU unit of Rome's San Filippo Neri Hospital's Covid department, in Rome, Thursday, April 9, 2020. The new coronavirus causes mild or moderate symptoms for most people, but for some, especially older adults and people with existing health problems, it can cause more severe illness or death. (AP Photo/Andrew Medichini)

DENVER – New COVID-19 modeling data predicts the state of Colorado will exceed the April peak in hospitalizations within the next few months if Coloradans don’t act quickly to mitigate the spread of the novel coronavirus.

The projection, which was released Friday evening by the Colorado Department of Public Health and Environment (CDPHE) and the Colorado School of Public Health, warned the window to improve transmission control of the virus should happen over the next several weeks, otherwise we would see a stress in critical care capacity across the state.

“Hospitalizations are increasing. Avoiding challenging peaks in infections and hospital demand over the next three months will require a substantial increase in the level of transmission control,” the COVID-19 modeling group said in a summary of their projections, which show that if the state remains on the current trajectory of 67% Transmission Control (TC), we will soon exceed the April peak and will approach ICU hospital capacity.

"Increases in contacts over the holidays will accelerate growth in cases and ICU hospital capacity may be exceeded in December or January," the modeling group warned.

The estimated effective reproductive number, or Re, in Colorado is 1.5 – an increase from the 1.08 Re number the state reported in early September, at a time when the modeling group predicted a surge in cases for October and November.

The modeling group said in its latest projections that given the proportion of susceptible people remaining in the population, TC levels under 78.5% will lead to increasing infections, with a higher percentage of TC levels translating into a flattening or decrease in infections.

The report also reiterated that which has been known for quite some time now – that COVID-19 disproportionately affects people of color more so than whites. The new data showed American Indians and Alaskan natives amounted for more than 25 new weekly cases of the coronavirus per 100,000 people, followed by Hispanics, who reported more than 20 new weekly cases of the new respiratory disease. Whites accounted for about five new cases per 100,000 people.

The new modeling data also provided some projections to ICU capacity, the number of cumulative cases and cumulative deaths if changes occur to the current TC trajectory of 67%, which you can view in the table below.

Estimates from the modeling group also show that approximately 344 people out of every 100,000 residents are currently infectious. That comes to about 1 in every 292 Coloradans. Approximately 8.4% of the state population has been infected to date, the data shows – a 3.4% increase since the last projections were made back in September.

“The magnitude and timing of reductions in transmission will determine the severity of COVID-19 in Colorado in the months ahead,” the modeling group said, concluding, “We are at a critical moment.”