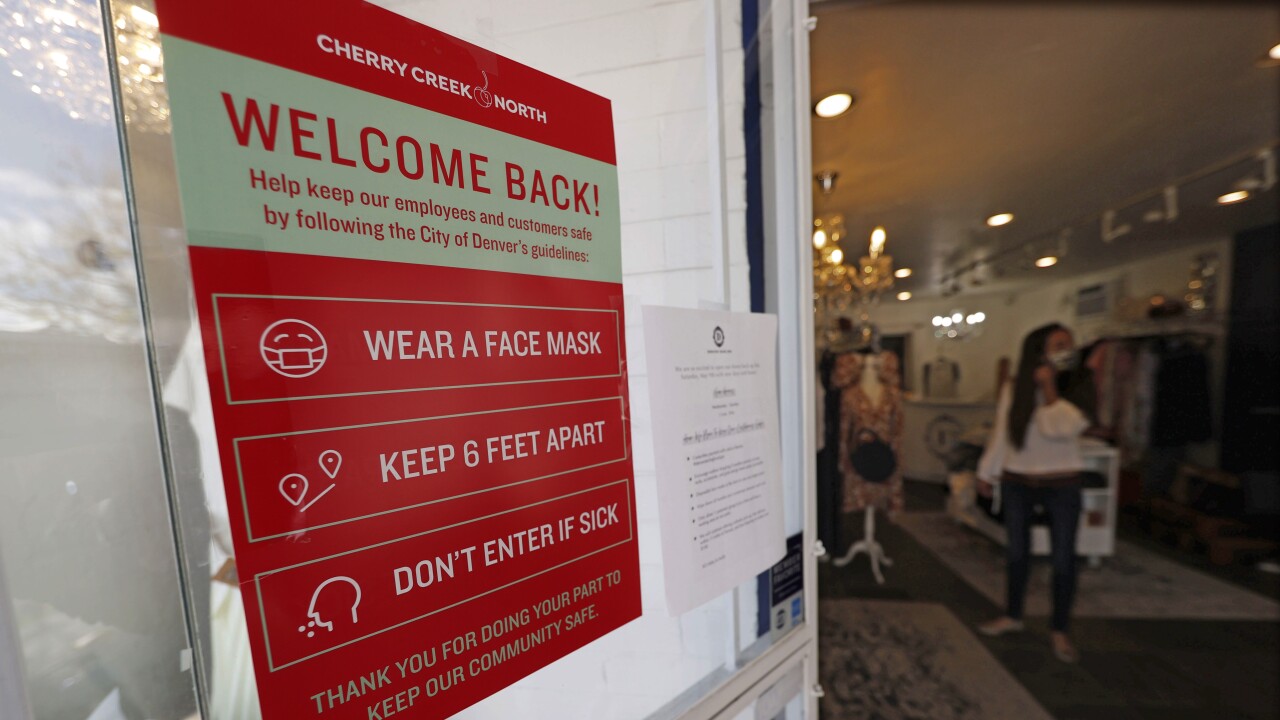 (Copyright 2020 The Associated Press. All rights reserved. This material may not be published, broadcast, rewritten or redistributed.)
David Zalubowski/AP
A placard of rules for customers to follow hangs on the door of a boutique as retail businesses are allowed to open their doors to customers for the first time in almost two months with the expiration of the city's stay-at-home order to check the spread of the new coronavirus Saturday, May 9, 2020, in Denver. (AP Photo/David Zalubowski)

DENVER – Nearly half a million Coloradans filed initial unemployment claims over the past nine weeks, though regular initial claims fillings dropped last week in the state for the fifth week in a row as the full state moved to the safer-at-home phase and many businesses statewide reopened.

The number of regular initial claims fell again week-over-week – down from 22,483 for the week ending May 9.

In total over the past nine weeks, a combined 476,613 initial claims have been filed between the regular and federal unemployment programs – 405,800 of which were regular initial claims, the CDLE said.

Since the week ending April 4, Colorado has paid $521.6 million out of its unemployment insurance trust fund, which Legislative Council Staff and the state are forecasting will be insolvent in June or July.

Another $132.4 in federal money has been paid out to PUA recipients since April 20, and $700 million in Pandemic Unemployment Compensation (PUC) – the $600 a week federal program for people receiving regular or PUA benefits – has been paid out as well.

The industries seeing the most claims and benefits paid for the week ending May 2, from which most recent data are available, continue to be accommodation and food services, retail trade, health care and social service, administrative and support and waste management and remediation services.

The CDLE will release its monthly employment report detailing the April unemployment rate and other details Friday morning. In February, there were about 3.1 million adult Coloradans who were employment-eligible.

Colorado’s unemployment rate rose to 4.5% in March at the onset of the COVID-19 outbreak after stay-at-home orders went into effect statewide in the last week of the month. CDLE officials believe Friday’s release of the April unemployment figure will paint a better picture of how hard the virus outbreak has affected the state’s economy.