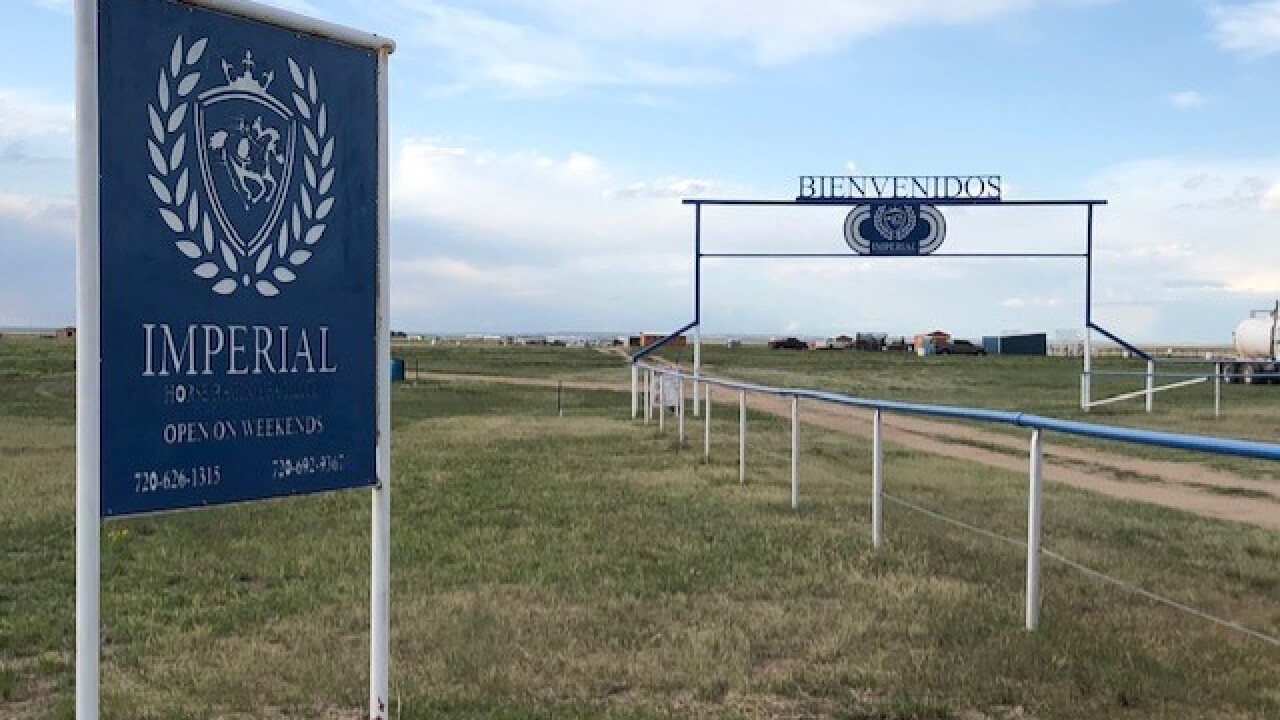 WELD COUNTY, Colo. -- Questions are being raised about a large crowd which gathered Saturday afternoon for a horse race in Weld County.

A woman, out bird watching nearby, noticed a large number of pickup trucks heading up WCR 37 between County Roads 94 and 96.

"I actually got in my car and drove north a little bit," she said, "and noticed hundreds of vehicles parked in a field."

Initially, the woman, who asked that her name not be used, thought a "rogue" rodeo was underway.

"My concern is COVID," she told Denver7. "My understanding of the governor's 'safer-at-home' orders is that there is not supposed to be a gathering of more than ten people, and you're supposed to maintain social distancing. I don't see how this event falls into that category."

The woman videotaped the vehicles with her cell phone. She said the vehicle count was well in excess of 100, possibly 200 or 300.

A woman who said she was the property owner, told Denver7, "This is Imperial Horse Racing Facility. We held an event here today, but we don't do rodeos. There was a horse race here."

When asked if she sought the county's permission to host the race, Ana Ornelas said she did her research with the county commissioners and health department.

"They said that as long as I had hand sanitizer on site, and provided face masks, and just told people to keep their distance of six feet, I was fine," she said, adding, "With 160 acres, there was enough room for people to be apart."

The woman who witnessed the vehicles, said some people who attended may have COVID-19 and not realize it.

The witness said she called the sheriff's office.

"What I was told was that they were not enforcing," she said. "That's a quote."

The Weld County Sheriff's Office initially told Denver7 that the woman who called refused to leave contact information, so they weren't able to follow up, or send a deputy.

Late Sunday evening, Weld County Sheriff Spokesman Joe Moylan said a deputy was being sent to that location to determine what was going on. He said it was an apparent violation of the public health order and that they are encouraging voluntary compliance.

The witness questions why the public health order isn't being enforced.

"I was fairly shocked that the sheriff's office said there was nothing they could do about it, or would do about it," she said. "Are the governor's orders just whether you feel like it or not, or are we supposed to follow those orders in every county in the state, in order to prevent the spread of COVID-19 and keep it manageable?"

Denver 7 reached out to Weld County, to the Colorado Dept. of Agriculture and to the State Health Department.

A Weld County spokeswoman said she was checking with the planning department to see if a permit had been issued, but hadn't heard back.

A spokeswoman at the Dept. of Agriculture said they typically don't get involved unless there are questions about branding, or animal welfare.

We have not heard back from state health department officials.

Editor's Note: The video of this story has been removed.