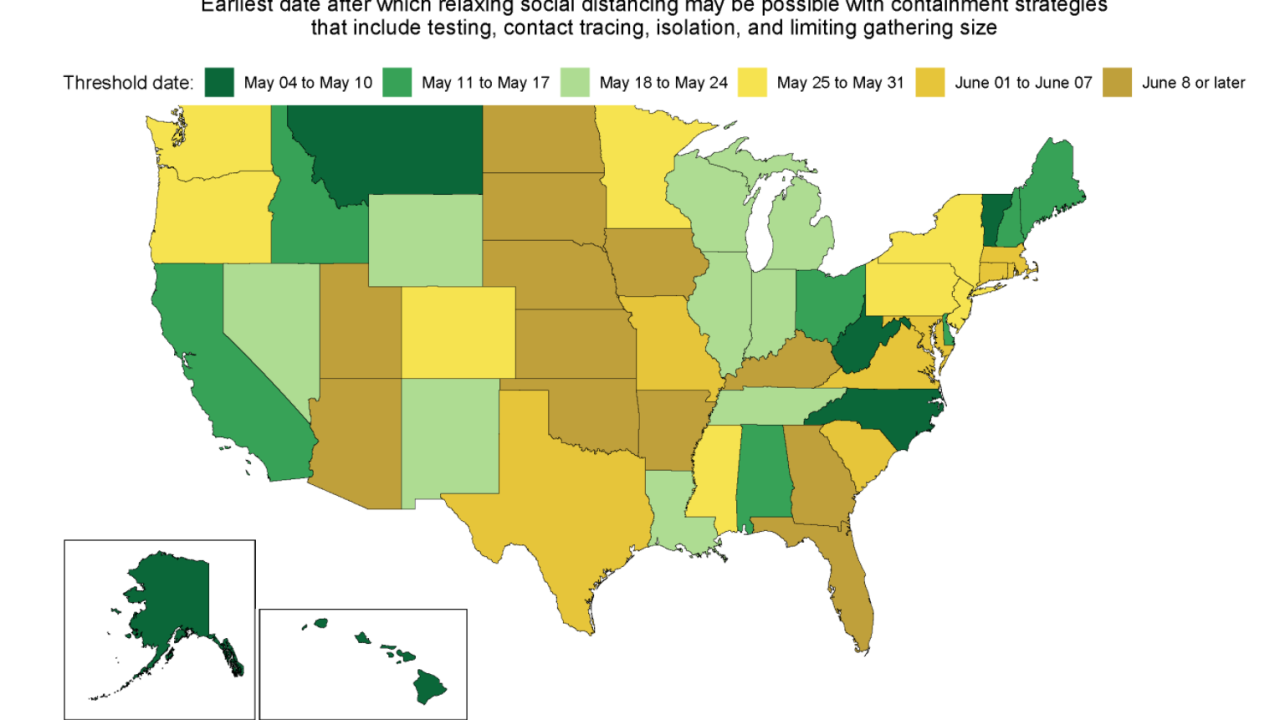 Photo by University of Washington

The University of Washington’s IHME model provided an update late Tuesday on when states should lift so-called “stay-at-home” orders and other intense social distancing guidelines intended to mitigate the spread of COVID-19.

The majority of states should continue intense mitigation efforts past May 15 in 41 of 50 states, and past June 1 in 20 states, the model says.

Only nine states, the model projects, should ease restrictions on or before May 15: Alaska, Hawaii, Idaho, Maine, Montana, North Carolina, Ohio, Vermont and West Virginia.

The IHME’s guidelines call for a threshold of one prevalent case per 1 million residents.

IHME Director Christopher Murray said state governors should be careful not to reopen states too early.

“Relaxing social distancing too soon carries great risks of a resurgence of new infections. No one wants to see this vicious cycle repeating itself,” Murray said.

One state that has drawn particular attention is Georgia, where Gov. Brian Kemp is allowing many businesses where social distancing might be a challenge to reopen on May 1. Businesses such as bowling alleys, dine-in restaurants and movie theaters will be permitted to reopen next week. The IHME model suggests Georgia should wait until June 19 in order to minimize cases there.

But governors have been weighing the economic impact of business closures against the risk of reopening too soon. In the last month, 22 million Americans have filed for unemployment.

There has also been intense political pressure to reopen, especially on governors in red states, as President Donald Trump has pushed governors to lift orders in the wake of sour economic conditions.

But even as Trump has pushed for aspects of the economy to reopen, Trump thinks Kemp moved too far with allowing places such as barbershops and bowling alleys to reopen.

The IHME model update also indicated a slight uptick in the projected death toll from COVID-19 related deaths from around 60,000 to 66,000 through mid-summer in the US. The model had seen a general decline in the estimated number of coronavirus-related deaths in recent weeks.

The IHME model has been cited by members of the White House coronavirus task force and has been used to assist the task force’s recommendations on social distancing.

To see the IHME’s recommendation for your state, click here.