"It's real and it's scary": UCHealth doctor describes COVID-19 effects inside hospitals, on patients 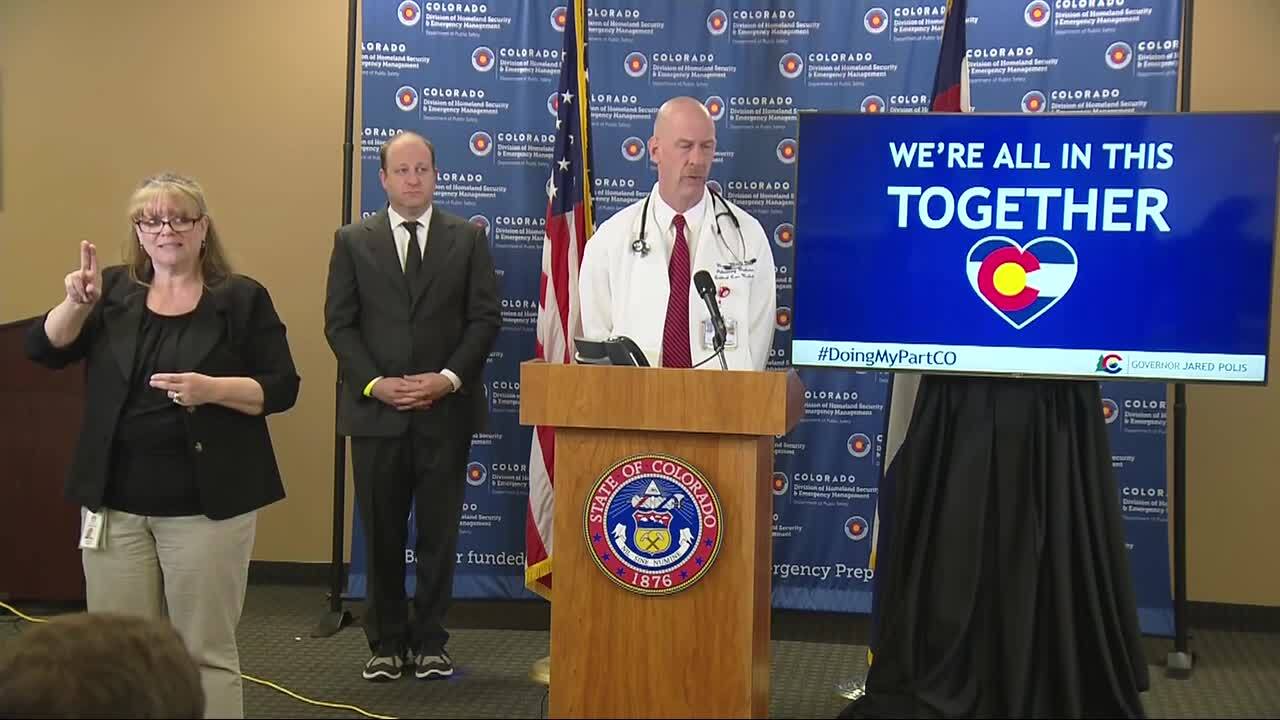 Copyright 2020 Scripps Media, Inc. All rights reserved. This material may not be published, broadcast, rewritten, or redistributed.
Denver7
Marc Moss, MD, who works in internal medicine at UCHealth and is the CU Anschutz Department of Medicine for Clinical Research, spoke alongside Colorado Gov. Jared Polis Monday as both went through the effects of social distancing in the state thus far and described the current state of Colorado hospitals in battling the outbreak. 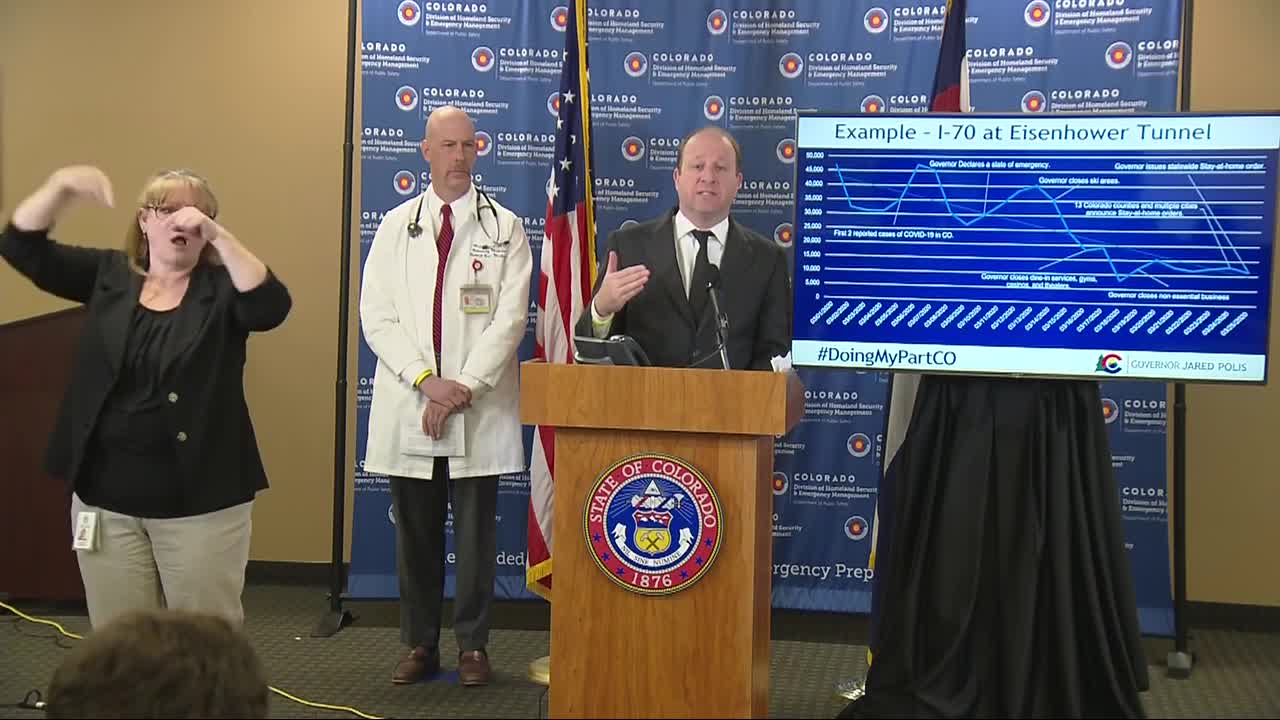 DENVER – People of all ages and all stages of health are susceptible to developing severe versions of COVID-19 and being hospitalized, and Coloradans need to keep up their social distancing efforts to avoid an overload of the state’s health system while more testing and equipment becomes available, an intensive-care unit doctor and pulmonologist at UCHealth University of Colorado Hospital said Monday.

Marc Moss, MD, who works in internal medicine at UCHealth and is the CU Anschutz Department of Medicine Vice Chair for Clinical Research, spoke alongside Colorado Gov. Jared Polis Monday as both went through the effects of social distancing in the state thus far and described the current state of Colorado hospitals in battling the outbreak.

Polis said that there were 2,627 confirmed cases of the virus in Colorado in 47 of the state’s 64 counties. Fifty-one people have died, and 414 people have been hospitalized after 15,364 tests results came back, he said. There are now 14 outbreaks at residential and non-hospital health care facilities, up from 10 on Sunday.

Most of the 414 people hospitalized are still in hospitals, Polis said. Moss said most of the first ICU admissions came last week, and that if those people were lucky enough to survive, they would probably be hospitalized for “a few more weeks.”

Polis called the virus outbreak the “most important public health crisis since the Spanish flu of 1918.”

Both he and Dr. Moss stressed that there are likely thousands more cases in the state, though testing is currently not at the capacity to test all of those people.

Polis said that officials and scientists are using proxy and tracking data to see the effects of the executive orders put in place so far. Monday, Polis said, the data would begin to reflect the effects of the closure of bars and restaurants and limitation of gatherings to 10 people or less. The effects of the stay-at-home order and reduction in in-person workforces won’t be seen until at least next week.

But Polis said that the data seen Monday gave him and other officials hope that the doubling rate of the virus – how long it takes for case numbers to double – had been hopefully spread out to about 5 days, rather than the 1.5-2 it was at earlier this month.

Dr. Moss answered questions abound from many Coloradans, including how the virus is affecting people of various ages and how long it takes for people who develop serious illnesses to recover.

While older Coloradans and people with compromised immune systems are still considered to be most at-risk of contracting the virus and developing more severe illnesses, Moss said that many of the people in the UCHealth ICU at the moment were in their 40s and 50s – some even younger, including one who was 19 years old. Many had no serious underlying health conditions, Moss said.

He said the hospital was caring for an “unprecedented” number of critically ill patients and that twice as many critical care doctors were working around the clock as would normally be the case.

Moss said of the 72 patients at the hospital with COVID-19, 37 were critically ill – and 33 of those 37 people were on ventilators.

“This represents more than doubling the normal number of patients we care for in the medical ICU, and we’re only in the beginning of this crisis.”

He said that the deterioration of some patients happens quickly – going from just needing a little bit of oxygen to needing to be put on ventilators in “a manner of hours.”

He said those people who are hospitalized “are on a long road to recovery.” Many who will require a ventilator will need to survive on those for an average of two weeks, Moss said.

He also said that new COVID-19 patients are coming in to hospitals at rates faster than people are recovering, which was further straining hospital and resource capacities in Colorado.

And he profusely thanked his fellow health care workers, whom he said were “working in a difficult and scary environment and literally putting lives on the line for others.”

He said he had concerns about more health care workers getting sick themselves with the virus as they treat those affected, which would sideline them while they recover and further strain the system.

Moss said it was important to see more testing and to conserve PPE to treat patients who have already truly tested positive for COVID-19 as more PPE is manufactured and more beds come online.

The state’s actions so far in limiting interactions and social distancing were helpful to spreading out the time providers and the state have to respond, Moss said. And while he said that his hospital currently has enough PPE, it will need many more masks, gowns and face shields as the spread of the virus continues.

He urged people to follow the laws regarding staying at home and social distancing, and for anyone who feels symptomatic or sick to isolate themselves and not go to work or elsewhere so they don’t further spread the virus.

“We all need to limit our interactions as much as possible. My colleagues are working as hard as they can to save the lives of your friends, family members, your neighbors – and maybe you,” Moss said. “We can’t risk overwhelming the system. It may seem onerous, but it’s necessary for the time being.”

Moss said he had spoken with other hospitals in the state, as well as doctors in other states, about how to best respond to the virus and to conserve resources while more come online. And he said there were discussions underway about ethical decisions that might need to be made – some of which already are in New York – regarding who gets ventilators and when to make other tough decisions.

“I think what people are trying to do is prepare for the worst and hope for the best,” Moss said. “I’m concerned. I’ve never seen anything else like this in my career. … Nobody wants to go down that road but it’s always good to be prepared.”

Moss said in Colorado, hospitals and the state are modeling out what could happen regarding the infection and hospitalization rates in the state.

Moss said that it was pertinent to start clinical research trials to try to better figure out how to treat patients since there are currently no medical therapies or drugs available to treat COVID-19. Some of the patients develop acute respiratory distress syndrome (ARDS) which also has no known medical treatment aside from ventilators.

And he and Polis cautioned people not to listen to rumors of miracle drugs to treat the virus. Polis said there would be many “dead ends” for everything that’s promising.

“It’s extremely unlikely there will be a silver bullet,” Polis said, saying that better practices would be developed to increase the survivor rate over time.

And while both stressed that 80%-90% of people who develop symptoms won’t require hospitalization and can treat themselves with over-the-counter medication while isolating, Moss made clear that health care professionals were fully committed to battling the virus and trying to help as many people as they could.

“It’s real and it’s scary. We’ve never witnessed something like this in our lifetime,” he said. “We are and will remain relentless in providing the best care to our patients. It’s what we do.”