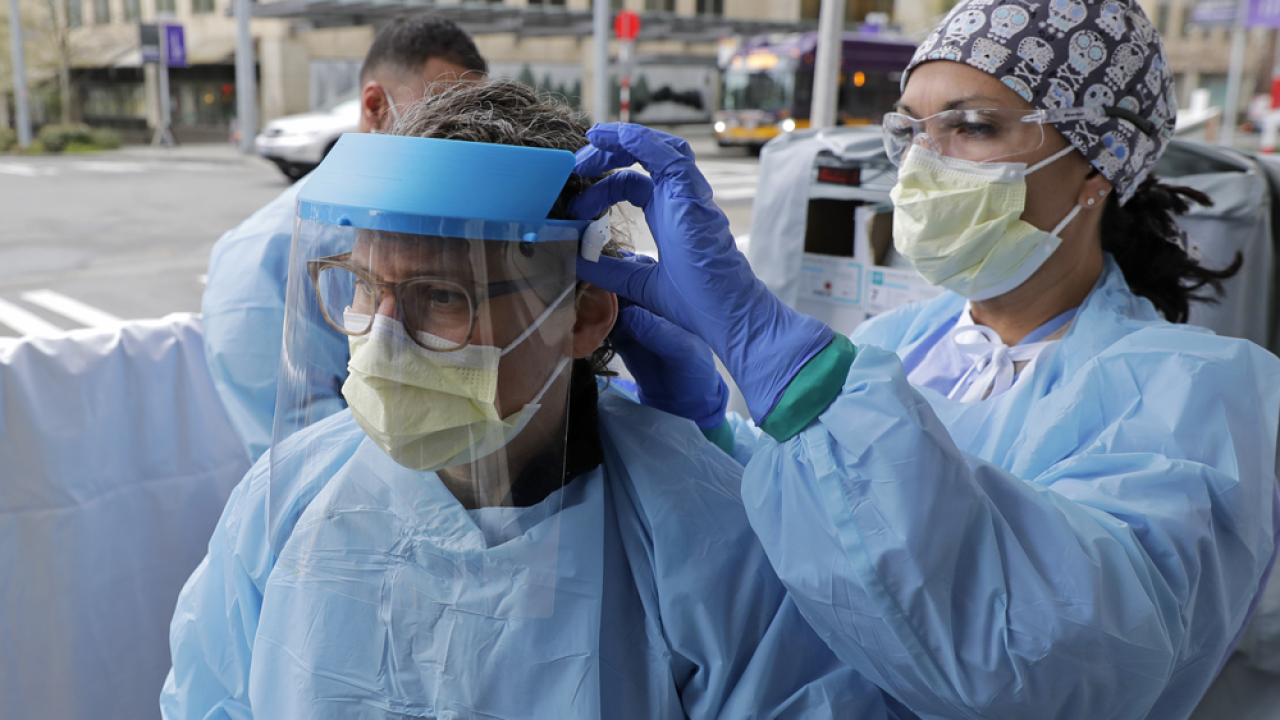 In this April 2, 2020 photo, Tilliesa Banks, right, an emergency services nurse at Harborview Medical Center in Seattle, helps a colleague put on a medical face shield prior to their shift in a triage tent outside the Harborview emergency department used to intake arriving patients who have respiratory symptoms. The face shield was 3-D printed and assembled by a member of a network of volunteers using a design approved and hosted by the U.S. National Institutes of Health. (AP Photo/Ted S. Warren)

Governor Jared Polis and other state governors have accused the federal government of buying PPE’s out from under them.

During a news conference on April 1, Gov. Polis announced that his team had come to an agreement with the Hunan province in China to order masks for the state. However, the governor said he also had to scramble to work with Chinese factory owners and others to find supplies.

The governor even considered sending the state’s 747 over to China with negotiators to try to buy supplies and bring them back.

“I can’t begin to express to you the frustration that I have about our inability to get the masks and supplies that we need into our health care system,” Gov. Polis had said at the time.

But just three days later, Polis said in an interview with CNN that an order for 500 ventilators and other supplies was canceled because the items were bought by FEMA.

“We can’t compete against our own federal government. So, either work with us or don’t do anything at all. But this middle ground, where they’re buying stuff out from under us and not telling us what we’re going to get, that’s really challenging,” Polis said during the CNN interview.

However, FEMA's Administrator, Peter Gaynor, is now denying that claim as well as similar claims from other governors across the country.

“It’s actually an absurd notion that we are taking or seizing PPE. We are buying PPE the way that we always have bought PPE through the federal acquisition process. We put in a bid — we have validated bidders out there to provide the resources we need — and then actually pay for the resources that we need,” Gaynor said.

During a May 1 news conference, the governor announced a change in tactics, saying he was going to keep the order of some PPE and test kits a secret until they were already in the state to avoid having the order taken by the federal government.

Others are taking a more sever stance. In Maryland, the governor said he deployed the National Guard and state police to protect COVID-19 test kits he had purchased from South Korea during an interview with the Washington Post.

Gaynor said he believes what is really happening is that those negotiating the contracts are trying to take advantage of the pandemic.

“I think there's a middleman out there trying to drive up prices for their own benefit and take advantage of customers, whether in nursing homes or in states, for their own private good and the use FEMA as a scapegoat,” Gaynor said.

Gaynor said FEMA is working with the Department of Justice to try to identify and stop these bad actors from taking advantage of potential buyers and encouraged anyone who was told FEMA diverted their contract to contact them with information so the DOJ can investigate.

During a news conference Friday, Polis welcomed the investigation.

“I would be thrilled if the DOJ is looking at federal interdiction of state purchasing efforts. We’ve had to compete against all kinds of buyers for masks, for tests. We competed against other states, we competed against our own federal government, we compete against foreign governments,” Gov. Polis said. “I would welcome any investigation (by the) DOJ into any potential malfeasance.”

The governor went on to say that he wishes there was a better national strategy from the start and collaboration between the states and federal government to coordinate supply purchases.

The governor met with President Trump earlier this week to talk about the state’s response to the COVID-19 pandemic and ask for more testing supplies.

Behind the President and governor in the meeting were signs showing the number of medical supplies Colorado has gotten. However, in a news conference afterward, Polis pointed out that in small print below the numbers it specified that those numbers included supplies given to the state by the federal government as well as Colorado’s individual purchases.

After the meeting, Gov. Polis told Denver7’s reporter that the President reiterated his commitment to get more Colorado more tests.

For now, Colorado is still working to acquire medical equipment and tests on its own in secret while welcoming federal support.