Copyright 2020 Scripps Media, Inc. All rights reserved. This material may not be published, broadcast, rewritten, or redistributed.
Denver7
Six Republican state lawmakers from Douglas County called for county commissioners to terminate the county’s relationship with the Tri-County Health Department after it issued a stay-at-home order Wednesday morning. 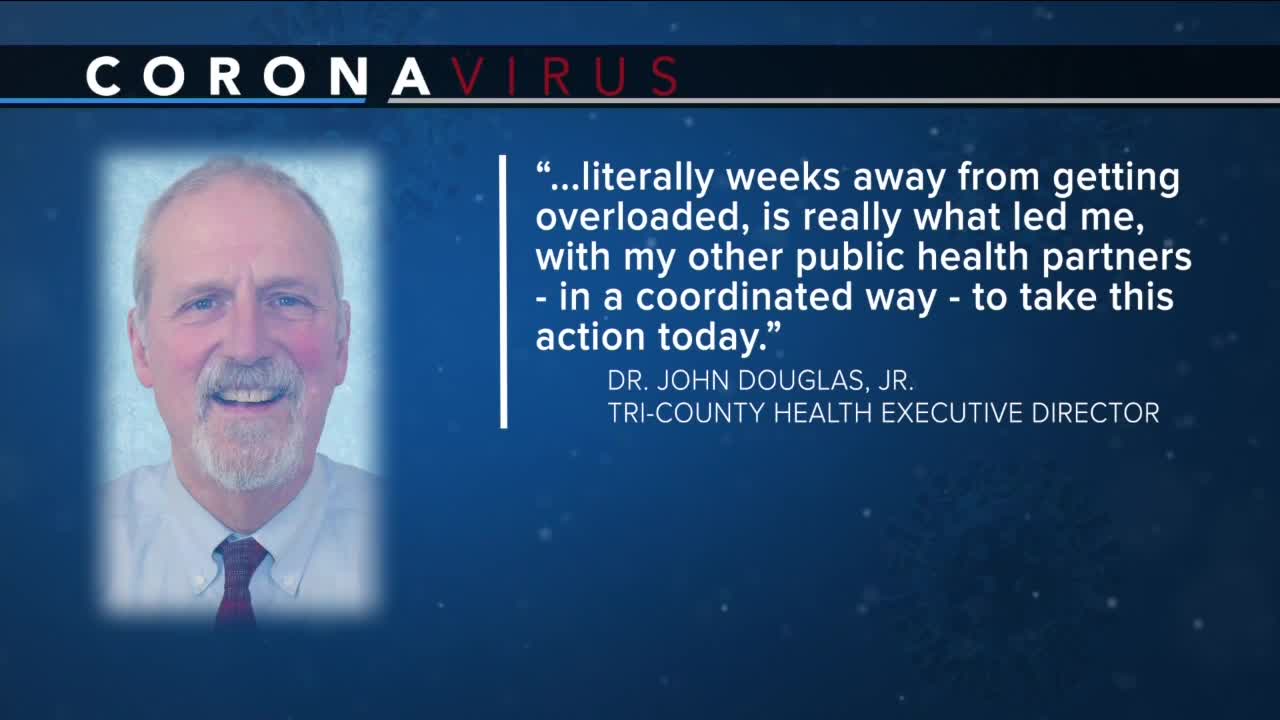 DENVER – Six Republican state lawmakers from Douglas County – including the House and Senate minority leaders and a senator who has COVID-19 and is quarantined at his second home in California – called for county commissioners to terminate the county’s relationship with the Tri-County Health Department after it issued a stay-at-home order Wednesday morning.

On Wednesday morning, Tri-County Health, which covers Arapahoe, Adams and Douglas Counties, along with the health departments for Boulder, Broomfield and Jefferson counties, issued stay-at-home orders that will go into effect Thursday at 8 a.m. and remain in effect through April 17. The lawmakers said they felt the order was "heavy-handed" and should not have come from the health department, though it has the authority to issue such an order.

Dr. John M. Douglas, Jr., the executive director of Tri-County Health, said in a briefing that the move was necessary after Denver’s and Boulder’s stay-at-home orders went into effect Wednesday and so the metro area can work to mitigate the spread of the novel coronavirus outbreak so it doesn’t overstress the metro-area’s hospital systems. He said he believes a statewide order should be issued, but Gov. Jared Polis has so far resisted doing so.

Dr. Douglas said the area was “badly lacking” PPE and needed to make time for hospitals to ramp up their supplies and capacities before the peak numbers of the virus hits the metro area and with testing capabilities still extremely limited. He said that Tri-County had the authority to issue the stay-at-home order as a public health order under the 2008 Public Health Act to stem the pandemic during the public health emergency. He also made clear that the order was a stay-at-home order and not a “shelter in place” order as the lawmakers claim, which the county reaffirmed later Wednesday.

At least 11 people have already died of COVID-19 in Colorado and there are at least 912 cases and 84 people hospitalized statewide, according to data released Wednesday afternoon by the state – though medical professionals and the Colorado Department of Public Health and Environment believe there are many, many more cases.

Douglas County already has at least 53 confirmed cases. Arapahoe County has 69; Adams has 27 and Denver has 176 confirmed cases, according to the CDPHE data.

But the top two Republican lawmakers in the state – Senate Minority Leader Chris Holbert, R-Parker, and House Minority Leader Patrick Neville, R-Castle Rock – along with fellow Douglas County Republicans Sen. Jim Smallwood, Rep. Kevin Van Winkle, Rep. Kim Ransom and Rep. Mark Baisley, wrote to the three Douglas County commissioners after the order was made to tell them they should terminate the county’s relationship with the health department.

“It has come to our attention that Tri-County Health has issued a ‘shelter in place’ order, which includes Douglas County. As a result of that order, we urge you to terminate whatever contract exists between Douglas County and that organization,” the lawmakers wrote.

“It is our understanding that at least two of you opposed this heavy-handed application of governmental power. To those who did oppose the action, thank you standing for the constitution and with the majority of your constituents here in Douglas County. We consider it unacceptable that a contracted health agency could somehow ignore the will of a majority of our elected and accountable Douglas County Commissioners,” they added.

The lawmakers also said the commissioners should consider creating a new health agency “that might align with the pending new Judicial District” or to work with El Paso County Health.

Smallwood already is under quarantine at his second home in Carlsbad, Calif., after he tested positive for the virus and plans to remain quarantined there until March 31.

In a statement Monday, he said that his situation showed “just how valuable social distancing is in this difficult time, as despite my best efforts to follow the advice of medical professionals, I still contracted COVID-19 from an unknown source.”

“Stay safe, everybody,” he added.

“Unelected bureaucrats should not have the unilateral authority to simply decide to enact policy that would imprison citizens for 18 months and fine them 5,000,” Neville tweeted, though officials have not said how strictly they would enforce penalties and if they would impose maximum penalties, which is what Neville referred to. “This is outrageous and will only lead to less social distancing as people panic buy.”

Tri-County Health said in a statement they were consulting with commissioners and the board of health, both of whom Denver7 has contacted for a response as well.

“At this point, we would have no response to the letter until we hear from the Board of County Commissioners and the Board of Health,” Tri-County said in a statement.

The county reaffirmed the Tri-County Health Department order and reasserted that it was a stay-at-home order and not a "shelter in place" order, as the lawmakers claimed.

“It will not surprise you to hear that our Board’s focus today is primarily on 1) the stay-at-home order helping our community and our business community have clarity (see attached); and 2) our Douglas County initiatives focused on Human Needs and Economic Recovery. Perhaps one reason the delegation is alarmed is that they refer to this as a “shelter in place” order. It is not a “shelter in place” order. There is a big difference. Attached is our understanding of what Tri-County Health Stay at Home order says,” said Wendy Holmes, a spokesperson for the county and county board of commissioners, in a statement.

"These rules and laws need to be complied with, but the fear should not be that you will be drug into court to face criminal charges. That is a matter of last, last, last resort," he said in a statement.

Douglas County Sheriff's Office Tony Spurlock also weighed on the health order, saying he's been working for weeks "to make sure the voice of our community and as well as the needs of local enforcement have been heard."

'While this order, as well as the State’s order have come from those who’s duty is to protect the health of our community, it did not come without much input and many suggestions from law enforcement representatives.

"I am authorized to enforce this order but am optimistic that enforcement will not be necessary, and that if there are instances where complaints are received, that education will be all that is needed to obtain cooperation. It is NOT my intent to look for groups of people or stop people driving from home to other locations. We will respond to complaints but understand that we will evaluate each complaint individually and address the citizens with the utmost of discretion and education in mind."

Polis indirectly referenced the lawmakers’ letter at a news conference later Wednesday at which he announced a statewide stay-at-home order effective at 6 a.m. Thursday until April 11, saying the virus does not care what one’s political persuasion or party is and that it will spread nonetheless without further action.