Crow says though DPA has been invoked, it's not been widely used so far 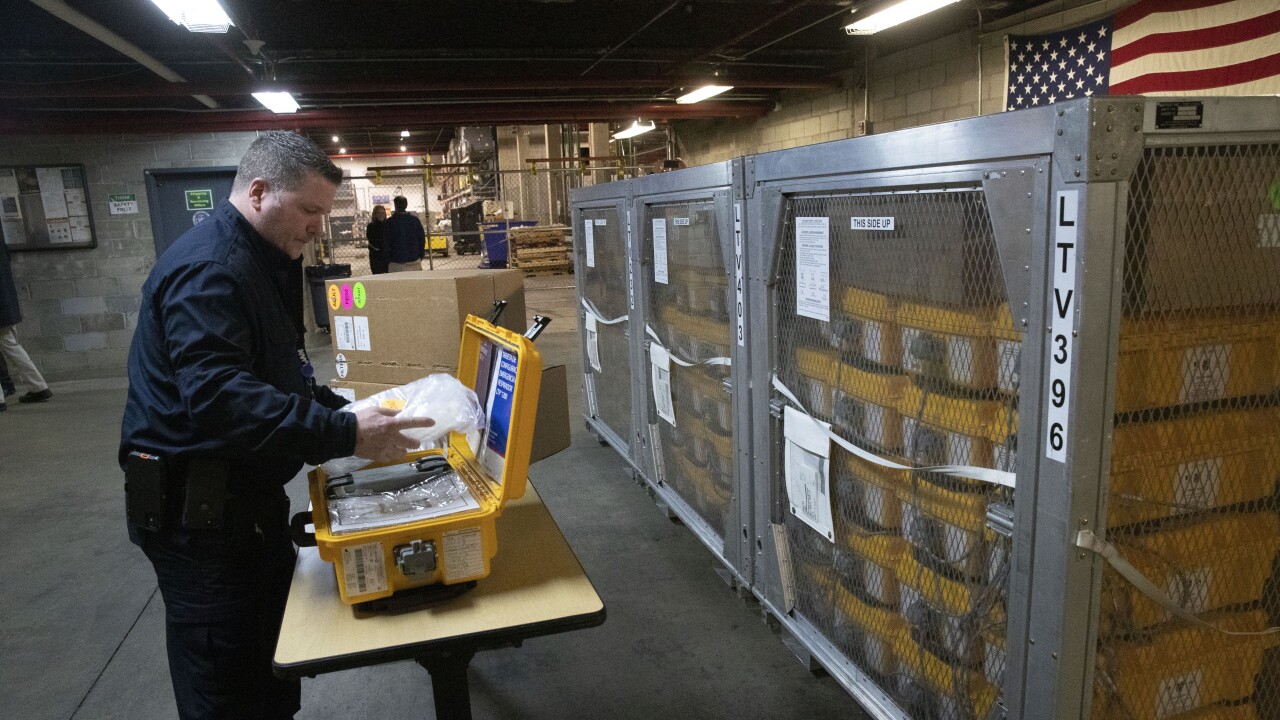 (Copyright 2020 The Associated Press. All rights reserved. This material may not be published, broadcast, rewritten or redistributed.)
Mark Lennihan/AP
Vincent Dellova, a coordinator at the New York City Emergency Management Warehouse, packs up a ventilator, part of a shipment of 400, that arrived Tuesday, March 24, 2020 in New York. (AP Photo/Mark Lennihan)

DENVER – Congressman Jason Crow and California Rep. Katie Porter, along with other lawmakers, on Thursday introduced a new measure that, if enacted, would force President Trump to use the Defense Production Act to start buying and having manufacturers produce personal protective equipment (PPE) to fight the novel coronavirus (COVID-19).

Though President Trump invoked the DPA earlier this month, but tweeted Tuesday that the U.S. hasn’t had to use it yet. The law, enacted in 1950 in response to American needs for more war supplies after the Korean War, allows the president to order the ramp-up of supplies to protect the health and safety of Americans, among other things.

Some private companies have already started producing necessary PPE in response to the outbreak on their own without being forced by the DPA.

Health care workers and officials in Colorado – and around the country – have said they are currently facing critical shortages of PPE and ventilators as they try to stave off large peaks of cases in the virus that they worry could overwhelm state hospital systems and put much of the health care workforce out of work because they too are sick.

The Federal Emergency Management Agency (FEMA) said Tuesday it would not need to use the DPA to get the necessary medical equipment and the agency’s administrator said earlier in the day that the president would use the act to obtain more of those supplies.

The measure introduced by Crow and Porter – whose sister, who is a doctor, went viral in a video explaining the curve of the virus last weekend – would require the federal government to buy 300 million N95 respirator masks within 24 hours of the bill being enacted, according to the members.

It would also direct the administration to identify manufacturers and industries that are most-ready to immediately fill orders and work to find private or government stockpiles of PPE that could be repaired and used.

The bill would also waive dollar limits for orders and a 30-day waiting period for larger orders currently in place under the DPA, Crow’s office said.

Under the measure, if passed, FEMA, the VA and Health and Human Services would be required to provide a report within a week of the measure’s implementation, and it would require the administration to use that data to buy additional equipment.

“Our healthcare workers in Colorado and across the country are our nation’s soldiers on the frontline in the fight against the coronavirus pandemic. Their work is paramount to protecting the health and safety of Americans but as we speak, they face crippling shortages that threaten their health and our national security as we combat this virus,” Crow said in a statement. “The Administration must invoke the Defense Powers Act and mobilize the creation of masks and other urgently needed medical equipment. I’m proud to lead on this bill to save lives and get our health care workers the supplies they need, we owe our soldiers in this fight nothing less.”

“Testing. Masks. Ventilators. We need more of them and now. The President must invoke the Defense Production Act to immediately mass produce and coordinate distribution of these vital supplies for the sake of Colorado families, hospitals and our public safety,” Neguse said in a tweet.

There are several other similar efforts underway in both chambers, including bills in the House and Senate – which Neguse is also cosponsoring – to force the president to federalize manufacturing and distribution of PPE. And the calls for its usage have come from both parties.

Colorado will receive 7,500 tests for the novel coronavirus (COVID-19) this week and next week specifically to test health care workers and first responders in the state, the director of the state emergency operations center said Thursday.

Colorado Emergency Operations Center Director Mike Willis said Colorado received the initial 5,000 tests this week and is hopeful it will receive the remaining 2,500 tests next week through a HHS program.

The state has implemented an innovation response team to try to work with the private sector to ramp up PPE manufacturing and buying in Colorado, as well as testing capabilities, while it awaits more federal help.

The Colorado Department of Health and Environment’s incident commander for the state’s COVID-19 response said Thursday the state does not currently have a true estimate of how many times more cases there are in Colorado compared to the number of lab-confirmed cases.

“We all do believe there are certainly several thousand more than we have reported at this time,” he added.

The chief of emergency medicine at the UCHealth University of Colorado Hospital in Aurora told Denver7 earlier this week that the metro area was only days away from running out of PPE. The materials delivered to Colorado so far from the National Strategic Stockpile have been welcomed by officials, but say they are inadequate at the moment to fill the state’s needs – thus the work with private partners by the innovation response team.