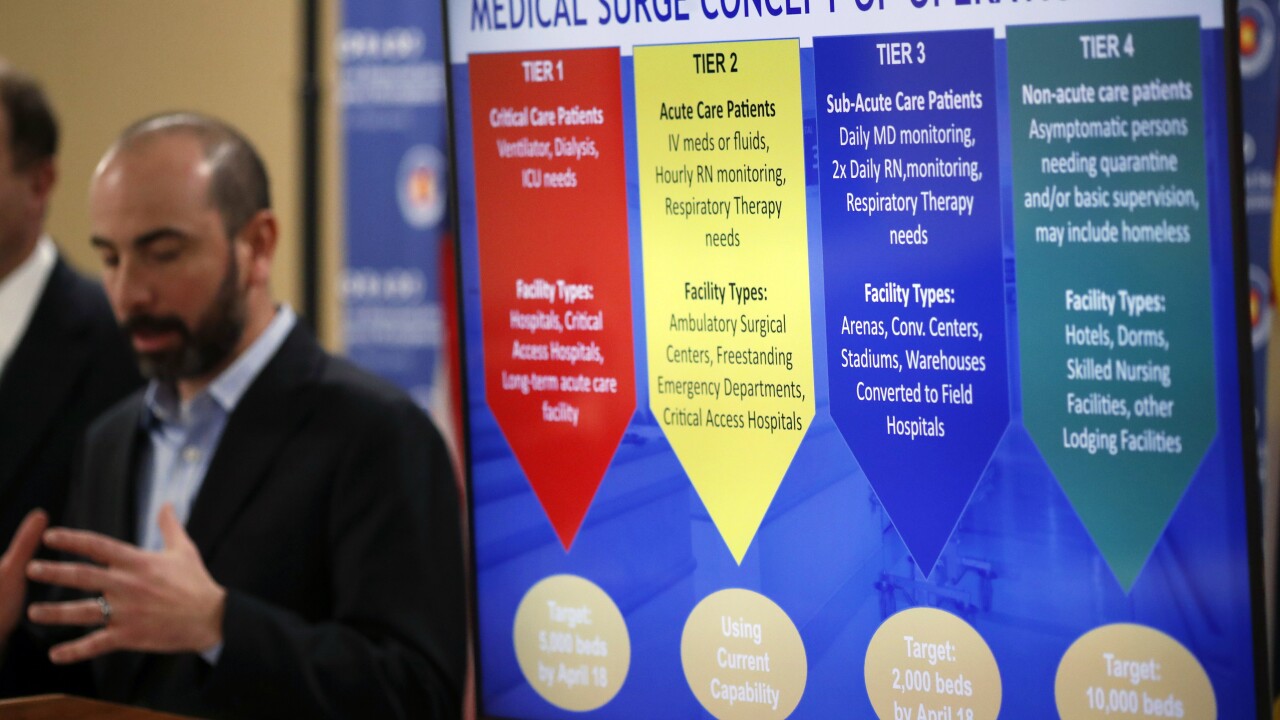 (Copyright 2020 The Associated Press. All rights reserved. This material may not be published, broadcast, rewritten or redistributed.)
David Zalubowski/AP
A slide is shown to illustrate Colorado's medical needs to deal with a surge of coronavirus patients expected in the months ahead as Scott Bookman, the state's incident commander for the COVID-19 response, considers a question during a news conference as a statewide stay-at-home order remains in effect during the virus outbreak, Wednesday, April 1, 2020, in Centennial, Colo. The new coronavirus causes mild or moderate symptoms for most people, but for some, especially older adults and people with existing health problems, it can cause more severe illness or death. (AP Photo/David Zalubowski)

DENVER – Colorado’s COVID-19 incident commander said Thursday that top public health officials believe that the social and physical distancing measures taken by the state, as well as the statewide stay-at-home order, have pushed the peak of the novel coronavirus here to May and bought more time to get more medical supplies and facilities in place.

Scott Bookman, the incident commander for the state, and Emergency Operations Center Director Mike Willis said that officials were encouraged by the latest modeling data showing the peak had been pushed back.

The two, as well as Gov. Jared Polis, have said on several occasions this week that the latest data was beginning to show the effects of the stricter social distancing measures taken in early and mid-March and that the coming days and weeks would begin to show how the statewide stay-at-home order was affecting community spread from COVID-19 in Colorado.

Bookman and other public health officials said earlier this week they were “certain” the peak of the virus had yet to hit Colorado and that estimates show there are likely more than 17,000 people who have contracted the virus here so far, though there were only 6,202 cases that had been laboratory-confirmed as of Thursday afternoon.

Bookman said there are still challenges surrounding testing because of a lack of available PPE, viral transport equipment and sterile swabs but that there was an “enormous amount of testing capacity” as more private labs have come online. Willis said that the state had already obligated around $50 million toward getting more medical equipment and PPE, much of which would be reimbursable through the Stafford Act, FEMA and CDC grants, he said.

Once those testing items become more widely available, officials hope to do more broad-based testing, contact tracing and isolation to better track people who are positive with the virus and to contain the spread from those people as officials work to gradually lift the distancing orders.

Bookman said April 1, as he and the governor announced a tiered treatment system, that the state’s goal was to have 5,000 ICU beds and 2,000 “Tier 3” beds for patients who only need occasional monitoring in place by April 18, and to have 10,000 “Tier 4” beds for people with mild symptoms by May 15 in order to avoid a system overload.

Willis said Thursday that the 100 ventilators promised to Colorado by President Donald Trump on Wednesday would be inventoried within the next 24 hours.

On Thursday, Rep. Joe Neguse, D-Colo., led a letter along with other Democrats who are part of Colorado’s congressional delegation to Vice President Mike Pence calling for more transparency in the FEMA supply chain process so the state can get the supplies it needs to try to stave off the system overload when the peak occurs.

“We appreciate FEMA’s recent award of $16.7 million to the state of Colorado for the purposes of purchasing critical supplies. However, more needs to be done to facilitate strong coordination between FEMA and state governments to ensure these funds are used effectively,” the letter said. “We understand that our current circumstances are extraordinary. They demand a commitment to addressing local needs more rapidly than ever before. Put simply, lives depend on it. As we continue to battle this pandemic, our success relies on strong communication and transparency between all levels of government.”