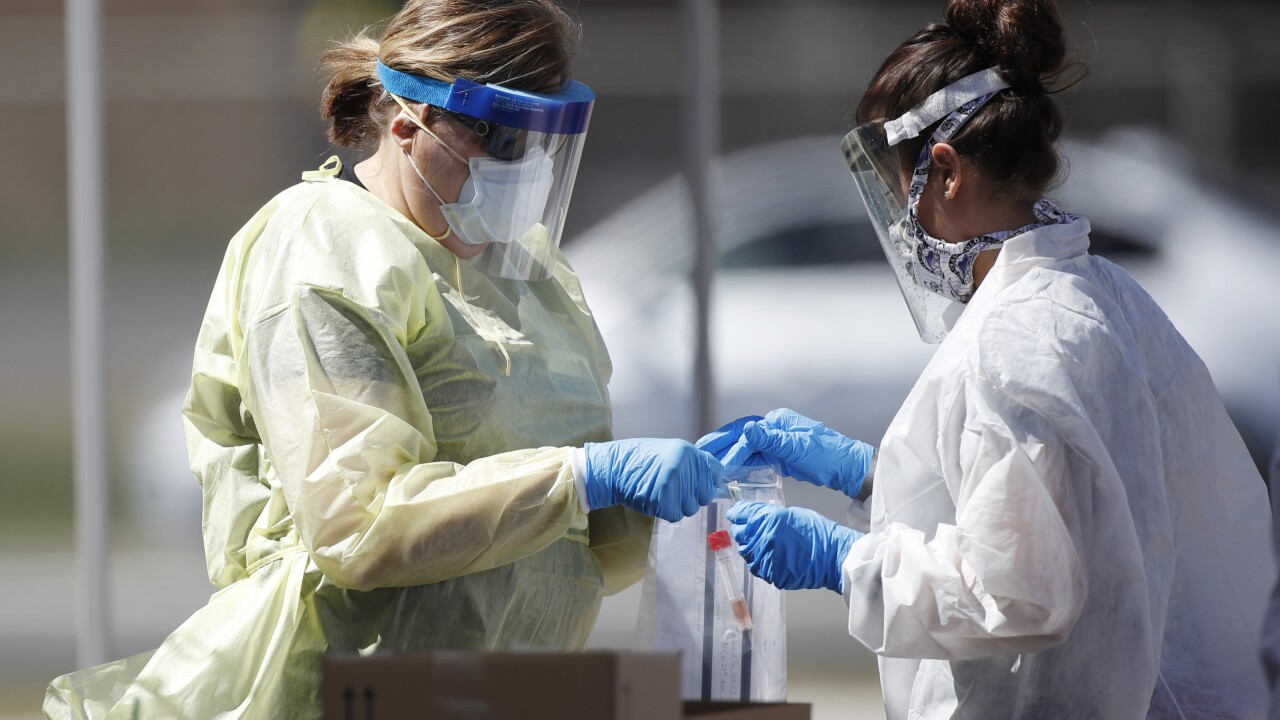 (Copyright 2020 The Associated Press. All rights reserved. This material may not be published, broadcast, rewritten or redistributed.)
David Zalubowski/AP
A medical technician drops a vial containing a swab into an envelope held by another technician at a Stride Community Health Center drive-thru testing site as a statewide stay-at-home order remains in effect in an effort to reduce the spread of the new coronavirus Tuesday, March 31, 2020, in Wheat Ridge, Colo. The new coronavirus causes mild or moderate symptoms for most people, but for some, especially older adults and people with existing health problems, it can cause more severe illness or death. (AP Photo/David Zalubowski)

DENVER – Colorado’s death count from COVID-19 is expected to jump by about 130 this week as the state health department begins to add older and “probable” deaths from the virus to the count, public health officials said Wednesday evening.

As of Wednesday, the Colorado Department of Public Health and Environment had recorded 508 confirmed deaths from the novel coronavirus, the state reported.

But the CDPHE said it will start including death data by the date of a person’s death if that can be confirmed.

CDPHE epidemiologists started reviewing cause of death information on people’s death certificates and reporting deaths into the state database that had not been previously reported, the department said.

That will include adding the “probable” deaths from COVID-19. The department said a death will be classified as “probable” if the person who died was a resident of Colorado who had no known positive lab tests for the coronavirus but still has their cause of death listed as COVID-19 or equivalent on their death certificate.

The state says it generally receives death certificate information within three days of a person’s death. Health care providers, coroners and local public health agencies are all directed to report directly to the state’s epidemiology and surveillance team.

The state said that it anticipated those new entries from this week to raise the number of COVID-19-related deaths by 130 this week. Deaths are generally a lagging data point since it takes days typically for the deaths to be classified and reported.

“This is not because those individuals died this week, but because their deaths have now been recorded in the state system,” the CDPHE said in a news release.

The CDPHE issued a public health order on guidance to hospitals on what information to provide to the state.

The department said that in addition to the increased deaths, people should also expect to see an increase in case numbers because of targeted testing in communities or at facilities, as well as a decrease in county-level case counts because Colorado has started to remove out-of-state cases from its data.

The state’s hospital data dashboard will also start to display information on the number of ventilators currently in use and available at hospitals across the state, as well as the number of patients under investigation for the virus who are suspected of having it but have not had a lab-confirmed test performed.