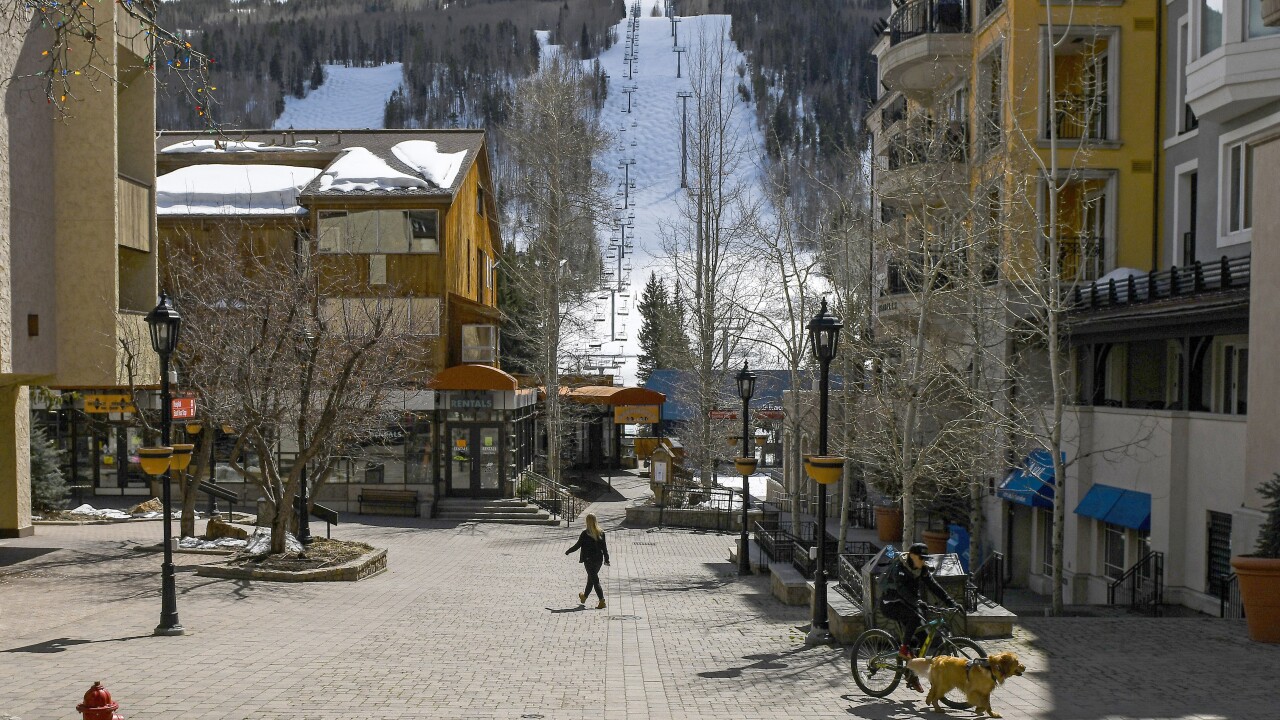 (Copyright 2020 The Associated Press. All rights reserved. This material may not be published, broadcast, rewritten or redistributed.)
Michael Ciaglo/AP
This Tuesday, March 24, 2020 photo shows people walking through empty streets at the base of Vail Ski Resort after the resort closed for the season amid the COVID-19 pandemic, in Vail, Colo. Ski resorts across the West that were shut down amid coronavirus fears are grappling with an economic blow at a time they would normally be welcoming hordes of spring break revelers. (AP Photo/Michael Ciaglo)

Colorado had more than 19,000 unemployment claims last week, a 737% increase from the previous week, as businesses laid off workers amid the widespread economic shutdown because of the coronavirus, the U.S. Labor Department said Thursday.

“As a former business owner, I know that this will be devastating news to workers and small business owners across our state. But the economic impact of the COVID-19 crisis will be longer and more severe if we don’t do everything we can to slow the spread of the virus,” Polis said in an emailed message to Colorado residents after he issued the statewide order late Wednesday.

As bad as Colorado’s new unemployment figures may turn out to be, they probably do not fully capture the scope of those out of work because the state is struggling to accommodate demand for unemployment insurance claims.

The surge in claims temporarily jammed the application webpage at the Colorado Department of Labor and Employment this week. The department is now asking claim seekers to apply on different days of the week depending on the first letter of their last name to prevent the site from being overwhelmed.

A Colorado Chamber of Commerce survey of its members made public this week suggested that nearly a quarter of firms with 50 or fewer workers fear going out of business if the economic crisis persists. An estimated 80% of firms with 250 to 1,000 workers reported being concerned about being forced to temporarily close their operations.

And a March 16 economic forecast issued by the governor’s budget office said that there might be an increasing risk of recession triggered by extended business closures despite the fact that the state’s economic was expanding before the pandemic hit.

Anticipating mass layoffs, Polis, a Democrat, has encouraged small firms to apply for low-interest emergency loans of up to $2 million from the U.S. Small Business Administration. He directed state agencies to expedite unemployment claims and to guarantee state-funded temporary paid sick leave for all Colorado workers. The sick leave is an incentive for workers to go home if they get sick without fearing for their jobs and infecting co-workers. It allows them to recover at home and more quickly return to the workforce.

Colorado’s unemployment rate in January was 2.5%, according to the latest monthly data from the state labor department. Total employment was more than 3.1 million for that month in the state of nearly 5.8 million people.

For most people, the coronavirus causes mild or moderate symptoms, such as fever and cough that clear up in two to three weeks. For some, especially older adults and people with existing health problems, it can cause more severe illness, including pneumonia and death. The vast majority of people recover.

More than 1,430 people in Colorado have tested positive and at least 24 have died.

— Mesa Verde National Park joined other national parks in closing because of the outbreak. The decision announced Wednesday night was made in response to guidance from local health officials.

— State oil and gas regulators decided Wednesday to temporarily stop work on new rules mandated by state lawmakers to prioritize protecting public health, safety, the environment and wildlife. Regulators decided the rules were too important to be developed in virtual meetings, The Daily Sentinel reported. The Colorado Oil and Gas Conservation Commission said it would continue issuing new drilling permits.