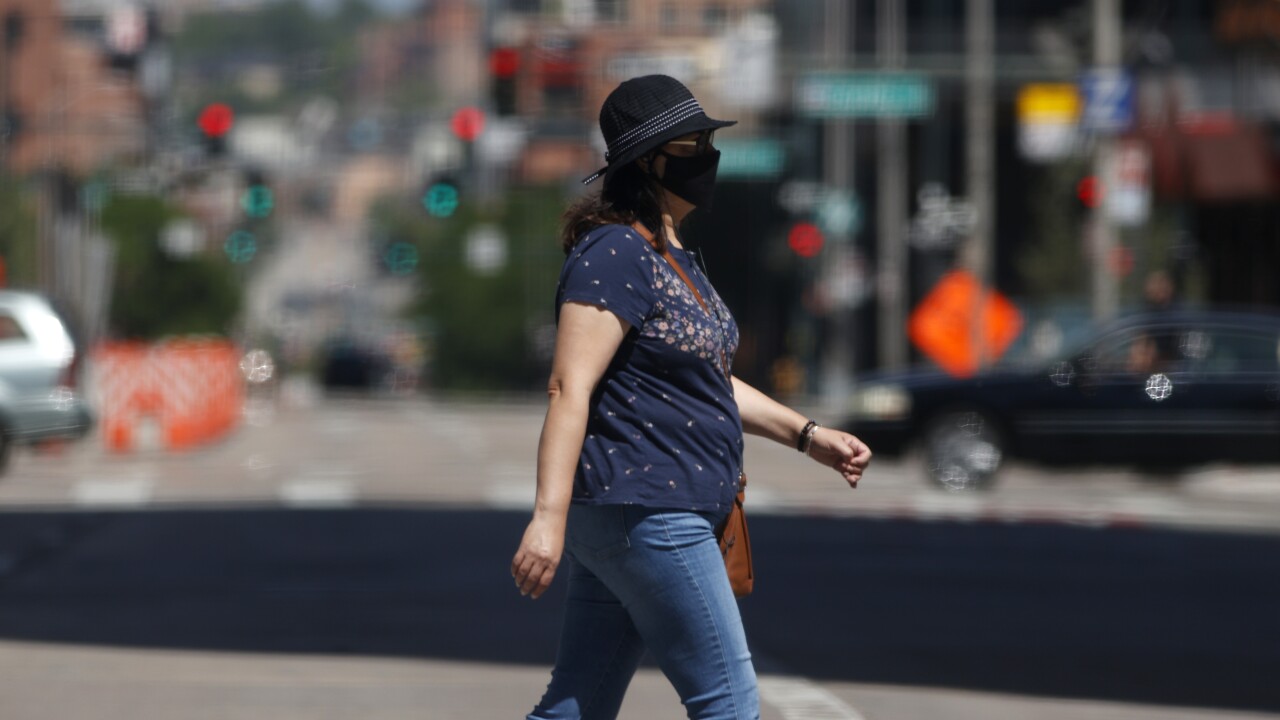 (Copyright 2020 The Associated Press. All rights reserved. This material may not be published, broadcast, rewritten or redistributed.)
David Zalubowski/AP
A pedestrian wears a face mask while crossing 15th Street at Curtis Street, Tuesday, June 23, 2020, in downtown Denver. (AP Photo/David Zalubowski)

DENVER – Colorado’s state epidemiologist said Wednesday that health officials saw an increase in novel coronavirus cases last week over the week before, when they reached their lowest levels in months, and state officials said they are watching trends and being cautious as the U.S. heads into the Fourth of July holiday.

Colorado Department of Public Health and Environment State Epidemiologist Dr. Rachel Herlihy and Gov. Jared Polis, as well as Denver’s mayor and public health department executive director, on Wednesday discussed recent surges of COVID-19 cases in most of the states that neighbor Colorado, and where trend lines sit as of Wednesday in the Centennial State. Both had said last week they were cautiously watching data in the state.

“Right now, the trend is good in our state,” Polis said. “There’s a slight uptick. We’re watching it closely.”

Herlihy said that while Colorado has “made tremendous progress” in its fight against the virus since case, hospitalization and death numbers peaked in mid-to-late April, they were still waiting to see if data from this week will continue to show an increase in cases here.

She said that the week of June 7 brought the lowest case, hospitalization and deaths numbers that Colorado has seen since the outbreak began here. But the week of June 14 saw an increase in case numbers and positivity data.

Herlihy said that Coloradans were successful in bringing the virus’ reproductive value below 1 during the stay-at-home and safer-at-home phases, but that last week’s case number increase showed that the reproductive value was creeping up back toward 1, and was at 0.96 after last week.

That means that for every person who has the coronavirus, they will spread it to roughly 0.96 other people based on distancing levels, interaction and other factors.

Herlihy said that the “time is critical” to ensure that Coloradans are keeping up mask-wearing, social distancing and other measures in order to keep the one-week increase from becoming a multi-week trend, and the virus from growing exponentially once again as it did in March and early April in Colorado. Herlihy also said that it was critical for local public health agencies to have the capacity to test, isolate, quarantine and trace cases before outbreaks get any larger.

Polis said that officials are still not sure the cause of the recent uptick in cases, but that he believed many of the cases came from larger gatherings. He said the state did not currently have data linking the protests in Colorado to the uptick in cases.

The average age of people positive for COVID-19 in Colorado has also continued to drop in recent weeks, which Herlihy said was “a good thing,” saying that older Coloradans are staying at home when possible, as they have been instructed, and that younger populations have less severe outcomes from the virus than older Coloradans.

She said that on average, about 40% of people all ages could be asymptomatic and still contagious with the virus, but that number could be over 50% for younger age groups. She said that it was “critically important” for younger Coloradans to keep that in mind, as outbreaks have been seen in Boulder and Eagle counties involving young people having large gatherings.

Herlihy said that Coloradans should continue to follow the “safer at home and in the great outdoors” framework and safety rules that have been in place for weeks in order to keep Colorado from seeing the spikes seen in neighboring states like Arizona and Utah.

Polis and the other officials said they believed that the spikes in other states stemmed from Memorial Day get-togethers, and he urged people not to gather in large groups or with people outside their families to celebrate the Fourth of July in coming days, saying that doing so could lead to a spike in Colorado.

“All of our gains could be reversed very quickly if we’re not careful,” Polis said. “My best advice as you’re interacting with other people is just to act as if everybody might have coronavirus and be contagious.”

He said that local communities should follow Eagle County’s lead in requiring people who come to visit either from other parts of the state or from out-of-state to provide guests with detailed instructions on local public health guidelines, mask wearing, social distancing measures and more.

Polis said he would not consider barring travel from people who live in states where cases are again growing exponentially, as New Jersey, New York and Connecticut did earlier in the day in regard to visitors from Florida.

He said the state tourism office had put together guidance for out-of-state visitors educating them on Colorado’s public health guidelines.

“I’m less worried about the overall number of cases than I am about a trend,” Polis said.

Meanwhile, Denver officials said earlier in the day that the city had reached its goal of testing 150 people her 100,000 people per day in the city through testing at the Pepsi Center, community testing targeting underserved neighborhoods, and mobile testing that is being brought to specific individuals or neighborhoods.

Denver Department of Public Health and Environment Executive Director Bob McDonald said that Denver’s positivity rate was about 3% as of Wednesday – below the state’s target of 5%. But he and Mayor Michael Hancock said Denverites need to “hold fast and buckle down to stay ahead.”

McDonald also said there was so far no data indicating the protests had led to the slight increase also seen in the city. He, like Herlihy, said that another week of data would show them whether that uptick is a trend.

“I’m not seeing anything alarming yet, but we need to be extremely careful,” McDonald said.

All four officials talked at length about the importance of wearing masks or face coverings in stopping the spread of the virus. Denver and several other local municipalities require people to wear them in public, while the state guidelines only require workers at businesses that interact with the public to wear them and leave the issue of whether or not customers are required to wear them to counties and cities.

“This is not a partisan issue,” Hancock said. “This is not about politics; this is common sense, that when people wear face coverings, you are helping your neighbor and protecting one another.”

Polis said that mask-wearing and social distancing would be the key from preventing a growth trend with the virus in Colorado.

“We’re only a couple of steps ahead of this virus,” he said.