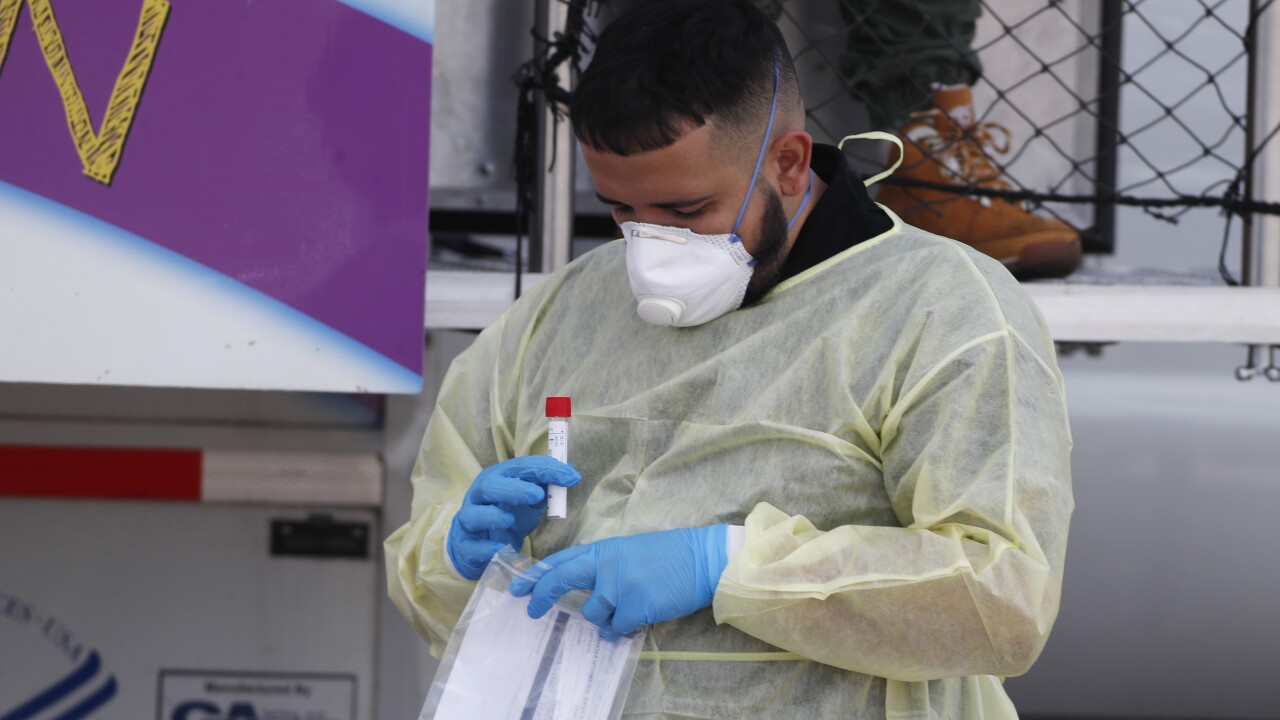 (Copyright 2020 The Associated Press. All rights reserved. This material may not be published, broadcast, rewritten or redistributed.)
David Zalubowski/AP
A medical technician at a Stride Community Health Center COVID-19 drive-thru testing site loads a vial containing a swab from a test kit into an envelope, Tuesday, March 31, 2020, in Wheat Ridge, Colo. The new coronavirus causes mild or moderate symptoms for most people, but for some, especially older adults and people with existing health problems, it can cause more severe illness or death. (AP Photo/David Zalubowski) 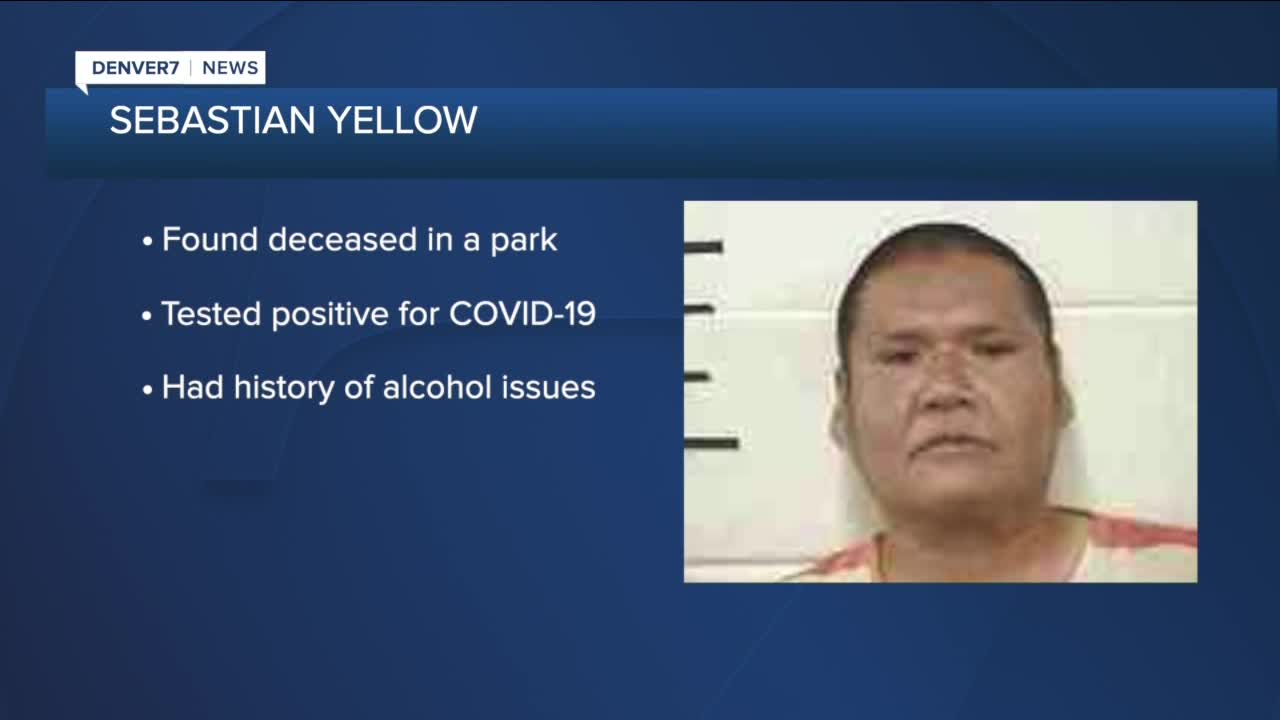 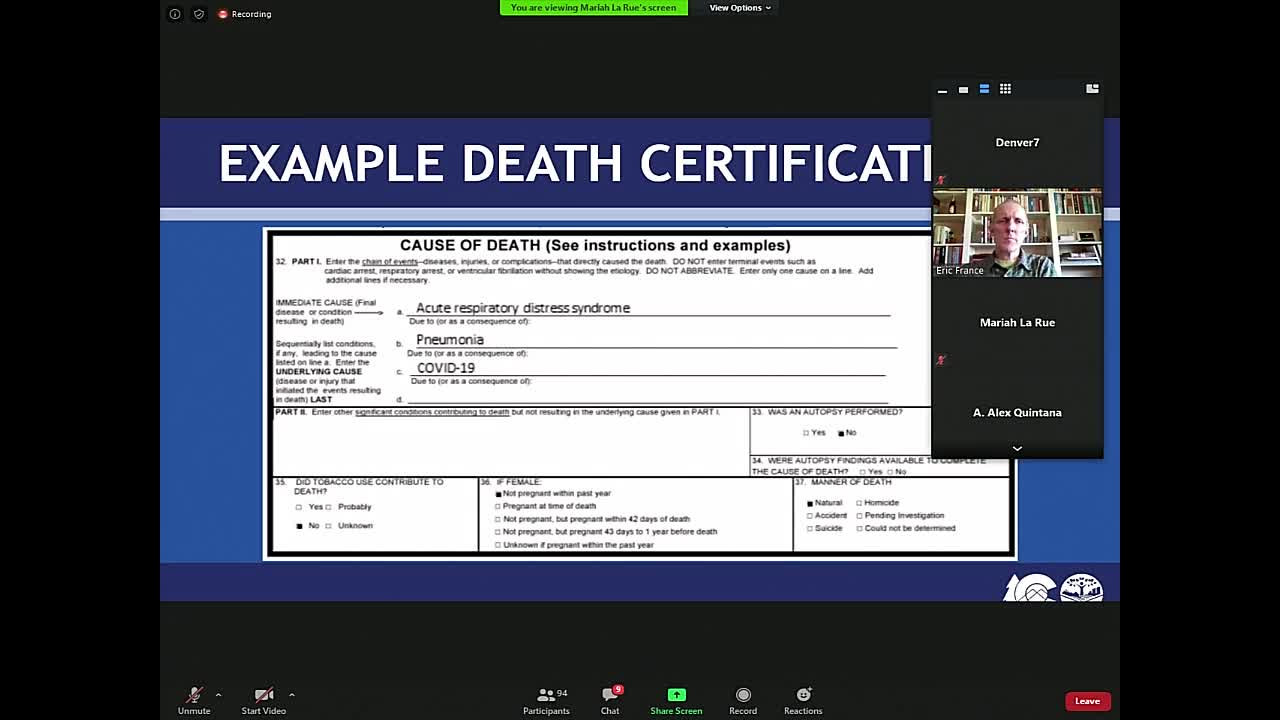 The officials – among them the state epidemiologist, the department’s chief medical officer and representatives from the Vital Statistics program – acknowledged that the difference was confusing but tried to explain to reporters and others through a presentation how the process works and why the numbers are different.

The distinction, according to the CDPHE officials, comes as a result of the way death certificates are put together by physicians, coroners and medical examiners for state epidemiologists and how the U.S. Centers for Disease Control (CDC) measures deaths on a national scale.

Dr. Eric France, the chief medical officer for the CDPHE, said that deaths occur and are reported to the department in two ways – by a physician, coroner or medical examiner on a death certificate or by health care providers, coroners or local public health departments to state epidemiologists.

The state Vital Statistics program shares information based on death certificates and the state reports deaths to the CDC through a national vital records program.

But when reporting nationally to the CDC, France and CDPHE State Epidemiologist Dr. Rachel Herlihy said Friday, it is important to have a standardized case definition across the country “So we all understand what we’re talking a death looks like for someone who has COVID-19,” France said.

France said that surveillance work allows for an “apples-to-apples comparison” where everyone is using the same definition – one that is distinct from what is seen on a death certificate.

Kirk Bol, the program manager for the CDPHE’s Vital Statistics program, showed an example death certificate in which the immediate cause of death for the person was acute respiratory distress syndrome, an illness caused as a result of COVID-19 infection.

The death certificate showed that underneath the immediate cause of death, ARDS, the underlying causes of death were pneumonia and COVID-19.

Bol said that is to ensure that medical examiners and other physicians and coroners capture COVID-19 when it is known to have contributed to a death in that medical professional’s best medical judgment.

He explained that the department has asked medical certifiers to include as much information as possible based on their knowledge of a decedent’s case and has emphasized that COVID-19 should not be reported if it did not contribute to the person’s death.

Part of the likely reason the officials held the briefing Friday afternoon was because questions and conspiracy theories have swirled from nursing homes and other parts of Colorado, and the country, about how COVID-19 deaths are being counted.

Montezuma County Coroner George Deavers questioned why a man who had a blood alcohol level of 0.55% when he died May 4 in Cortez was included in the county’s COVID-19 death count.

Deavers told Denver7 the man had tested positive for COVID-19 but had a history of alcohol issues, so he performed the toxicology text, which came back nearly double the lethal amount.

“An unnatural event overrules a natural event,” Deavers said in an interview. “If you have COVID and you fell off a building, died of blunt force trauma, a motor vehicle accident, shot in a homicide – those things would overrule the COVID.”

And a Republican state lawmaker has requested a criminal investigation into the executive director of the CDPHE, alleging that she altered death certificates – something the CDPHE officials flat-out denied was even possible Friday.

He said medical examiners might want to change their certificates based on an investigation but there is a formal process where they can amend a certificate.

Gov. Jared Polis said that any consideration of criminal charges would be “completely inappropriate” but that he had been “upset” when reading about how COVID-19 deaths were being reported and had talked with the CDPHE about the issue.

“What people want to know is not who died with COVID-19, but who died from COVID-19,” Polis said in the news conference that preceded the CDPHE’s briefing.

Herlihy explained the difference in the two counts as a parallel system that she acknowledged was somewhat confusing.

She said that the “vast majority” of deaths are going to be among people who have COVID-19 listed as the immediate or underlying cause of death but occasionally there will be cases that had a lab test done prior to or after a person’s death, which would not be recorded on their death certificate and thus included in the number of people who died and had COVID-19.

Herlihy said that initially, officials were most-concerned with the numbers reported to the CDC – the total deaths of people with COVID-19 but that they have changed their methods as more questions came in.

The officials said they expect the two numbers to converge eventually due to the lag in reporting deaths due to collection and reporting methods that they said is improving.

Herlihy said she was not sure if Colorado was the first state to separate out the two data points when reporting but that she knew other states were counting cases in the same manner as Colorado.

And France said that no matter the number of deaths, people should remember that those figures equate to real people, and that continuing to follow the state’s guidance on safer at home would be the best way to keep those figures from increasing.

“Every single death is tragic, regardless of the circumstances,” France said. “We know this virus can be deadly and can complicate other serious medical conditions and hasten death. As public health practitioners, we need to look at data that helps us understand disease transmission and protect people.”