COVID-19 incident commander: “Having enough testing capacity is one of the key requirements of opening up the state." 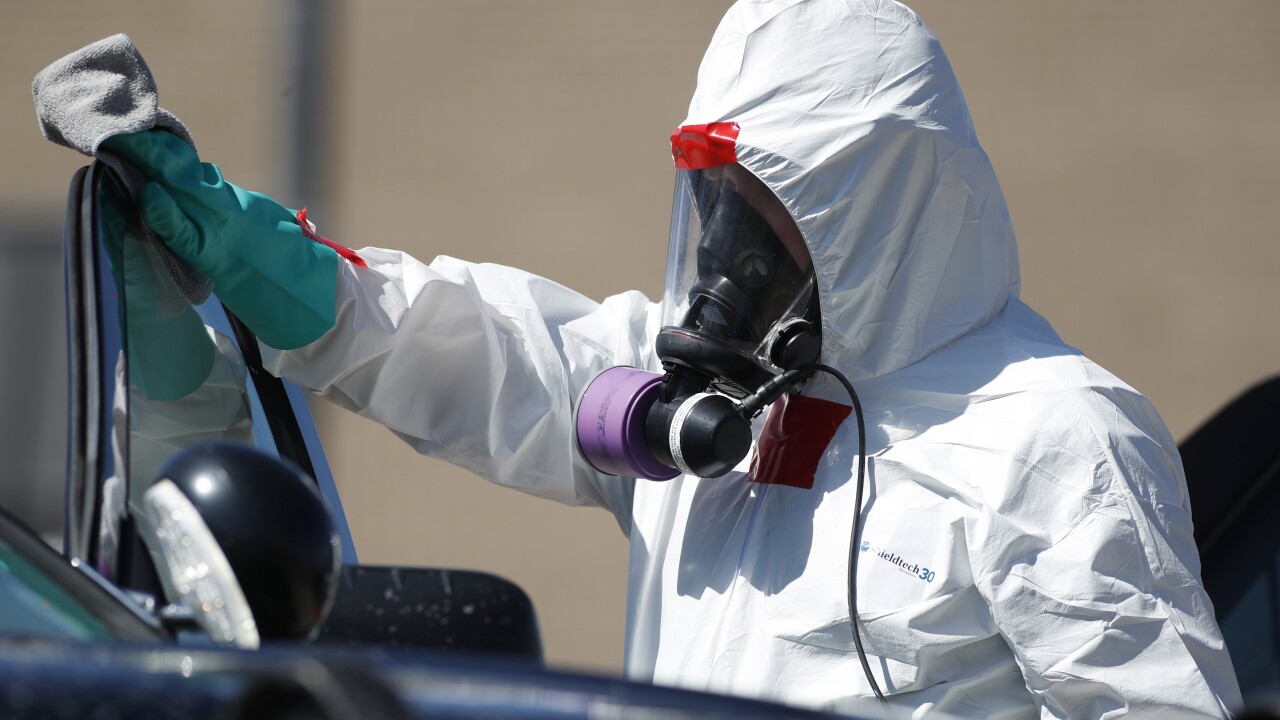 (Copyright 2020 The Associated Press. All rights reserved. This material may not be published, broadcast, rewritten or redistributed.)
David Zalubowski/AP
A biohazard cleaner wearing personal protective equipment wipes down the door frame of a police car, Monday, April 6, 2020, in Wheat Ridge, Colo., as police vehicles are disinfected to protect officers from the new coronavirus as a statewide stay-at-home order remains in effect in an effort to reduce the spread of the virus. (AP Photo/David Zalubowski) 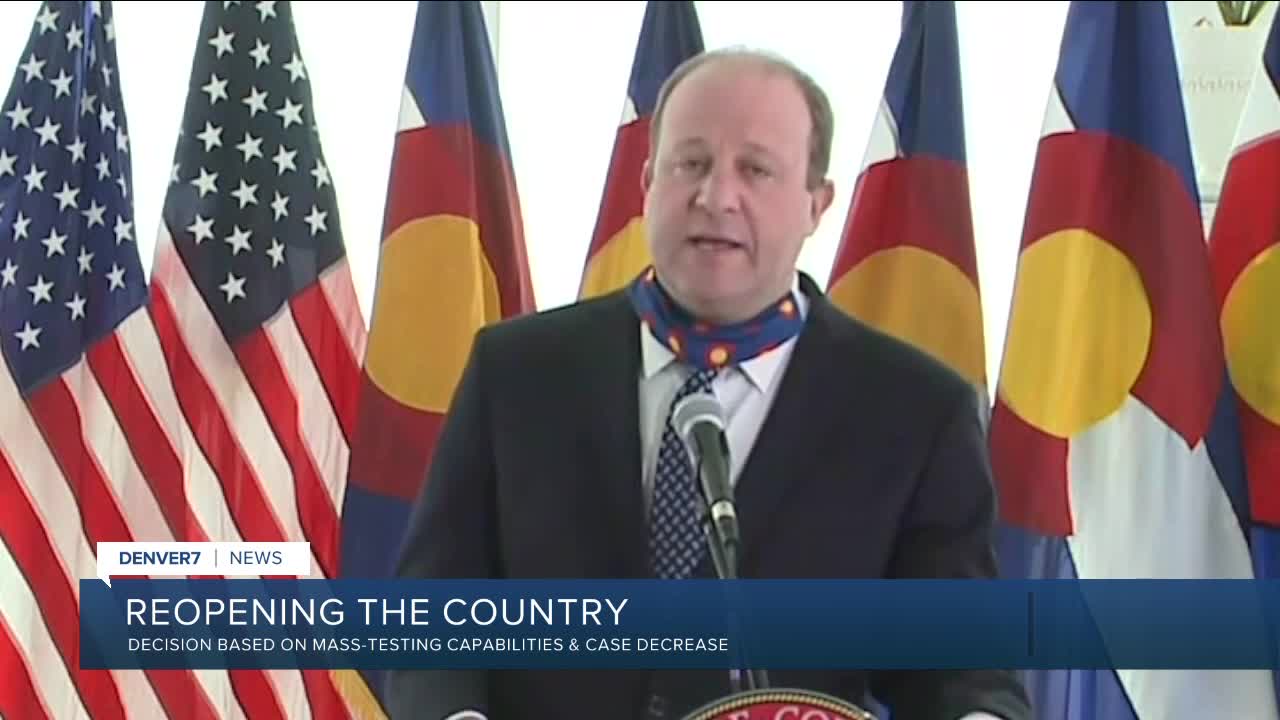 DENVER – Colorado public health officials said Thursday that getting better testing capacity and materials in place, and a robust COVID-19 identification and containment strategy, would be the “foundational element” of when the state can start to lift the stay-at-home order and other social distancing measures.

Gov. Jared Polis on Wednesday outlined what the months ahead could look like with the novel coronavirus in the state and what sort of plans the state was developing to start gradually lifting measures meant to prevent the spread of the virus.

“Coronavirus is going to be a part of our lives. We’re going to have to learn how to live with it,” the governor said as he explained how the next few days of data would be key in showing how much the statewide stay-at-home order has decreased people’s interactions with one another.

Only once the state starts seeing a drop-off in case increases, hospitalizations and deaths will it start to consider lifting the measures, officials have said this week. The current stay-at-home order runs until April 26 statewide, but Polis has said it could be dropped sooner or extended depending on what the data shows. ABC News on Thursday afternoon reported on President Trump's plan to reopen the country as it was relayed to the nation's governors.

“The national plan from the CDC and the administration has a lot of overlap with the Colorado plan the governor rolled out yesterday. No one wants to get people back to work more than Governor Polis and our state has a lot of work to do to get ready. Coloradans need to continue to stay home, wear masks when in public, social distance and wash their hands," Cahill said. "Coloradans are in this together and the Governor appreciates any effort and helpful partnership with the federal government and other states that help keep people safe and is focused on stopping the spread of COVID-19. The Governor was clear yesterday that this is his decision and he appreciates input from all informed perspectives including the federal government."

The Colorado Department of Public Health and Environment’s COVID-19 Incident Commander Scott Bookman, and State Epidemiologist Dr. Rachel Herlihy, said Thursday that better testing capabilities would be crucial to when those orders might start being lifted.

Bookman said Polis had given charge to the CDPHE to ensure mass testing can be done statewide. He said the governor was “very clear” the state would not reopen until it can keep everyone safe from the disease.

Bookman said state health officials were working with local public health agencies, hospitals and federal partners to identify locations across the state where mass testing can be performed. Officials have recently said they will also need to hire and train many people to build out the tracing network.

He said that the state was working with the federal government to get more PPE and equipment like swabs and reagents it is still short of so that more testing can be done in coming weeks.

“The goal is to have local public health agencies work with health care providers to determine the best way to do mass testing in their respective communities,” Bookman said. “The CDPHE is doing everything possible to procure the needed supplies and equipment to do testing safely and at-scale.”

For weeks, health care workers, first responders, and those hospitalized and suspected to have the virus were being prioritized for testing. There has been little indication from the state that has changed, though private labs and health care providers have stepped up private testing in the past week or two.

As of Wednesday afternoon’s data release, around 40,000 people had been tested for COVID-19 in Colorado and there were 8,280 cases that had been confirmed, though officials have also said they believe there are thousands more cases in which people couldn’t get tested.

The state also released data on new hospitalizations and discharges on Thursday.

Herlihy said that officials agree with what Polis said Wednesday, that they believe social distancing levels are at 70-80% of a departure from normal, and that where that data falls in coming days would have a major impact on if cases truly plateau and start to decline or continue to increase.

She said that the idea is to have mass testing, isolation and quarantining and other less-strict social distancing measures in place once the stay-at-home order can be lifted. Additional measures, like temperature checks and more-stringent screening at businesses and non-hospital health care facilities, would also be a part of the plan, she said.

There would ideally be testing sites in every county in Colorado and multiple sites in the more densely-populated counties, Bookman said. But he said that more swabs, reagents and PPE would be needed in order to “safely open sites for everyone.”

The state does not currently have one single person assigned to be a “testing czar,” Herlihy and Bookman said. They added that much more testing in Colorado is now being done in commercial labs rather than mostly at the state lab – “as it should be,” Bookman said.

But he was also clear that a significant ramp up in testing would be necessary before any wide-ranging reopening of the state and lifting of distancing measures.

“Having enough testing capacity is one of the key requirements of opening up the state,” Bookman said. “Until we have the locations and partners to be able to do so, we won’t be able to implement the testing strategy. … It’s a foundational element of reopening.”

And Herlihy declined to speculate on when a second peak of the virus might happen here if measures are lifted in coming weeks.

“The reality is it’s too soon to know that,” she said. “It depends on the policy decisions that are made over the next couple weeks and the ability for disease control strategies to control transmission with less social distancing in place.”