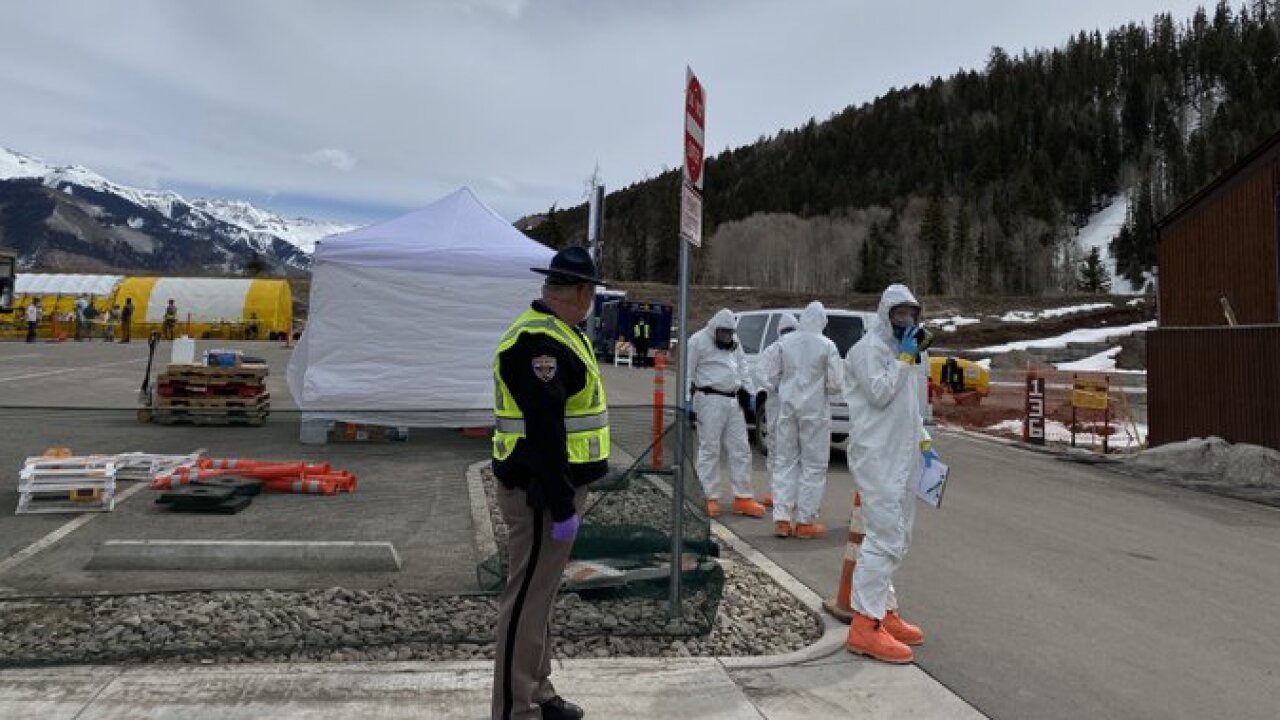 Copyright 2020 Scripps Media, Inc. All rights reserved. This material may not be published, broadcast, rewritten, or redistributed.
San Miguel County Sheriff&#39;s Office
A COVID-19 testing facility that was operational in Telluride, Colo. on Tuesday, March 17. 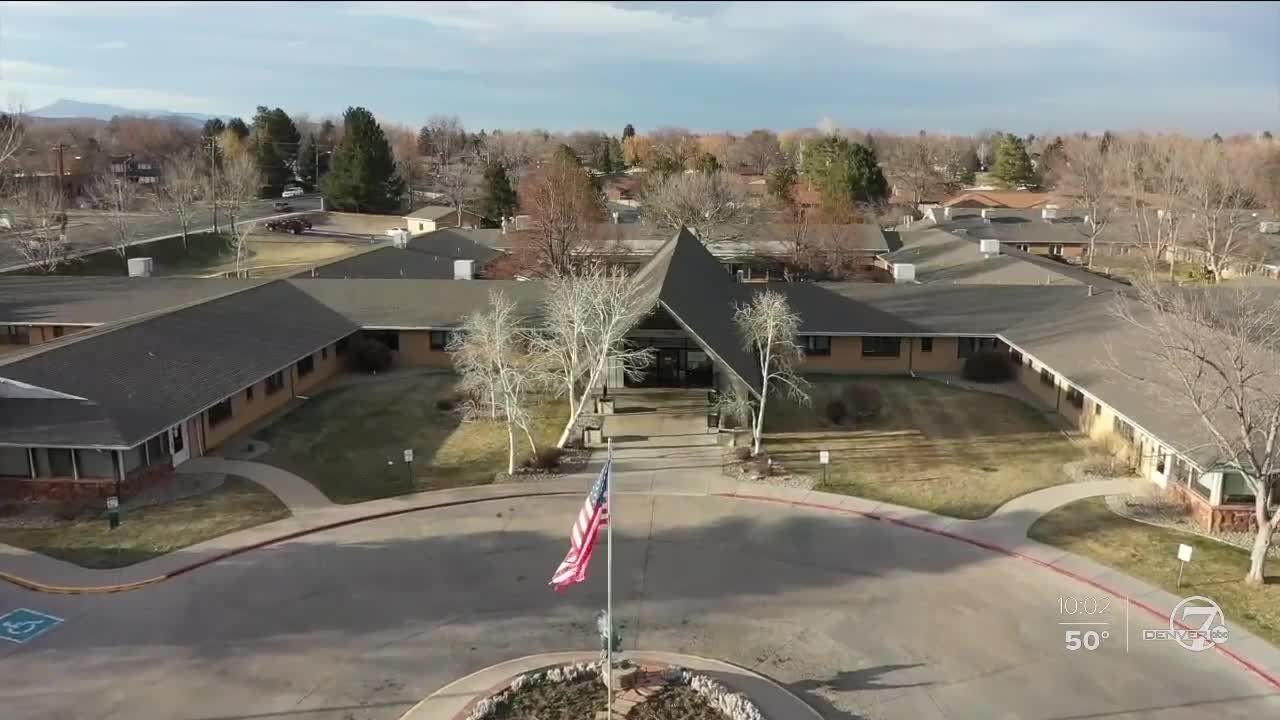 DENVER – Though Colorado is hoping it can expand its testing capacity for novel coronavirus (COVID-19) in coming days through private companies and more assistance from the federal government, only people who are at risk of the most severe infections by the virus are being prioritized for testing at the moment, the state epidemiologist said Tuesday, as the case count in the state grew to 183.

Rachel Herlihy, the state epidemiologist for the Colorado Department of Public Health and Environment, said that people who are showing few or mild symptoms but who have lower respiratory infection symptoms should isolate themselves for at least seven days and only leave isolation after they have not had a fever for at least 72 hours and their symptoms are improving.

The seven-day isolation period is also the minimum time under which someone who has tested positive for COVID-19 should quarantine themselves after they return home, Herlihy said. But they should not leave quarantine until they have been fever-free for 72 hours after the 14-day period and have improving symptoms.

The CDPHE at 5 p.m. launched a comprehensive new data-driven site to track the outbreak of COVID-19 in Colorado that has detailed information about cases, the people’s ages and genders, and locations.

As of 4 p.m. Tuesday, there were 183 cases in Colorado in 19 counties. A total of 1,790 people have been tested, according to the data. Twenty people remain hospitalized and two people have died. Denver (38) and Eagle (34) counties have the highest number of confirmed positive tests but are also among the highest-tested counties. The case rates per 100,000 people are highest in Eagle, Pitkin and Gunnison counties, where rates are all above 60 per 100,000 people so far.

Herlihy said that the new site includes private testing data on that page as well – a day after the state said that private partners were not at that time providing negative test results, which officials had said could skew infection data and that they hoped to change.

The data on the website is one day behind the data CDPHE is receiving, Herlihy said.

The CDPHE’s 2 p.m. press update came shortly after the Larimer County Department of Health and Environment announced Colorado’s first-known cases of COVID-19 inside a long-term care facility – both a female resident and a female worker at the North Shore Health & Rehab Facility in Loveland.

“The case investigation is ongoing, but to date there are no other confirmed cases associated with residents of this facility. At least six other residents of the facility have been tested, and their test results were negative. Additional tests are pending,” the LCDHE said in a news release.

Case investigation is in process to figure out who may have been in contact with the two individuals so health officials can contact them.

“Columbine Health Systems has been a strong partner with local public health, state health and the CDC, doing everything they can to reduce the spread of this virus.” says Tom Gonzales, MPH, Larimer County Public Health Director.

Yvonne Myers, the Columbine Health Systems director, which operates the facility, said the building is on lockdown and is not allowing visitors. The employee is at home in self-quarantine and the resident is in “complete health care isolation” inside the facility, Myers said.

There are currently 95 residents and 200 employees working at the facility. Employees are staying in their respective wings (there are three) to prevent cross-contamination.

The facility is social distancing by pushing beds as far apart as possible in any shared rooms and any residents with suspected symptoms are having their rooms isolated and cleaned. The facility says it is following CDC and state guidelines.

Six other people at the facility were tested and their tests came back negative.

What’s next with testing in Colorado?

Herlihy discussed the testing facility that was stood up and operational in Telluride on Tuesday and said another facility would be operational in Steamboat Springs later this week. The CDPHE is prioritizing testing in communities where they haven’t received much data so far on the virus in order to understand levels of transmission in mountain communities.

She said that the state was working with the federal government to receive more supplies from the strategic national stockpile, but called the situation challenging because the same resources are needed nationwide – not just in Colorado.

For those who are wondering when there might be another drive-up facility in the Denver metro area, Herlihy said that there is still a limitation on resources and that the resources the state currently has are being prioritized for the mobile facilities in other parts of the state.

She and other health officials on Tuesday stressed that only certain groups are being prioritized for testing at the moment – people with chronic medical conditions, those aged 60 and up who are symptomatic, and health care workers.

She said that an average person in good health and with mild symptoms likely don’t need to be tested under the current supply conditions and urged them to talk with their health care provider. And she reiterated that anyone with lower respiratory illness symptoms should isolate themselves for seven days and not remove themselves from isolation until their fever is gone for 72 hours and symptoms are improving – whether they have been tested for COVID-19 or not.

She said the risk of transmission after seven days is “very low” and despite not having a lot of data about the virus, scientists don’t currently believe that a person can get coronavirus twice – though Herlihy said there “might be exceptions for immunocompromised individuals.”

Herlihy also said that the state was working to obtain data on any possible increases in hospitalizations in Colorado because of respiratory illnesses or pneumonia.

And she said that while there was some recent research coming out that some people are asymptomatic while positive for COVID-19, there is no peer-reviewed research on that matter. She urged caution about interpreting anything from that research.

And regarding questions about the difference between COVID-19 and H1N1, Herlihy said that virus was not as infectious, and the fatality rate was lower. She said the difference means that “there’s a need to implement more-aggressive social distancing and mitigation efforts.”

And when asked about how many possible cases the state might have, Herlihy said it was “really difficult to know” because of the varying types of cases in the state – as can be the case with influenza, when some people have very mild cases and others have severe or even deadly cases.

“My recommendation is really for everyone in our community to practice social distancing … knowing that’s what’s going to change the shape of this epidemic in our state,” Herlihy said.