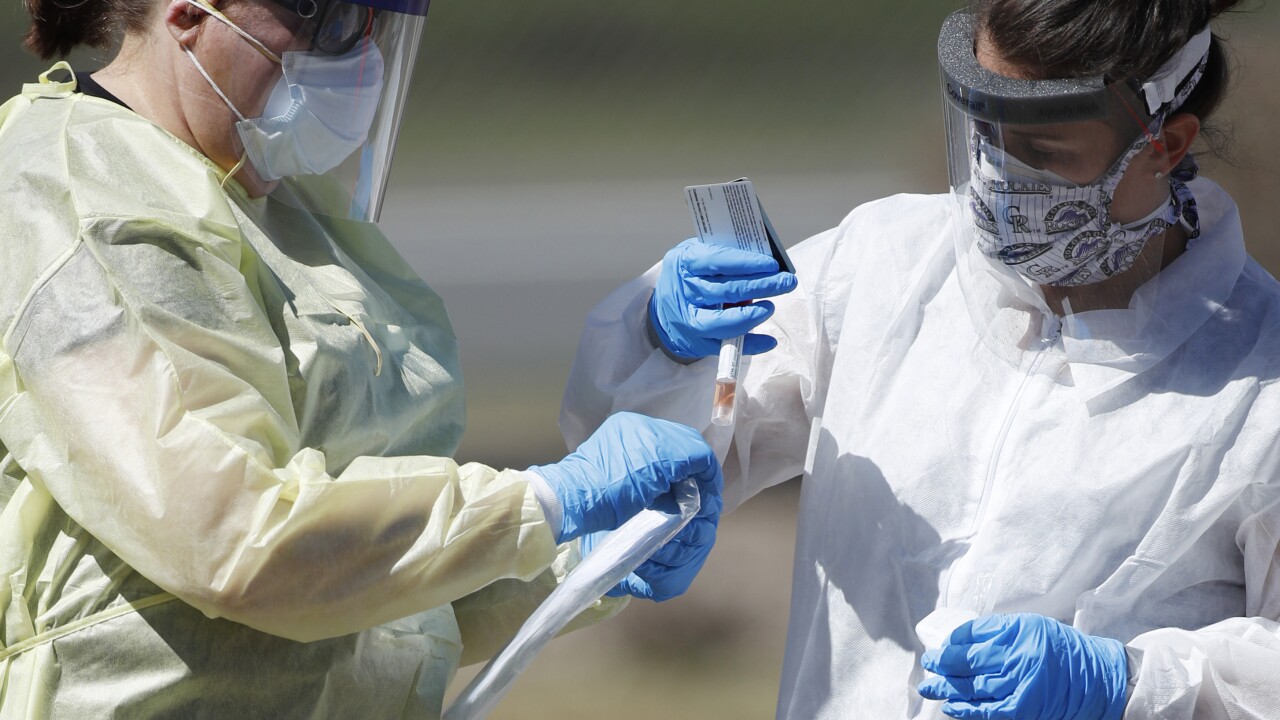 (Copyright 2020 The Associated Press. All rights reserved. This material may not be published, broadcast, rewritten or redistributed.)
David Zalubowski/AP
FILE - In this Tuesday, March 31, 2020 file photo, medical technicians handle a vial containing a nasal swab at a drive-thru testing site in Wheat Ridge.

DENVER — The Colorado Department of Public Health and Environment on Friday released a data modeling report that showed Colorado is likely to exceed its April peak of hospitalizations in the next two weeks and could exceed its intensive care capacity in January, if current COVID-19 trends hold.

The ICU capacity could be reached even earlier, in December, if trends continue and gatherings increase over the holiday season, according to the data modeling report.

If current COVID-19 trends hold — and cases have been on the rise for weeks, prompting more restrictions in Denver and surrounding counties — then Colorado would likely exceed its previous hospitalization peak by Nov. 10 and reach ICU capacity in mid-January.

"The magnitude and timing of reductions in transmission will determine the severity of COVID-19 in Colorado in the months ahead," the modeling report said.

The most recent data showed 80% of intensive care beds in use across Colorado.

Before the COVID-19 pandemic, Colorado had about 8,400 hospital beds and 1,800 intensive care beds. The state has the capacity to expand the number of beds to about 12,500, including up to 3,700 intensive care beds, if needed. Alternate care sites, when activated, could also hold up to about 2,200 beds, according to data shared by Gov. Jared Polis this week.

The estimated effective reproductive number, or Re, in Colorado is 1.6 – an increase from the 1.08 Re number the state reported in early September, at a time when the modeling group predicted a surge in cases for October and November.

The modeling report Friday came at the end of a week that saw officials from Denver Mayor Michael Hancock to Gov. Jared Polis warn of the rising COVID-19 cases and hospitalizations.

Denver on Wednesday moved to the Safer at Home Level 3, meaning businesses will face further restrictions regarding the capacities at which they can operate.