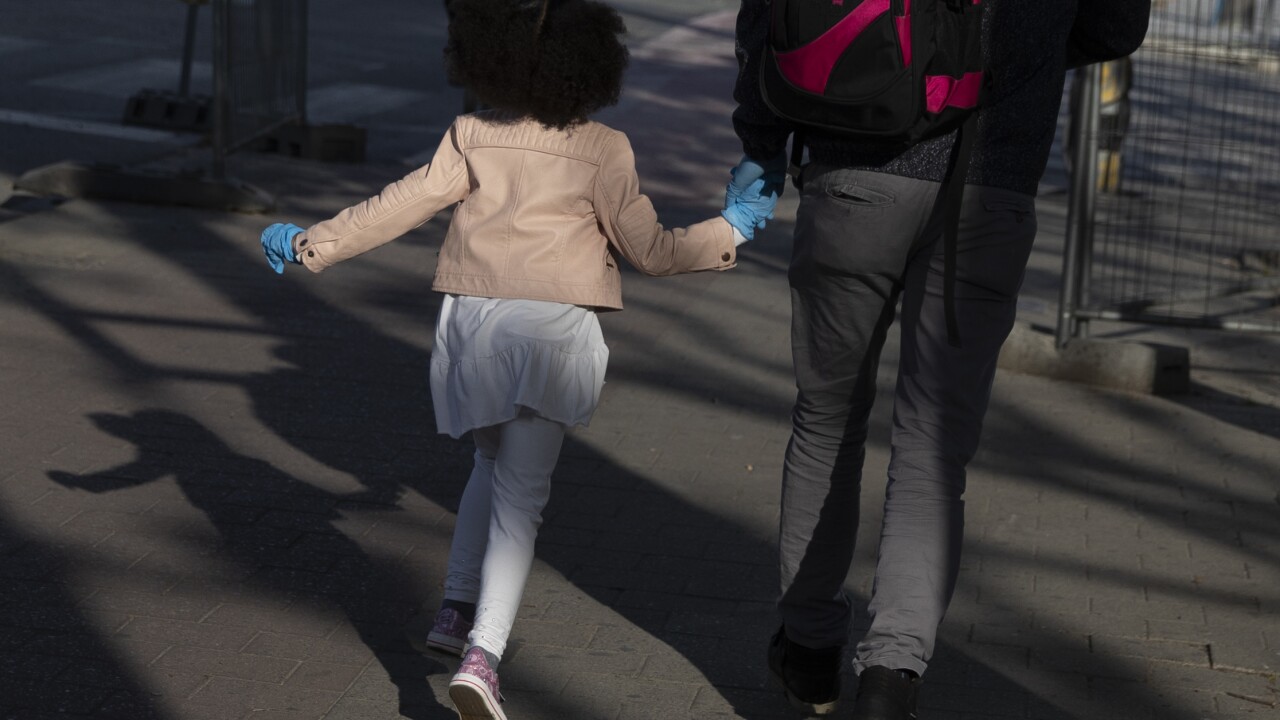 (Copyright 2020 The Associated Press. All rights reserved. This material may not be published, broadcast, rewritten or redistributed.)
Virginia Mayo/AP
A man and child with rubber gloves run in front of a school, during the partial lifting of coronavirus, COVID-19, lockdown regulations in Antwerp, Belgium, Monday, May 18, 2020. Belgium is taking the next step in its relaxation of the coronavirus lockdown on Monday, with more students going to school, markets and museums reopening and the snip of a barber's scissors filling the air again. (AP Photo/Virginia Mayo) 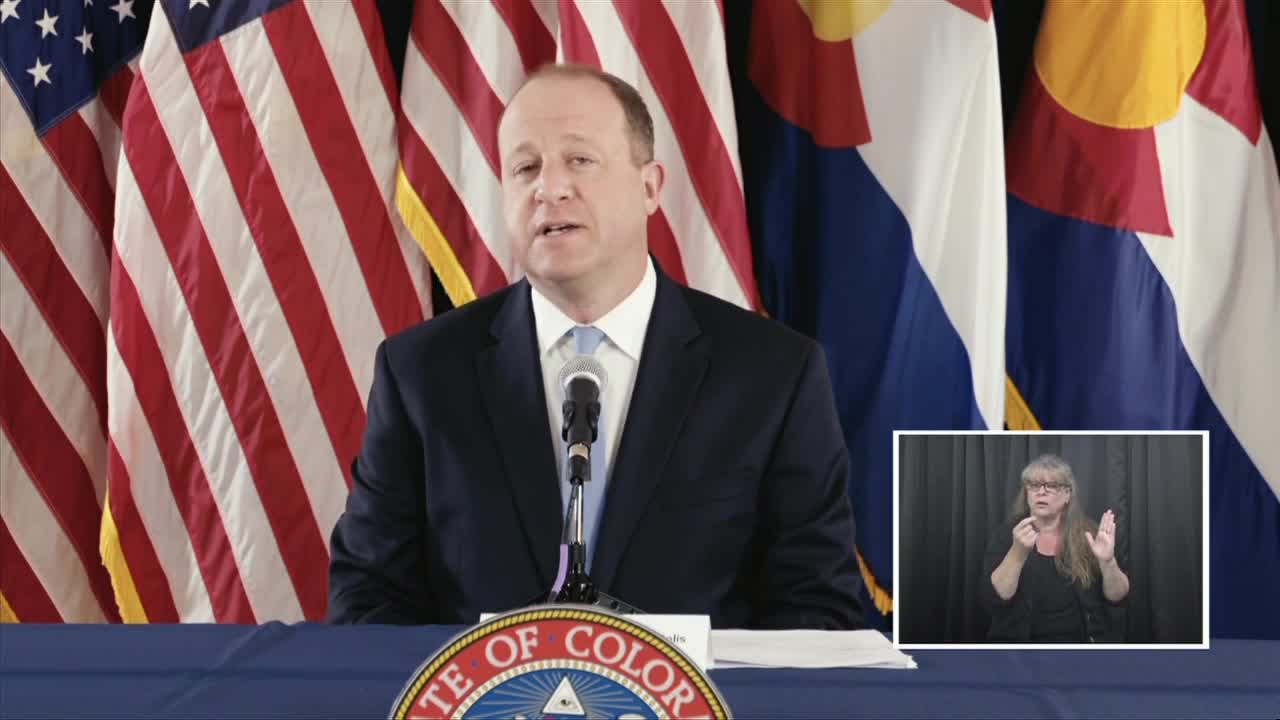 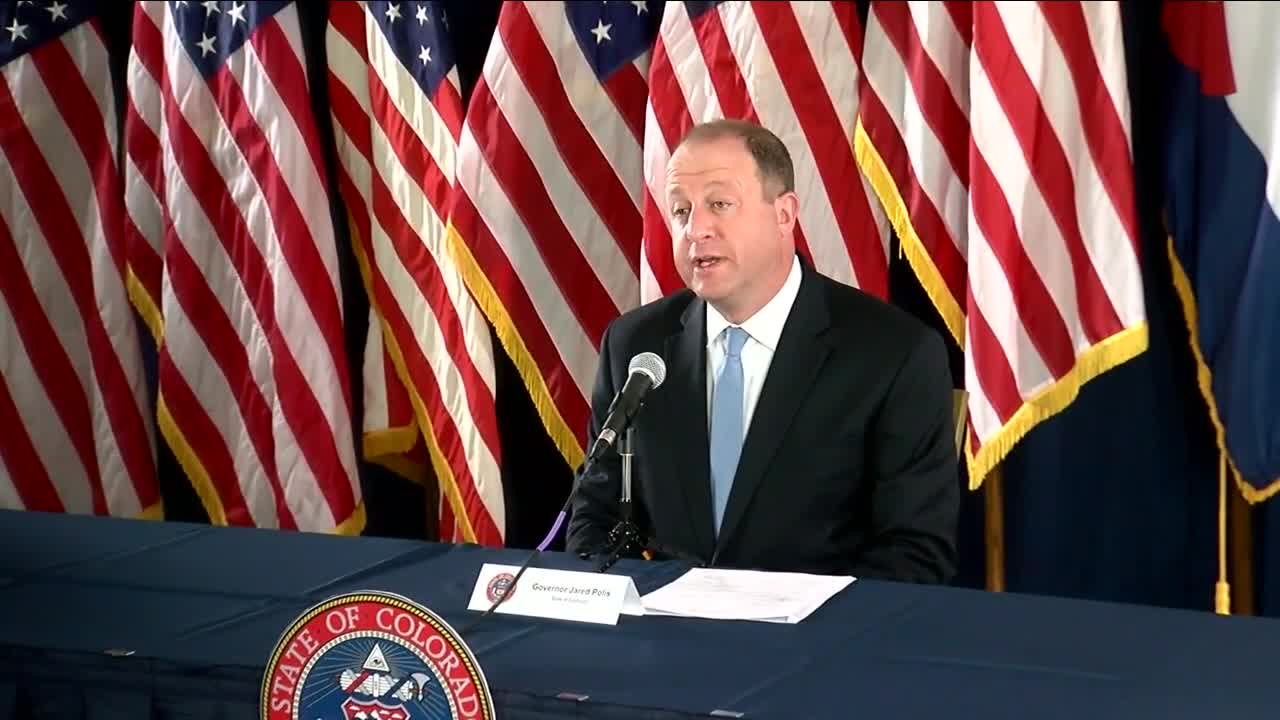 DENVER – The governor and health officials announced Wednesday three suspected cases of a new inflammatory syndrome being seen in states across the country involving children in Colorado that medical professionals believe is related to COVID-19.

While the officials said that the syndrome, known in the U.S. as Multisystem Inflammatory Syndrome in Children (MIS-C), is believed to be rare, they said that Children’s Hospital Colorado is researching the syndrome and working on treating the children with suspected cases.

Dr. Samuel Dominguez, who specializes in pediatric infectious diseases, said at the governor’s afternoon news conference that medical professionals are still working to understand the syndrome, which he said was first reported a couple of weeks ago in Europe. But he said that so far, experts believe the syndrome is rare.

He said that initial information shows the syndrome generally affects children between the ages of 5 and 15, though there have been some cases of children up to age 20 having the syndrome. He said there are just more than 100 current cases in the United States.

He acknowledged there was still much officials do not know about MIS-C, but said that most cases have shown up about four weeks after COVID-19. He said that suggested the syndrome was a post-infectious or inflammatory response to the virus as opposed to one that would cause long-term damage to those who contract it.

Children typically have very high fevers for several days and typically experience body inflammation, particularly in the gastrointestinal system and sometimes in the coronary system.

Dr. Dominguez said that the syndrome can present similarly to Kawasaki syndrome, which similarly affects children through inflammation. But he said that early information is showing medical professionals some differences between the two.

Dominguez said that Kawasaki syndrome typically affects toddlers and not older children and can include red eyes, lips and swelling of the hands and feet. He and State Epidemiologist Dr. Rachel Herlihy said that parents should look out for any of those symptoms in their children and consult with their doctor as to whether their children should come in for treatment.

The two medical professionals said that MIS-C can typically lead to hospitalization for patients but that most recover – especially with aggressive treatment.

They said that tracking the spread of the new syndrome while tracking COVID-19 has shown that while COVID-19 can affect people of all ages, it could potentially carry side effects in younger people, who often show mild or no symptoms of the novel coronavirus if they have it.

The U.S. Centers for Disease Control posted a health alert about MIS-C on May 14. Herlihy said that officials discussed the syndrome with medical providers of the last two weeks to work to be sure they know what to look for regarding MIS-C and how to report suspected cases to the CDPHE.

She said one of the three suspected cases was identified through a review of previous cases and the other two were reported recently. She said that the CDPHE and Children’s Hospital were working to identify whether any previous COVID-19 cases potentially meet the CDC’s case definition of MIS-C.

Dominguez said Children’s Hospital was ready to treat children with the syndrome and that the hospital had formed a team to draft guidelines for MIS-C treatment.

He also reassured parents it was safe to bring their child to a hospital for care across the state.

The CDC says it is not currently known if MIS-C is specific to children or if it also occurs in adults, but it recommends that providers who have cared for patients under age 21 who meet MIS-C criteria to report suspected cases to their local or state health departments.

The case definition from the CDC for MIS-C says that a person has to be under 21 years of age, showing a fever, lab evidence of inflammation, evidence of an illness requiring hospitalization with multisystem organ involvement and no alternative plausible diagnoses. The person also has to have tested positive for current or recent COVID-19 disease or exposure within the 4 weeks before the onset of the MIS-C symptoms.

Herlihy and other CDPHE officials said at a briefing earlier in the day that the Colorado School of Public Health believes around 167,000 Coloradans have contracted COVID-19, compared to the roughly 23,000 cases already confirmed by testing.