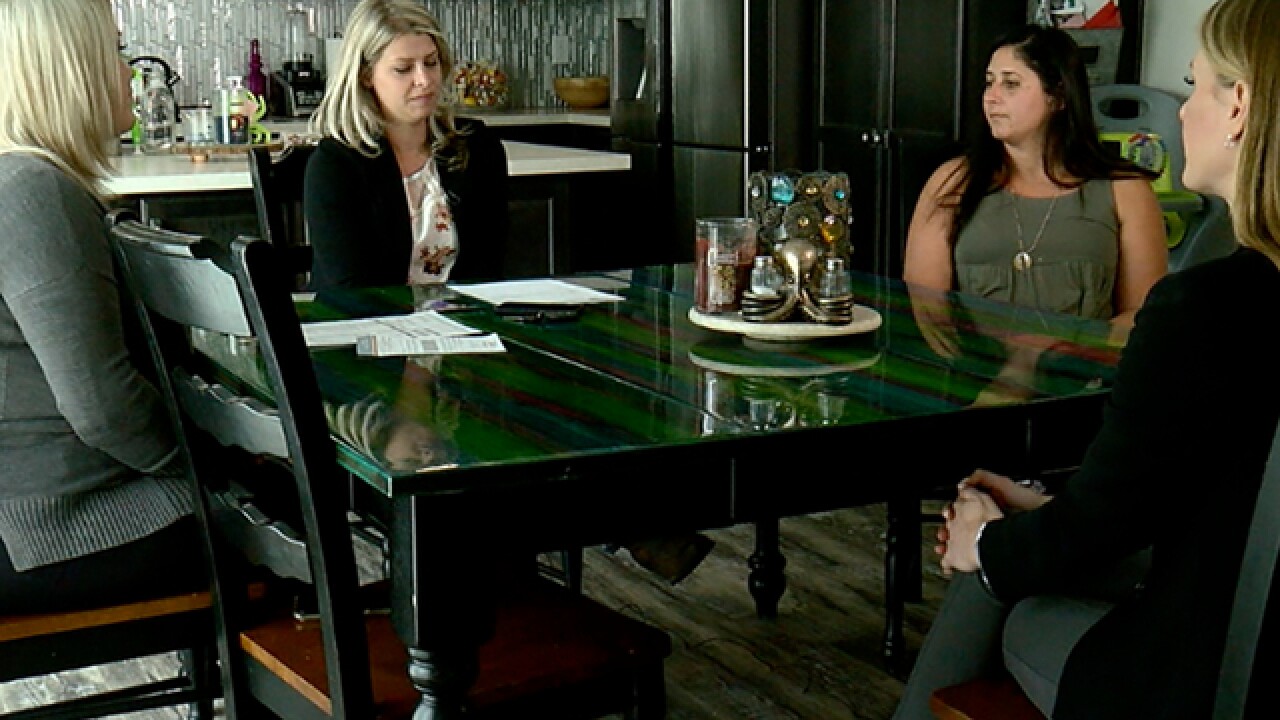 Copyright 2018 Scripps Media, Inc. All rights reserved. This material may not be published, broadcast, rewritten, or redistributed.
<p>A Colorado pediatric dentist is accused of doing unnecessary procedures on young children, putting them under anesthesia and taking advantage of trusting parents.  Now, those parents are coming forward to Denver7 to expose the practices of Treasured Teeth and to get answers.</p>

REUNION, Colo. — Every time she helps her daughter brush her teeth, Ashley Conn feels that most dreaded of feelings: mom guilt.

"You want to think you brush your kids right. You know, you already have that mom guilt over every decision you make," said Conn. "How was I to know I couldn't trust him with her care?"

Conn's 7-year-old daughter Scarlett has a mouth full of metal crowns that Conn now believes were a mistake.

For her, this all started this spring with a trip to Treasured Teeth Pediatric Specialist in Reunion and Dr. Derren Tippets. While Tippets would not talk on camera to Contact7, he has posted videos on YouTube discussing his philosophies.

"So, I end up treating your kids as if they were my kids," said Tippets in one video. "Giving them the very best, the most conservative and very, very best treatment for them."

But Conn said when her daughter had X-rays done, Tippets said she had "eight-plus" cavities and needed eight crowns. During the procedure, Dr. Tippets said Scarlett's two front teeth had to be pulled while she was under anesthesia.

"But that morning, her two front teeth weren't loose at all. At all," said Conn. "I would have noticed if they were loose. If she had loose teeth she would be telling the world about it because that's very exciting for her. He said they were loose. She could choke on them in her sleep. 'We have to do it for safety reasons for her.'"

Instead of trusting her gut, Ashley trusted Dr. Tippets, and the teeth were pulled. But the nagging sense of mom guilt wouldn't go away. So, she sought a second opinion from the X-rays. She showed Contact7 a message from another dentist who told her Scarlett should have had two crowns – not eight.

"She was way over-treated," said Conn, but it was only after she saw a thread on her Facebook group in which she keeps up with other moms that she realized her daughter wasn't alone. "A lot of people with the same exact story. This mom posted, 'They told me my son had nine cavities. I took him for a second opinion and the other dentist said he just needed sealants.'"

"To me, he's a monster," said Kalodemas, who said that when her son was just five years old, Dr. Tippets diagnosed him with eight cavities.

Kalodemas got a second opinion.

Her complaint to the Colorado Dental Board led to an investigation and a Letter of Admonition for Dr. Tippets last year, calling his treatment plan "aggressive and unnecessary" – effectively a slap on the wrist.

Other parents are also coming forward with stories and say they are planning to file complaints.

"I had to fight them over this," said Tehila Hatheway, who said Treasured Teeth billed her for a treatment her son didn't get. "And they said if I don’t pay it, it goes to collection, and I said, 'I’m not paying for something that was not done.' It just makes no sense."

Several other parents emailed Contact7 with similar stories, including Stacie Kent, who wrote that she took her 2-year-old son to Treasured Teeth in 2014 and was told he needed six fillings and would need to be sedated. Another dentist looked at her son's mouth and told her he didn't see any cavities or a need for fillings.

"I showed him the paperwork from Treasured Teeth and he apologized – said it gave dentists a bad name," wrote Kent.

Brittnie Kreutzer remembered being impressed with the pirate ship waiting room at Treasured Teeth. She emailed that Dr. Tippets told her that her son needed two crowns, but when she got a second opinion her dentist told her there was no need for crowns.

"They wanted to put MY CHILD through unnecessary anesthesia, unnecessary dental trauma, and add unnecessary additions to his mouth all for thousands of dollars," Kreuzter wrote. "My child is NOT a dollar sign. They are taking advantage of worried moms who are just trying to do their best for their children by creating problems that aren't even there to begin with. It is shady and it is criminal. I tell everyone I know not to visit Treasured Teeth."

In March 2018, Elizabeth Blaskowski took her 3-year-old daughter to a routine cleaning appointment at Treasured Teeth Reunion and was told her daughter had three cavities. She got a second opinion from a relative who is a practicing dentist, who examined the child's mouth and saw no cavities. But Blaskowski said the office would not send her all of her daughter's X-rays to show the other dentist. She decided to trust the dentists at Treasured Teeth and had the cavities filled.

"After hearing of other stories ... I became very concerned that I had been lied to, and my daughter in fact did not have the actual cavities that two different dentists at Treasured Teeth had told me she did," wrote Blaskowski. "The conscious sedation medication was absolutely a horrible experience, and I would never want to put my child through again. She was overly medicated in my opinion, and it took a whole day and a half to return to her normal state after the medicine, when the fillings were just a half-hour procedure."

Conn's daughter was covered by Medicaid at the time of her treatment, which cost $3,657.

She said it took four months for her little girl's front teeth to finally start coming in, and she is still waiting to get the X-rays of her daughter's front teeth that show the permanent teeth supposedly coming in. She says Treasured Teeth sent her the wrong child's X-rays.

Dr. Tippets did not respond to Contact7's request for an on-camera interview, but in a written statement said, "We take these accusations seriously," but due to federal HIPAA privacy laws, "We are obligated not to respond."

"I think there's strength in numbers," said Kalodemas, who said she and other mothers believe their mom guilt was exploited to make them feel like they hadn't taken good care of their children's teeth. "These little kids —they’re so easy to take advantage of and it’s driven by money."

To give some context, the Colorado Dental Board gives letters of admonition to an average of 20 dentists every year.

The Former President of the Colorado Dental Association said there are red flags parents can watch for if they are concerned about a bad dentist.

"Make sure there is someone else who may have a different point of view," said Dr. Jeffery Hurst, the former president of the Colorado Dental Association."Maybe it's a less aggressive approach. It may be the exact same plan, but you can at least get that peace of mind knowing people are looking at your case if you have any questions or concerns."

Dr. Hurst said it is important to treat baby teeth, and crowns and fillings are not uncommon.

"Too many people think that because they are baby teeth, you can just let them go they are not going to be there that long, but I would mention that they are very important for so many other aspects other than just to smile with," he said. "Eating with them, speaking with them, not to mention the pain you can have from an abscessed baby tooth. You may have a very negative outlook because you're in pain all the time."