Highlands Ranch woman fighting an $11,000 hospital bill for being treated at ER in Las Vegas 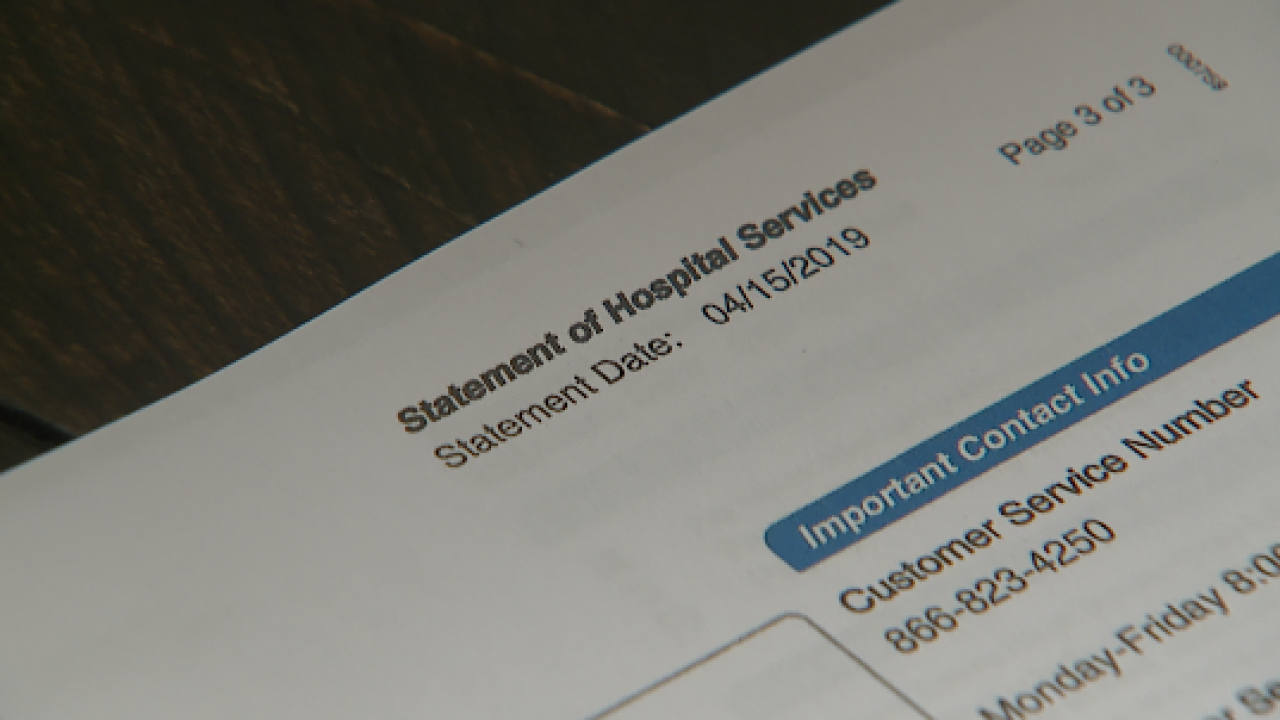 A Highlands Ranch woman is fighting an $11,000 hospital bill that she accrued while being treated while she was in Las Vegas. 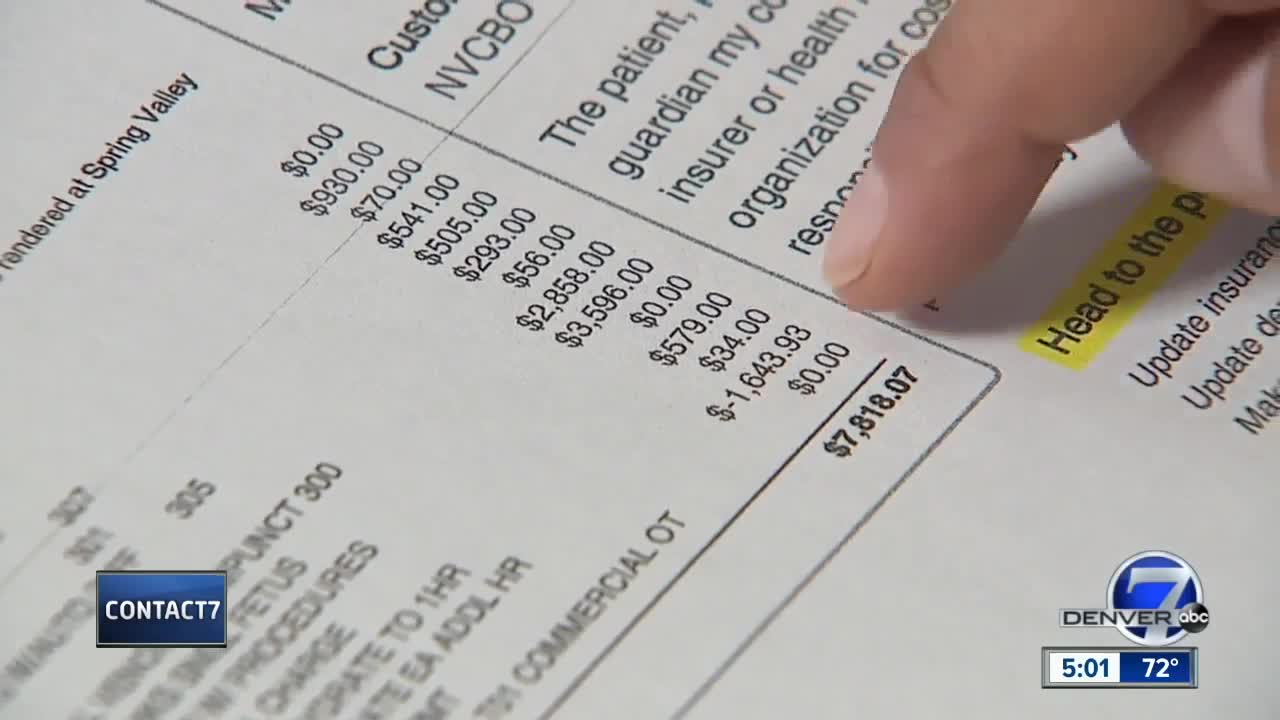 HIGHLANDS RANCH, Colo. -- A Highlands Ranch woman who went to an emergency room in Las Vegas after she started to have irregular contractions is now facing more than $10,000 in medical bills and says she’s not getting help from either her health insurance provider or the hospital.

Cristina Ford was about 15 weeks along when she attended a RE/MAX convention in Las Vegas for work.

“It’s their big event of the year, and it’s always a good time,” Ford said.

On the morning Ford and her sister were set to fly back home to Colorado, she started experiencing contractions.

“When I called the doctor, what was alarming was that the contractions were very consistent, they were not Braxton Hicks,” she said. “She said, ‘Absolutely do not get on that plane unless you get checked out. I don’t want you to go into labor in the middle of the air.’”

A warning like that is enough to scare any expectant mother. However, in Ford’s case, it was more alarming because before this pregnancy, she had miscarried a baby right around the same time.

“So, that was the first thing that went through our head,” she said. “At that point, we were so scared.”

Ford called her husband Lucas and together they decided that it was best for her to go to a nearby emergency room. The family has a catastrophic plan with insurance provider Bright Health, which is a basic plan with a higher deductible.

She went to Spring Valley Hospital and was treated by the staff for dehydration. While she was there, Ford paid more than $1,640 to be treated. She spent about two hours in the hospital while the staff ran tests and gave her a saline bag.

“They did the basic urine testing, that kind of stuff, I got one bag of saline and an ultrasound and that was it,” she said.

The staff at Spring Valley determined that Ford was dehydrated, treated her and allowed her to leave. Ford said she spoke with the doctor himself at the hospital for no more than a minute as she was being discharged.

The bills for that visit didn’t start coming in until more than a month later.

Two weeks later, a bill was sent to her for $114.50 from Laboratory Medicine Consultants Ltd. for tests including a blood typing and count, a gonadotropin, urinalysis and a basic metabolic panel.

On May 23, a bill for $1,266 was sent to Ford from Shadow Emergency Room Physicians for an emergency evaluation and management as well as a non-invasive pulse oximetry.

“I was just in shock honestly I couldn’t help but laugh,” Ford said.

Bright Health also sent a series of documents to her explaining the charges and the amount it would cover. In the end, the bills added up to be about $15,000 for the visit. Bright Health agreed to cover $3,784.

“We don’t have $11,000 just laying around the house,” said Ford’s husband Lucas. “It’s confusing and I mean what are we paying insurance for?”

So, the family started trying to work with their insurance company to see what could be done to lower the cost of their portion of the bill.

“I called Bright Health several times and what they said is that they have applied a certain amount toward my deductible, and they can’t do anymore because it was an out of state visit,” she said.

She also tried calling the hospital and doctors to talk about the charges but says she hasn’t received much help or an explanation for why the bills were so high.

"And nobody can really get help between the hospital and the insurance,” Ford said.

So, Ford put up a message on a Facebook page and started asking people what they would do. The post garnered dozens of comments from people, some of whom said they had been through a similar situation.

“They were telling us similar stories of how unfair it is and how skewed the insurance industry is and how confusing it is,” she said.

The director of strategic engagement for the Colorado Consumer Health Initiative, Adam Fox, says navigating the out-of-network system can be difficult for consumers.

“Often times that puts the consumer in a difficult situation because they don’t know what portion of that bill they might be responsible for, if any, and it could be very confusing,” Fox said.

Much of it comes down to individual insurance providers and how they work with their customers. Some providers are better than others at helping people pay in-network costs, even for out-of-network treatment, however state law does not require it to do so.

“Bright Health, in this case, is a newer insurance plan and they are still figuring out how they conduct themselves in the market, but that’s not an excuse to leave a consumer on the hook with a bill like this,” Fox said.

This is not the first time the Colorado Consumer Health Initiative has heard about complaints with Bright Health.

“Enough to make us realize they’re not they’re not holding consumers harmless like other insurance carriers might,” Fox said.

This past legislative session, Colorado lawmakers passed a bill into law that ends some of these surprise bills for consumers. However, House Bill 19-1174 doesn’t go into effect until January 1.

“The challenge is that those laws only regulate the insurance plans and the providers in Colorado,” Fox said. “It really doesn’t help regulate when someone is out of our state and that is why we need some federal level action on this issue to make sure that consumers are protected from surprise bills,” he said.

For now, Fox says the best thing people can do if they need to get medical treatment out of the state or out of their network is:

-If you have time, call the insurance provider beforehand to ask where they would recommend for you to go.
-Get medical help but, if possible, seek the lowest level of care you think you can reasonably be treated with to lower costs.
-Afterward, call your provider to find out what they will cover. Then, ask the provider if they can help you work with the hospital or care provider to lower the remaining cost.
-If you don’t think you are getting the help you need, reach out to a consumer group to see if they can help.

“We never want to discourage people from seeking the healthcare they need,” Fox said.

Contact7 reached out to Bright Health to try to get the Ford family some answers. The insurance provider sent back the following statement:

“We are aware of Ms. Ford's issue and our Patient Advocate team is working closely with her to help her find a resolution.

Bright Health covers out-of-network emergency care at the rates we pay in-network. When a member of Bright Health plan goes out of network for emergent services, their responsibility (deductibles, copays and coinsurance) are the same as if they had sought in-network services. We work hard to ensure that rates we negotiate for all services are fair and reasonable, and believe that those are the rates we have honored in this instance.

Like with most health insurance plans, Ms. Ford’s plan has a deductible. Since in this instance she has not yet used her full deductible, we credited the amounts due for this visit against her deductible.

Out-of-network emergency rooms are not obligated to accept that payment amount as payment in full. When that happens, the emergency department can send members a balance bill for the difference, over and above the amounts they pay as part of their Bright Health plan. This is the remainder of the amount that Ms. Ford is being charged by the hospital.

Because the health of our members is of the utmost importance, like with all of our members, we are working with Ms. Ford to help her resolve this bill."

In a statement emailed to Contact7, a spokesperson said the hospital cannot discuss billing or specific patient issues due to federal privacy laws:

We encourage patients to contact the billing department to discuss private financial matters and determine what options are available. Our hospital offers a charity care program, and also works directly with patients to address their billing concerns and make payment plans.

Despite the bills and frustration, Ford says she doesn’t regret her decision to seek treatment.

“I feel like I shouldn’t have to regret it. I still think I would do it over again just to make sure that my baby is safe,” she said.

For now, the family is still fighting the bills and warning others about what happened to them.

“Just be aware that this could happen,” she said. “I think it would be (the same) with any insurance company, quite honestly.”