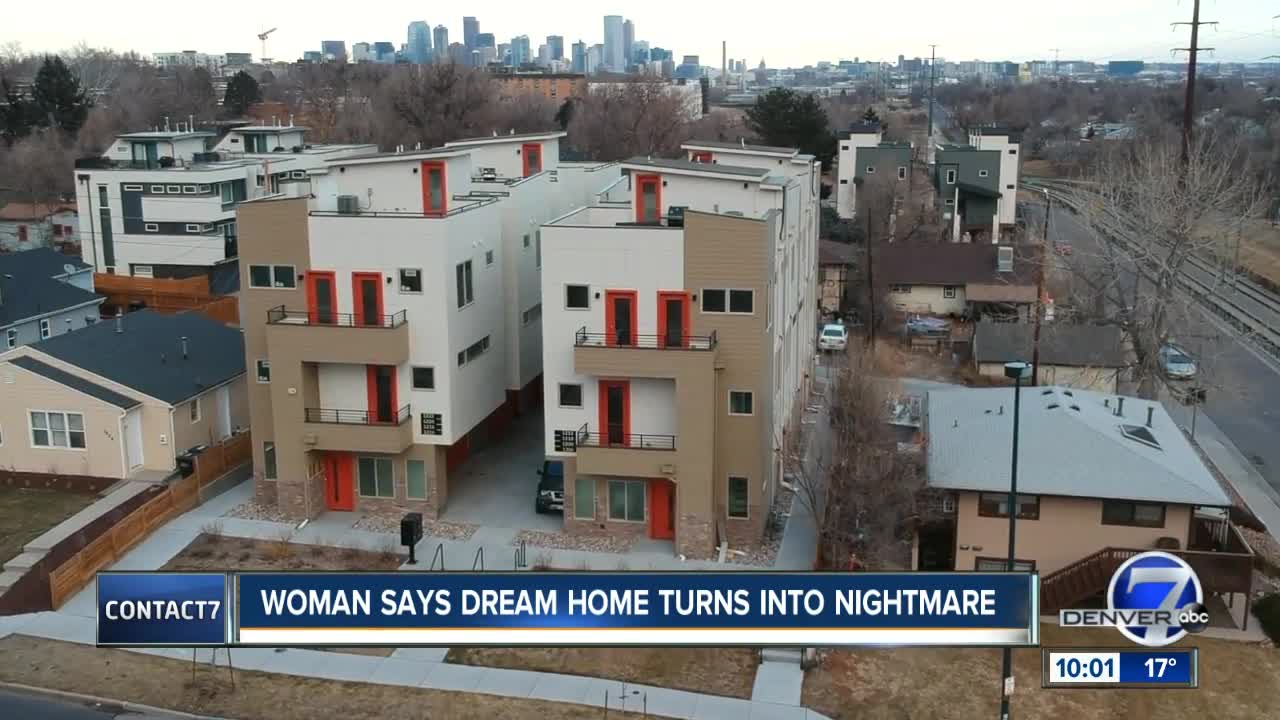 Rhonda Kelly thought the slot home she bought brand new in February was her dream property. It has since turned into what she calls a “nightmare house.” DENVER — Rhonda Kelly thought the slot home she bought brand new in February was her dream property. It has since turned into what she calls a “nightmare house.”

“I’ve had an amazing array of issues since I moved in, things I was shocked to find in a new home in 2018,” she told Contact7.

Kelly was told she didn’t need a home inspection before she closed in February, since the property was a new build and she had a full one year warranty from the builder for minor fixes.

She started noticing issues a few months into owning the home: A bedroom window that bowed out and wouldn’t close, a water leak surrounding a different window.

Those smaller issues eventually gave way to larger ones. Her oven leaked gas and carbon monoxide, eventually tagged by the gas company as an “explosion hazard.” Water from her 3rd-floor shower drain would end up leaking out around a light fixture on the second floor and onto a landing. Cell phone video shows the continuous dripping from the recessed lighting onto the staircase landing below.

“When I bought a home from a professional builder that was approved of by the city, that passed code, I expected to get a home that was weatherproof and livable, and it’s just gotten continually worse over the past ten months,” Rhonda said.

The builder, Sustainable Design Build, did not return Contact7’s emails requesting a comment.

Then came the biggest problem of all - the structural integrity of the home itself.

“The city found that this building was not engineered to the appropriate code,” Rhonda explained.

According to an email from Sustainable Design Build, Rhonda’s building and unit were “part of a structural re-review process with the City and County of Denver and there could potentially be some structural components of the building not designed in accordance with all necessary code requirements.”

“The beam over the garage door isn’t load rated high enough to withstand a wind shear event or a high wind event,” Rhonda said, adding that the city’s concern was that in high enough winds her building could collapse.

The city ordered a wooden beam be installed in the unit’s first-floor garage to support one of the load-bearing steel beams of her home. That wooden beam was delivered in July, and emails show the builder planned to start work the next week. The beam wasn’t installed until September. As of Dec. 28, it was still in place, blocking her garage door from opening.

The home cost $470,000. As for a new timetable for a fix to any of the issues plaguing her home, Rhonda says she has gotten nowhere with the builder.

“We will add these to the list and we can address them when work is being done,” a November email from Sustainable Design Build to Rhonda read.

“It doesn’t seem like they care and they don’t seem to be taking responsibility for construction they produced,” she said.