Denver veteran gets new scooter, much more thanks to Denver7 viewers

Some stories we tell really strike a chord, and you, our viewers, want to help. A disabled veteran whose scooter had been stolen during the George Floyd protests was one of those stories. We have never seen such a response, which is even more incredible considering a lot of people are hurting financially themselves right now. 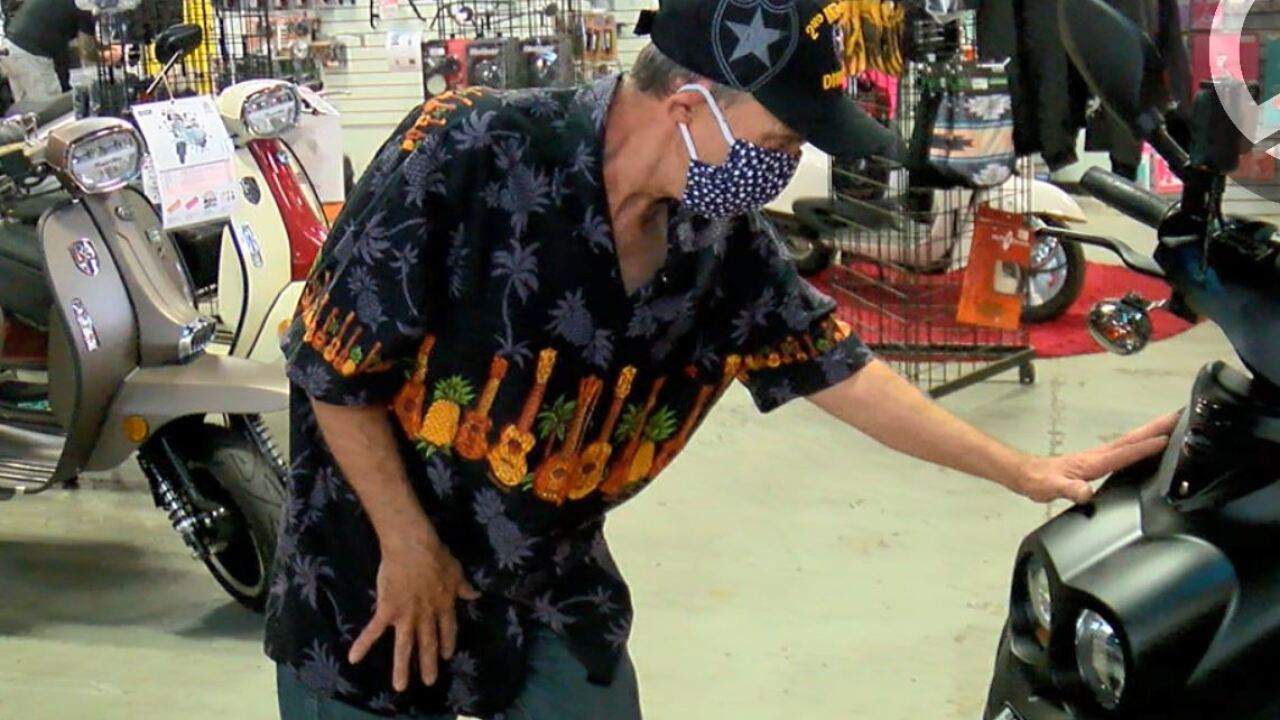 DENVER -- Some stories we tell really strike a chord, and you, our viewers, want to help. A disabled veteran whose scooter had been stolen during the George Floyd protests was one of those stories. We have never seen such a response, which is even more incredible considering a lot of people are hurting financially themselves right now.

The emails and the donations started pouring in to Contact7 Gives, and because of the overwhelming generosity, not only were we able to replace Jeffrey Paulson's scooter, we were able to change his life.

Contact7's Jaclyn Allen first met him last year, when Paulson handed us a check to help an elderly couple buy a scooter.

"So, for Channel7 I'm going to offer this check to you guys and I wish I could do more," he said, handing over a check for $150 to help an elderly couple buy a scooter after they were scammed. "I felt really bad for that couple. They took her for a ride."

What he didn't know then is that he would be reaching out to Contact7 again. Earlier this month, his scooter was stolen during the protests.

"I figured you would air my story, and they would find my scooter," said Paulson. "I would get it back."

His scooter was never found, but Contact7 viewers had a better idea. We told Paulson to meet us at Sportique Scooters in Denver for a surprise: A brand-new Genuine Roughhouse scooter.

"Oh my God, are you serious? That's beautiful," Paulson said. "I don't believe it. It's overwhelming. I'm overwhelmed. Thank you so much."

Sportique Scooters co-owner Adam Baker sold Contact7 Gives the scooter at no cost and plans to soup it up. Contact7 Gives also gave Paulson $1,000 for service and repairs from the shop.

"We're also going to do a performance kit," said Baker. It's not going to be much louder but it's going to be a whole lot more powerful."

Contact7 made sure Paulson has a new lock and an alarm, insurance for a year, and we didn't stop there. Paulson is about to move, so Contact7 is paying for his moving expenses, rent for the rest of the year and garage space to park his scooter.

The fact is we have never seen such generosity from Contact7 viewers. People who donated wanted us to do more than just buy a scooter. So, we did more.

We also gave Paulson a $500 gift card for King Soopers, where he buys his groceries.

"Wow. OK," said Paulson. "No one has ever done something like this for me."

His story touched so many people, especially veterans. Ray Sumner, the commander of the American Legion Post 1879 in Ft. Collins brought a gift from his members.

"Vets reaching out to help other vets is important to us," said Sumner. "We want to give you a lifetime membership in the 2nd Infantry Association, and one-year memberships in the American Legion and Veterans of Foreign Wars in your area. I salute you."

For Paulson, the response means more than just a new ride, it means a new way of life.

"It means a lot. It means mobility. I don't have to count on someone else to get around," he said. "I just want to say thank you. Thank you and I really appreciate it. What can I do for you?"