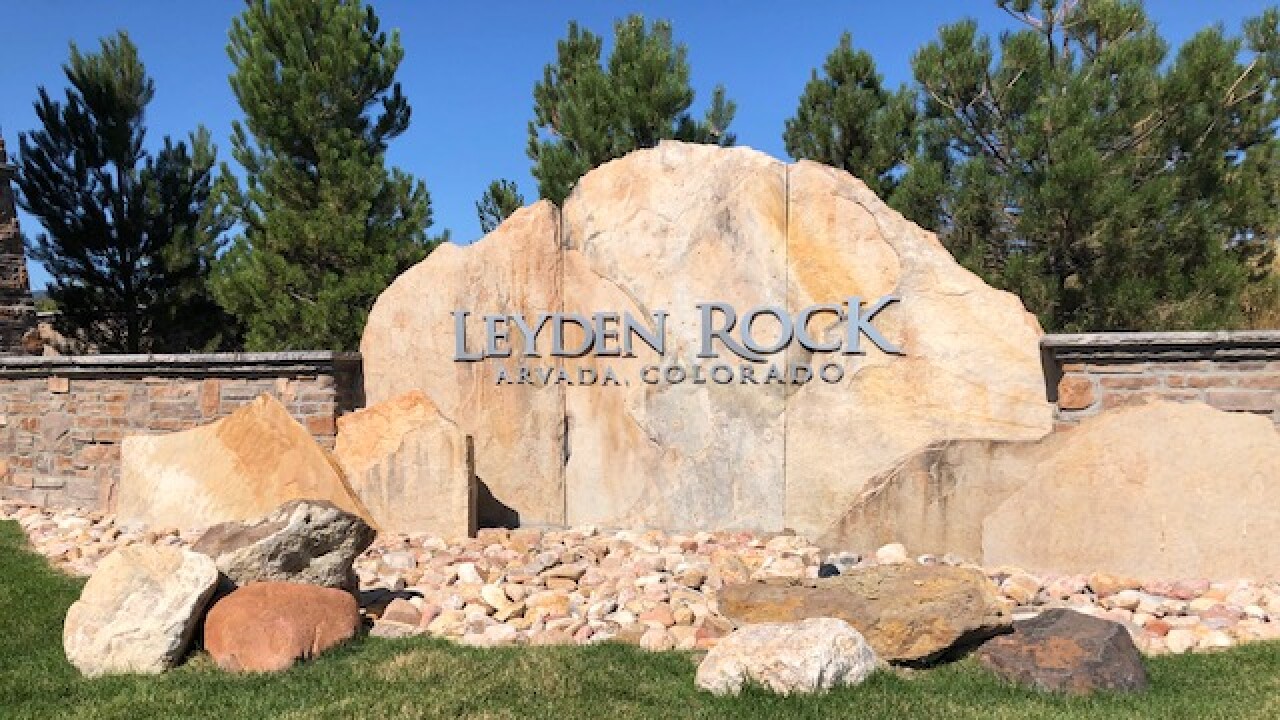 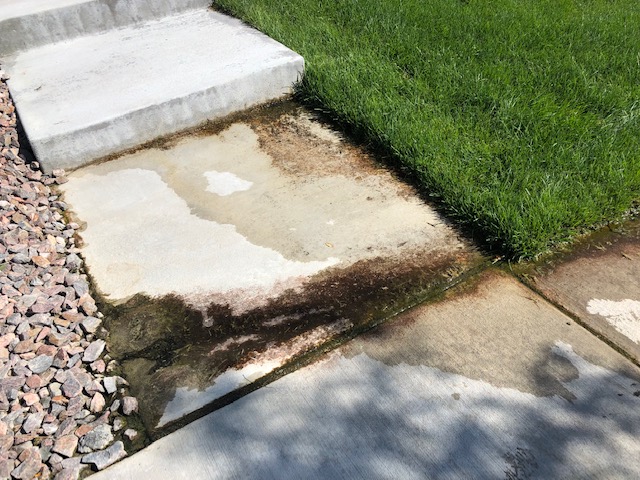 ARVADA, Colo. -- Jordan Sherry speaks in glowing terms about his new house in the Leyden Rock subdivision of Arvada.

"The house is awesome," he said. "We love the house. They did a great job."

But he's not happy, at all, with the drainage.

"It's just a bummer," he said. "There's no reason water should be puddling anywhere."

The first-time homeowner told Contact7 that rain and irrigation water from the homes uphill flows down into his back yard and is trapped by his single story home, which extends deeper into his lot than the two-story homes do on the lots next door.

"I'm the first roadblock," he said, "so the water then comes alongside my house, (via a swale.)"

The water then begins "ponding" in the crushed rock where the swale butts up against sidewalk.

Instead of draining out onto the street, Mr. Sherry said the water flows from the swale downhill on the sidewalk itself.

Constant moisture is contributing to algae growth on parts of the sidewalk.

Some of his neighbors are experiencing the same thing. They said the problem is especially bad in the winter time, when the water freezes.

One neighbor, who lives across the street, said she's fallen on the ice.

Mr. Sherry said he's concerned about liability should someone fall on the sidewalk in front of his house. He said he's contacted the homebuilder, Lennar, numerous times, but has gotten nowhere.

"They're bigger than us and can kind of push us around," he said. "I just feel they should be held responsible for finishing the job."

Contact7 reached out to Lennar, which sent a statement saying: “Lennar purchased finished homesites from the community developer. All homesite drainage plans are designed by third-party engineers and approved and inspected by local agencies prior to the home’s completion. Lennar will inspect Mr. Sherry’s homesite to ensure the homesite is draining as engineered, inspected and designed.”

Contact7 also reached out to the City of Arvada, which did not respond to our request for comment.

In an email sent to a homeowner, obtained by Contact7, Arvada's Civil Engineer called the drainage issue a "violation of city code."

After getting several complaints about concrete scaling, related to drainage issues, Robin Brown told George Hammond of Lennar Homes that the issue was less about the pre-construction condition of the lot and more about the concentration of flows.

"By constructing the structures and other impermeable surfaces on each of the lots, Lennar Homes has created a concentration of drainage. This drainage has been observed to pond and flood adjacent lots, which violates City code," she wrote. "During freezing conditions, this ponding and flooding causes a slip and fall safety hazard to residents of the City of Arvada. It is the responsibility of Lennar Homes to provide adequate drainage and ensure the concentrated flow, created by the increased impermeable surface area on the lot, is conveyed to the street curb and gutter system and does not flow down the sidewalk. In short, Lennar Homes is responsible for providing mitigation measures to prevent ponding and flooding of the properties and drainage flow down the sidewalk."

In a subsequent email, Brown recommended that Lennar install chase drains to help mitigate the issue.

"In our opinion, the areas that have the most severe drainage issues that require chase drains are those where two conditions occur: (1) drainage for the entire lot is routed to the front of the lot, and (2) a hillside, swale, or another lot drains to the lot," she wrote.

"I am not a litigious guy," he said. "The last thing I want to do is be in court. I just am a true believer in people taking responsibility for their actions."