The business license for Gordon Funeral is expired 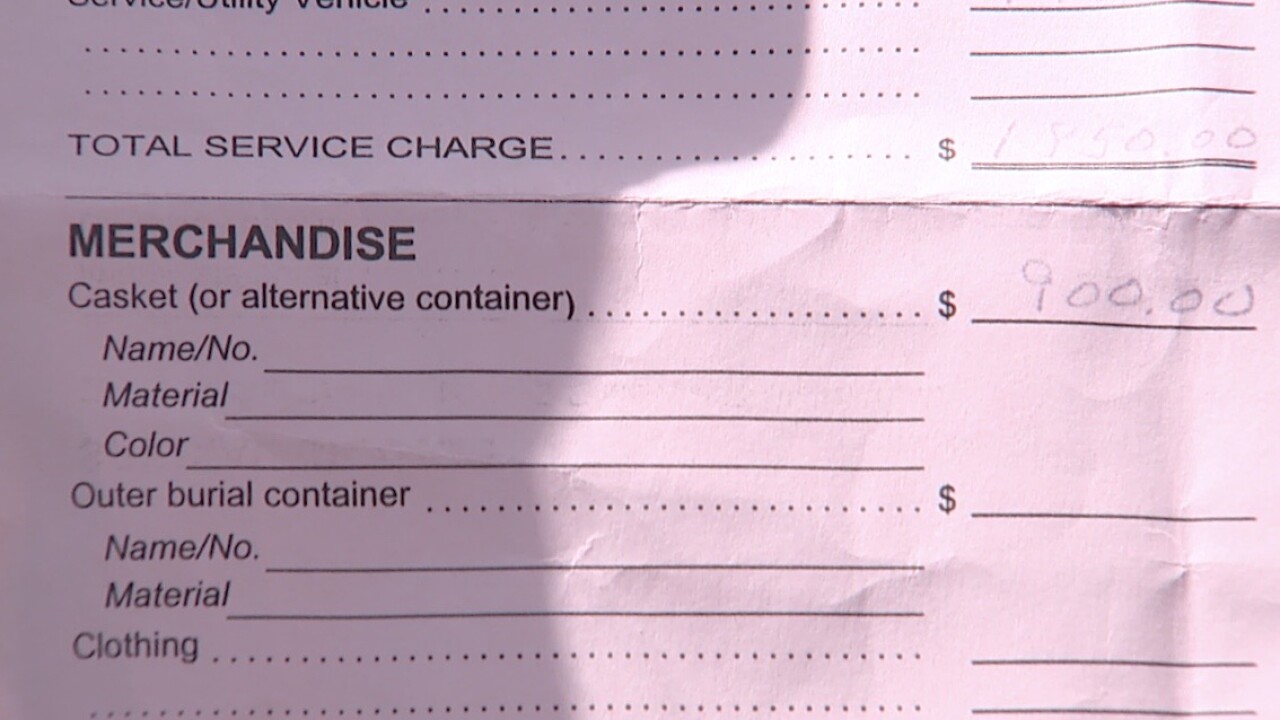 LITTLETON, Colo. -- Everything was supposed to be taken care of when Gerti Beagle passed away. She handed all the paperwork to her daughter back in 2007 with information about her wishes and prepaid funeral services.

With her health failing, nurses called her daughter, Cindy Cinocco, and that's when Cinocco pulled out that paperwork again. She called Gordon Funeral & Cremation Services but the number was disconnected.

"So I was a little shocked, very upset when we found out that the place didn’t exist anymore," said Cinocco.

Her mother passed away a few days later and Cinocco was left wondering how she was going to come up with the money to bury her. The contract with Gordon Funeral & Cremation Services shows her mom spent $6,300 on a burial plot and casket.

When Cinocco realized the phone number was disconnected, she called Littleton Cemetery where the plot was supposed to be.

"Littleton Cemetery has no record of it whatsoever. I was pretty upset that day when I called and found all this out, so I mean I just kind of scrambled," said Cinocco.

Contact7 started looking into Gordon Funeral & Cremation Services after a tip back in February. Another viewer, Donna Lucero, reached out with a similar story. She also tried to call the funeral service provider but the phone number was disconnected.

Lucero pre-paid for a cremation and she lost $937. The Colorado Department of Regulatory Agencies (CDRA) Division of Insurance told Denver7 their investigation into Lucero's funeral home provider is ongoing.

After she shared her story, another funeral home offered to provide their services for free.

Contact7 discovered the state license for Gordon Funeral & Cremation Services expired in November 2019. Our team also made several attempts to reach the owner and stopped by the home where he operated his business from, but he no longer lives there.

"So this has happened before so I know it has probably happened to other people and they just haven’t come forward or they don’t know, they won’t know until the time comes just like us," said Cinocco.

The CDRA Division of Insurance says families who find themselves in the same situation can file a complaint with them by calling (303) 894-7490, emailing them or visiting their complaint page. If they believe they've been victims of theft, you are asked to contact your local law enforcement agency to file a report with them as well.

When purchasing a preneed funeral contract with cash, a spokesperson said, the funds should be placed in a trust. The consumer should then ask the funeral director for the name of the trustee. The licensed preneed contract seller can also sell preneed funeral contracts by a life insurance policy. Lastly, if the funeral home is not a licensed preneed contract seller but the consumer is asked to pay in advance, they should ask where the money will be placed; ask about what happens in the event they choose to cancel the services and obtain a receipt for any monies paid.