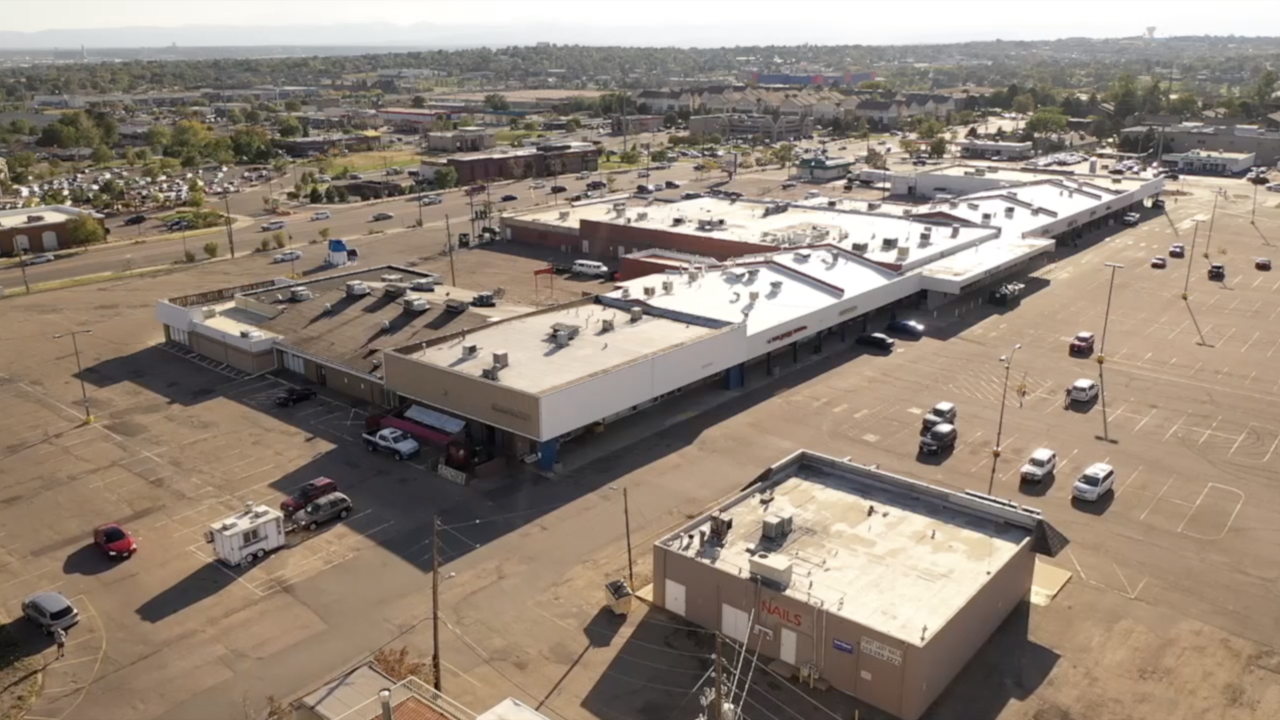 Copyright 2020 Scripps Media, Inc. All rights reserved. This material may not be published, broadcast, rewritten, or redistributed.
Denver7
What you see at the oldest shopping center in Thornton is an eyesore. What you can't see is contamination seeping underneath, affecting the soil and the groundwater. Neighbors fighting 15 years for a clean-up reached out to Contact Denver7's Jaclyn Allen to investigate.

THORNTON, Colo. -- What you see at the oldest shopping center in Thornton is an eyesore. What you can't see is contamination seeping underneath, affecting the soil and the groundwater. Neighbors fighting 15 years for a clean-up reached out to Contact Denver7's Jaclyn Allen to investigate.

In the shadow of downtown Denver, a shopping center -- in the shadows. The contamination that lies beneath the Thornton Shopping Center has left the property tainted and neighbors banding together for action.

Digging is what Eleanor Burns does: for vegetables in her backyard garden and for answers about the soil those vegetables are in.

"Is it in the water that's being soaked up by the vegetables? Is it in the soil that the kids are playing in?" Burns asked.

A half-mile from her home, at the corner of 88th and Washington, she and her neighbor Kathy Henson walk around Thornton's oldest shopping center.

"There's roof damage. There's water damage," said Henson, pointing to one of multiple buildings on the 16-acre property. "That building is closed and can't be torn down because of asbestos."

She points out broken windows, a dumpster that has been on the property for weeks and tape over an electrical outlet in the parking lot.

"To call it a band-aid is an insult to band-aids," said Henson. "This is a health and safety crisis."

Henson said the property is not just run-down, it's dangerous. It is what you can't see that worries them most.

CDPHE documents show that the solvents spread southeast and now "contaminate soil and groundwater" in the nearby neighborhood.

Records show the state has been trying to get the property owner, Jay Brown, to clean up the environmental mess for the last 15 years.

Governor Jared Polis is even getting involved with a letter to Brown stating, "You are the responsible party for... cleaning up these toxic chemicals."

So we reached out to Brown, who lives near Chicago. He refused to speak to us, but in an email stated that he has spent "hundreds of thousands of dollars" to begin clean-up, but the property "has drained available resources and put me deep in debt."

But neighbors are tired of excuses.

"The property owner at Thornton Shopping Center is a slumlord," said Henson, who came together with a group of residents to start a Change.org petition with hundreds of signatures, demanding action from the City of Thornton.

John Cody, the director of economic development for the City of Thornton, said that the city has been trying to work with Brown for years to sell the property for redevelopment. Last year, after the extent of the contamination was determined, a deal fell through, Cody said, because Brown wanted too much money considering the level of clean-up needed.

Several years ago, Cody said, the city had to actually create commercial property maintenance code, in part, to address issues at the Thornton Shopping Center.

One inspection this year lists more than a hundred violations. Now, the City of Thornton is taking Brown to court, in an attempt to enact fines for those violations.

"We have spent a lot of time, staff resources and money," said Cody. "It's not the kind of thing that happens overnight. This is private property."

Meanwhile, the city is also moving forward with more aggressive action, setting aside $7 million to pay for clean-up, but first they want the land.

"We will, of course, speak with the property owner about seeing if we can reach an amicable price on the property," said Cody. "If not, we will pursue other options up to and including the possibility of eminent domain."

Some business owners at the shopping center are worried that if they are forced to move, they will have no place to go.

"The sadness is that we're going to lose a building of businesses we could have had for many years to come," said Sharon Bateman, who owns Aurora Appliances and stores used appliances in one of the units. "I remember when the Santa Shop used to be here. All those memories will be gone."

But neighbors have been applying so much pressure on the city, there is a city web page that gives updates on the status of the shopping center.

"Our job as residents is to keep the pressure on," said Burns. "It shouldn't take 15 years to hold somebody responsible for a derelict building."