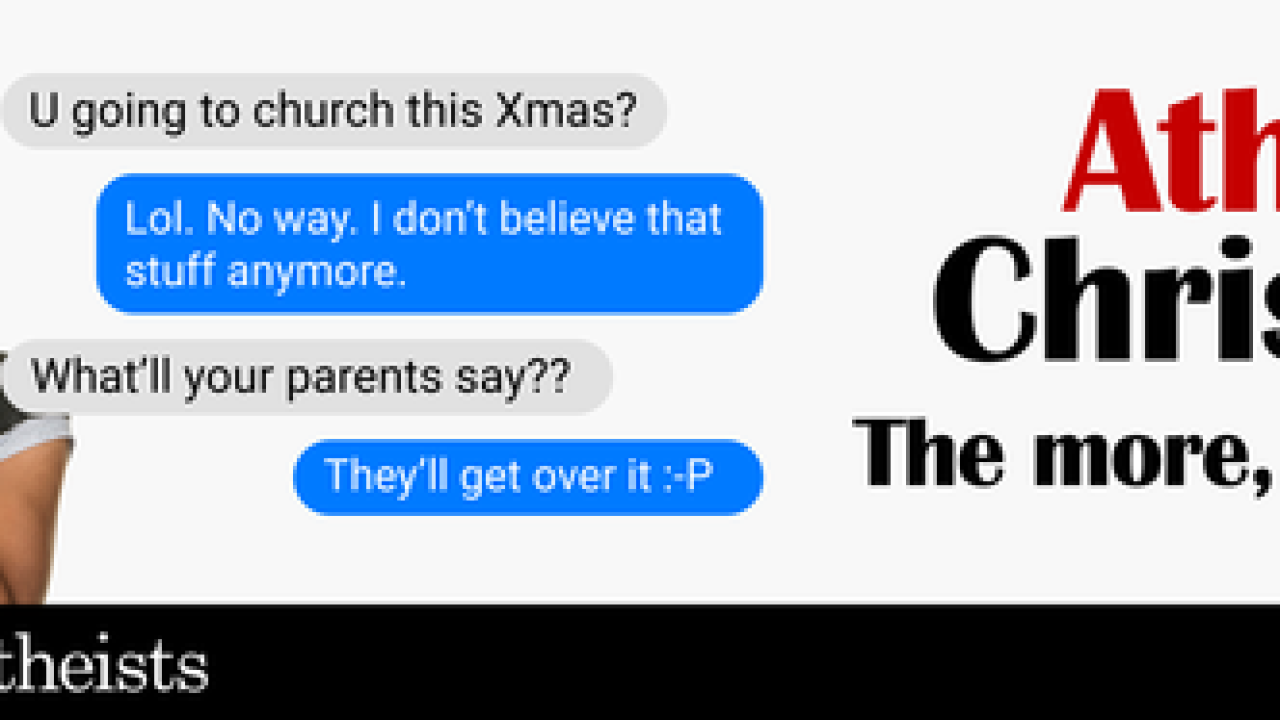 COLORADO SPRINGS, Colo. – An atheist group is keeping a peculiar holiday tradition alive with a billboard that’s encouraging drivers to go ahead and skip church this Christmas.

American Atheists, a nonprofit activist organization “dedicated to defending the civil liberties of atheists and advocating for the complete separation of church and state,” is responsible for the billboard, located on Interstate 25 past Venetucci Boulevard.

The billboard features a mother looking over her daughter’s shoulder as she reads a text from a friend who asks her if she’s going to church this Christmas. Her response? “Lol. No way. I don’t believe that stuff anymore.”

This isn’t the only design American Atheists is using this year.

Other cities across the nation are getting another billboard that puts a political spin on the holiday by modifying President-Elect Donald Trump’s famous campaign slogan: “MAKE CHRISTMAS GREAT AGAIN,” followed by “Skip Church!”

The billboards will be up in Colorado Springs and seven other cities throughout the month of December.

“It is important for people to know religion has nothing to do with being a good person, and that being open and honest about what you believe—and don’t believe—is the best gift you can give this holiday season,” said David Silverman, president of American Atheists, in a statement. “More and more Americans are leaving religion, but we still have work to do when it comes to fighting the stigma many atheists face.”

The atheist organization cities a recent survey from the Public Religion Research Institute, which shows approximately a quarter of Americans and almost 40 percent of young people are atheist or non-religious.

“The only way to remove the stigma is to show our friends and family that we are the same kind, loving and compassionate people they’ve always known us to be,” said Nick Fish, national program director for American Atheists. “This billboard campaign will be a starting point for that conversation in communities where atheists don’t always have a voice.”

This isn't the first time the organization has chosen Colorado Springs to deliver their secular message.

In 2015, a billboard went up which featured a mischievous-looking Santa Claus and the words "Go ahead and skip church! Just be good for goodness' sakes. Happy Holidays!"

A vandal tagged the billboard with the words "God's Not Dead."

"I would have hoped that we would have been able to come together as friends, neighbors, brothers and sisters but some people still want to just spread intolerance," Colorado Regional Director of American Atheists Randy Gotovich told our ABC affiliate in Colorado Springs, KRDO-TV at the time.

American Atheists was founded by Madelyn Murray O’Hair in 1963. The organization, which claims to have approximately 2,200 members, is based in Cranford, New Jersey.