Prosecutors and police discuss new details in Chris Watts case, what comes next for him and families 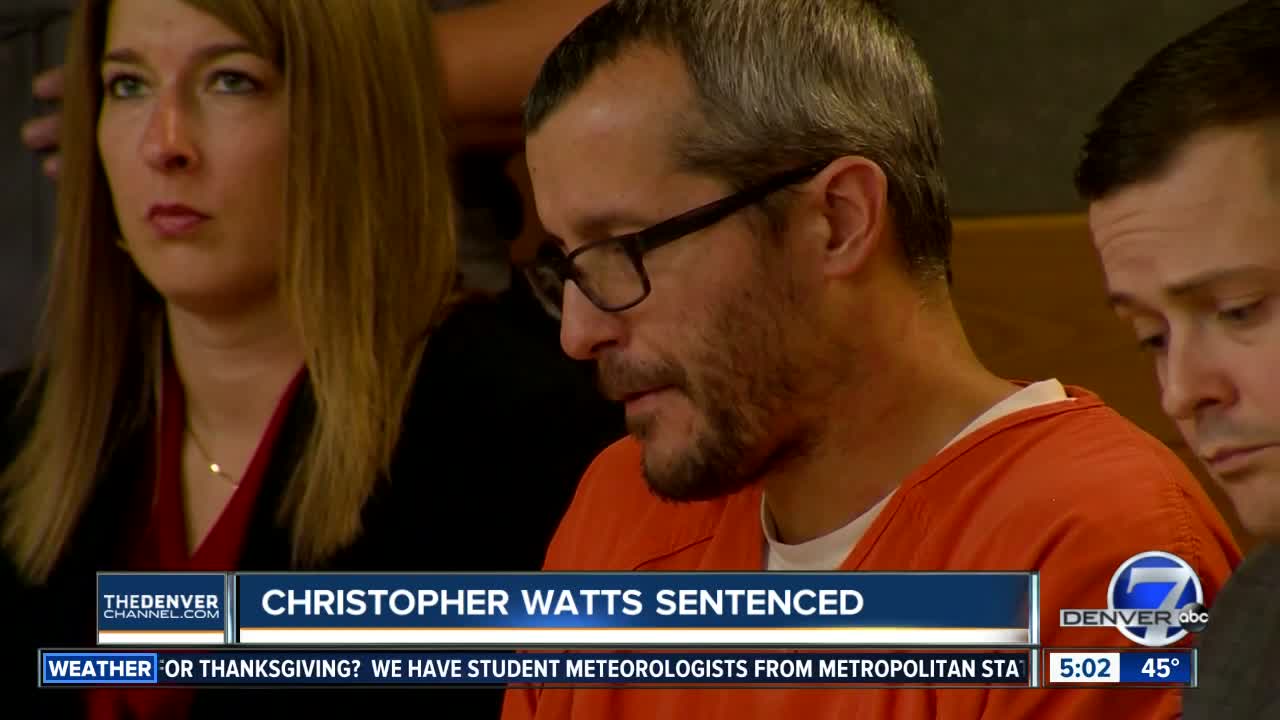 Chris Watts was sentenced Monday to three consecutive terms of life in prison without the possibility of parole for killing his pregnant wife Shanann and their two young daughters, Bella and Celeste, after an emotional hearing that brought to an end a saga that has roiled Colorado and the nation. 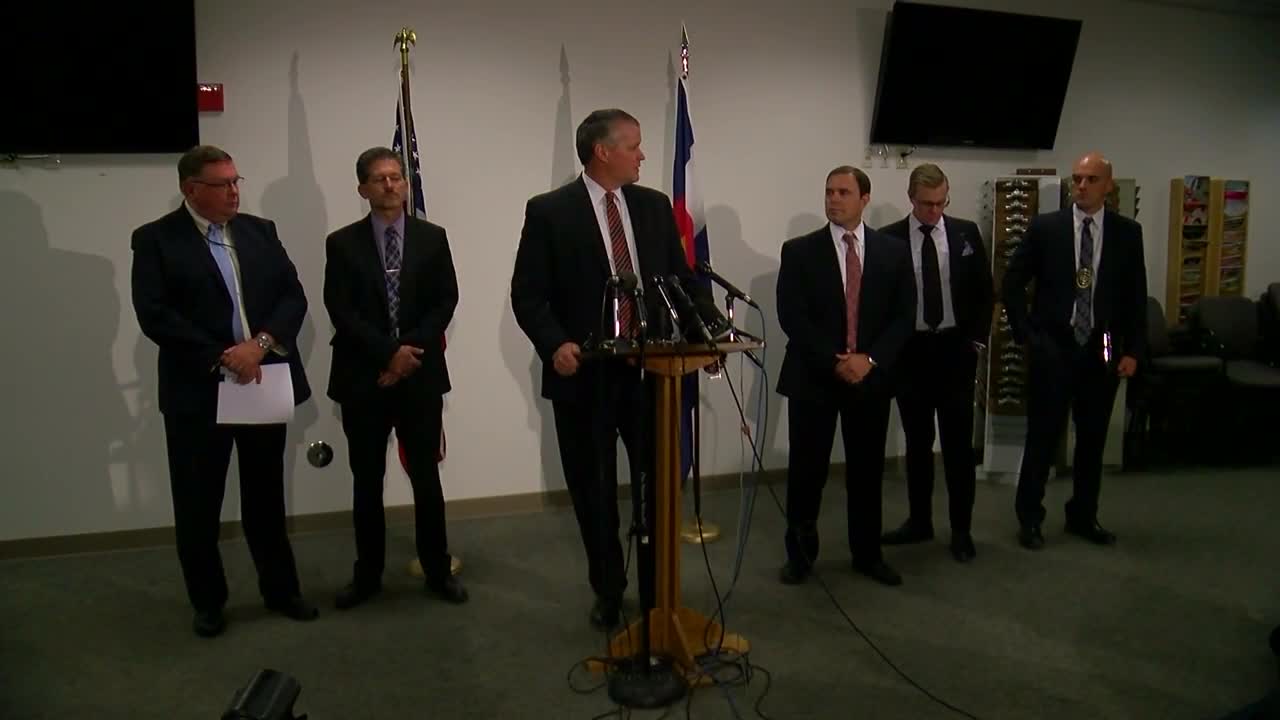 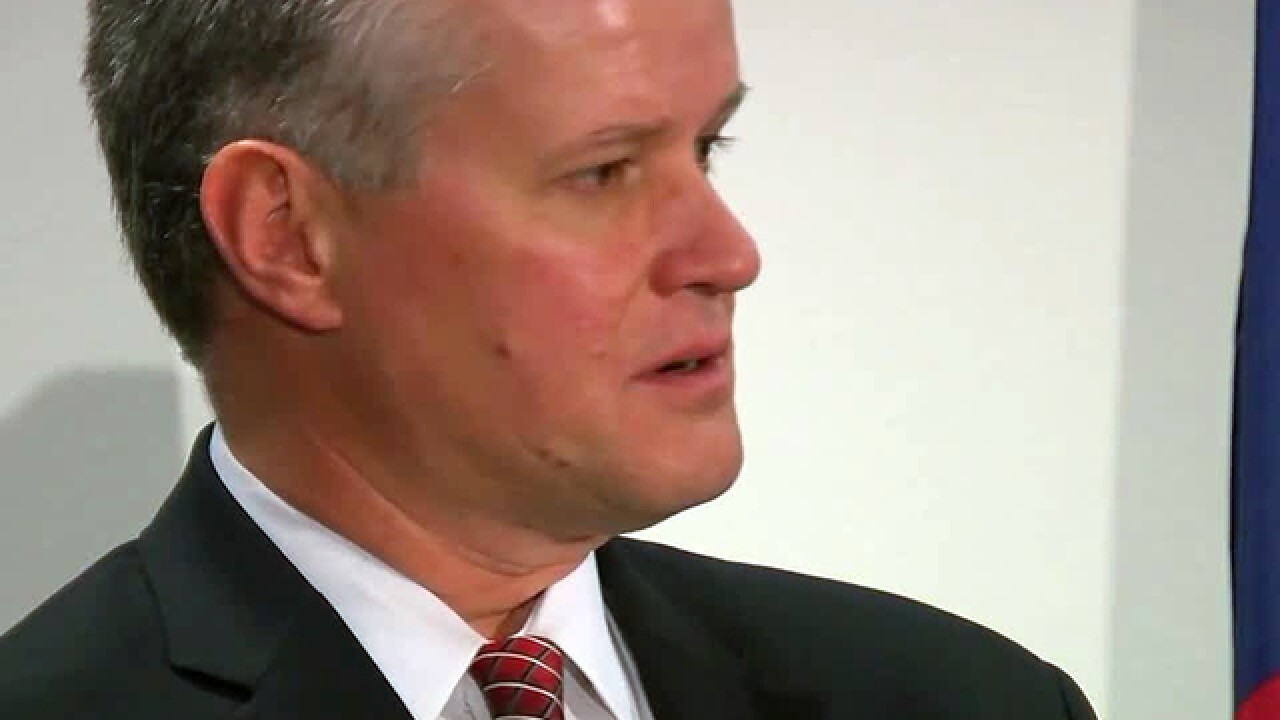 GREELEY, Colo. – Weld County’s top prosecutors and Frederick police held a news conference Monday afternoon to brief the media on more details of the Chris Watts case after he was sentenced earlier in the day to several life terms in prison without the possibility of parole in the deaths of his pregnant wife and young daughters.

Flanked by fellow prosecutors, Frederick Police Department representatives and the county coroner, 19th Judicial District Attorney Michael Rourke started the news conference by thanking the law enforcement agencies involved in the case as well as the family of Shanann Watts for “serving justice” in her name and those of her two daughters and unborn child.

Much of what Rourke and his deputy district attorney, Steve Wrenn, discussed at the news conference centered on new details that had not been released about the case, the autopsy reports for the three which were released after the news conference, and what will happen next for Chris Watts as he makes his way to prison for the rest of his life.

Rourke said that he doesn’t believe Watts will ever truthfully answer as to why he killed his family though his parents pleaded with him during sentencing Monday to come clean and atone in the future.

He said that Watts’ attorneys approached prosecutors first about the plea deal and that he did not accept until after speaking with Shanann’s family, the Rzuceks, in North Carolina beforehand. The Rzuceks addressed Watts and the case in court Monday.

“That was a conversation I was only going to have with them face to face,” Rourke said.

“Sandra (Shanann’s mother) leaned across the table and said, ‘Why haven’t you done that?’” Rourke said of accepting the plea deal. “That helped the family get some needed closure.”

Rourke said he also spoke with Judge Marcelo Kopcow Sunday ahead of the sentencing hearing to give him more information, including the unredacted affidavit, so that the court could impose a “just and fair sentence under the circumstances.”

Rourke unveiled new details about the case that had not been public before Monday.

Rourke said that while he had no evidence of much pre-planning of the killings on Watts’ behalf, that he didn’t believe the killings were spur-of-the-moment.

He alluded to what he said in court Monday about how long it took to strangle a person, as Watts did to Shanann. In court Monday, Rourke also unveiled that Watts had smothered Bella and Celeste.

“That demonstrates an incredible intent to cause someone’s death. He did that three times. To say this was anything other than an intentional, deliberate killing is inaccurate, to say the least,” Rourke said. “Because of the fantastic work done by the medical examiner in giving information in a responsible, medically-accurate way, we know that’s not what happened.”

He said Watts told “bald-faced lies” to the media, to investigators, and to most everyone else and “pulled the wool over the eyes” of anyone who believed Watts.

“[Watts] stood there and said he hoped his children and his wife were safe for the better part of two days … knowing exactly where they were.”

Rourke said investigators found through Watts’ Google searches, cell phone searches, and trips he made and planned while Shanann and her daughters were visiting North Carolina that Watts “found a new love interest.” That included a trip to Great Sand Dunes National Park, a planned vacation in the mountains and dates at Denver-area restaurants. Rourke said Shanann had received credit card notifications for some of the transactions while she was away.

“For whatever reason in his mind, divorce wasn’t an option,” Rourke said. “I can’t speak to why anyone would take the steps he did … outside of normal financial and marital stress, we couldn’t find a significant enough moment to annihilate your family like he did.”

Rourke said the woman with whom Watts was having an affair “spoke to investigators on her own volition” but had deleted all the information off her phone that showed her connections to Watch before investigators were able to talk to her. Rourke said that “hampered” the investigation. But he said she was interviewed several times, was mostly forthcoming, and that he had “no reason” to believe she had any involvement in or prior knowledge of the murders. The woman spoke to the Denver Post last week.

Rourke thanked Shanann’s friend and neighbor who first alerted police that Shanann was missing and allowed law enforcement to get ahead of Watts in the case, calling her “instrumental” to catching him.

Rourke said investigators were able to track Watts’ movements on the morning of the killings because of a GPS tracker hooked up to his work truck, which he used to get around that morning and to transport his wife and daughters’ bodies. He also said that sheets missing from the couple’s bed that were found at the site the bodies were dumped helped link Watts to the murders.

Some of that information was relayed to investigators who were in the midst of questioning Watts prior to his arrest, Wrenn said.

“They confronted him with that and that was ultimately when he changed direction with his story dramatically,” Wrenn said. “he asked to speak to his father briefly, at which point he said he was willing to tell them what happened. That is when things changed, and he admitted to dumping the bodies in oil tanks.”

What comes next for Watts, families?

Watts will go next to a regional diagnostic center in Denver for an evaluation and it will then be up to the Colorado Department of Corrections to decide if Watts will be house in Colorado or moved out of state, Rourke said. Rourke said the DOC was “an exceedingly professional organization that will see to his safety and will place him in a prison where they feel is most appropriate for him.”

Rourke also said that the Rzucek family has kept investigators and prosecutors going throughout the case and called it “an honor” to work with them.

He said that he would be seeking restitution for the Rzuceks from what assets Chris Watts does have and said there would likely be ongoing costs to pay for counseling and therapy costs for Shanann’s family, in addition to the burials and funerals.

The family also filed a civil lawsuit Monday to try and keep Chris Watts from benefiting from the story or the case in the future, the family’s attorney and the court confirmed Friday afternoon.

"He cannot profit from any inheritance that he would normally receive from Shanann," said attorney Steven Lambert. "On top of that, any proceed that he might derive from a sale of a book, he would not be able to keep any of that. Also any assets that he might receive once we get a judgment from the court, we can file any liens and get things like that on any assets from here into the future."

Rourke acknowledged there would still be a long road ahead for the family, but he said their work with him and police has been second-to-none.

“The thing that I will tell you gets us up and gets us moving every day is that family over there,” Rourke said of the Rzuceks. “They were great to work with under awful circumstances. … It’s been tough. Thank you to Frank, Sandy and Frankie for all you have participated in, all you’ve been subjected to. It’s been an honor.”