Copyright 2020 Scripps Media, Inc. All rights reserved. This material may not be published, broadcast, rewritten, or redistributed.
Denver7
Camping is making a comeback in Colorado, just in time for Memorial Day weekend. 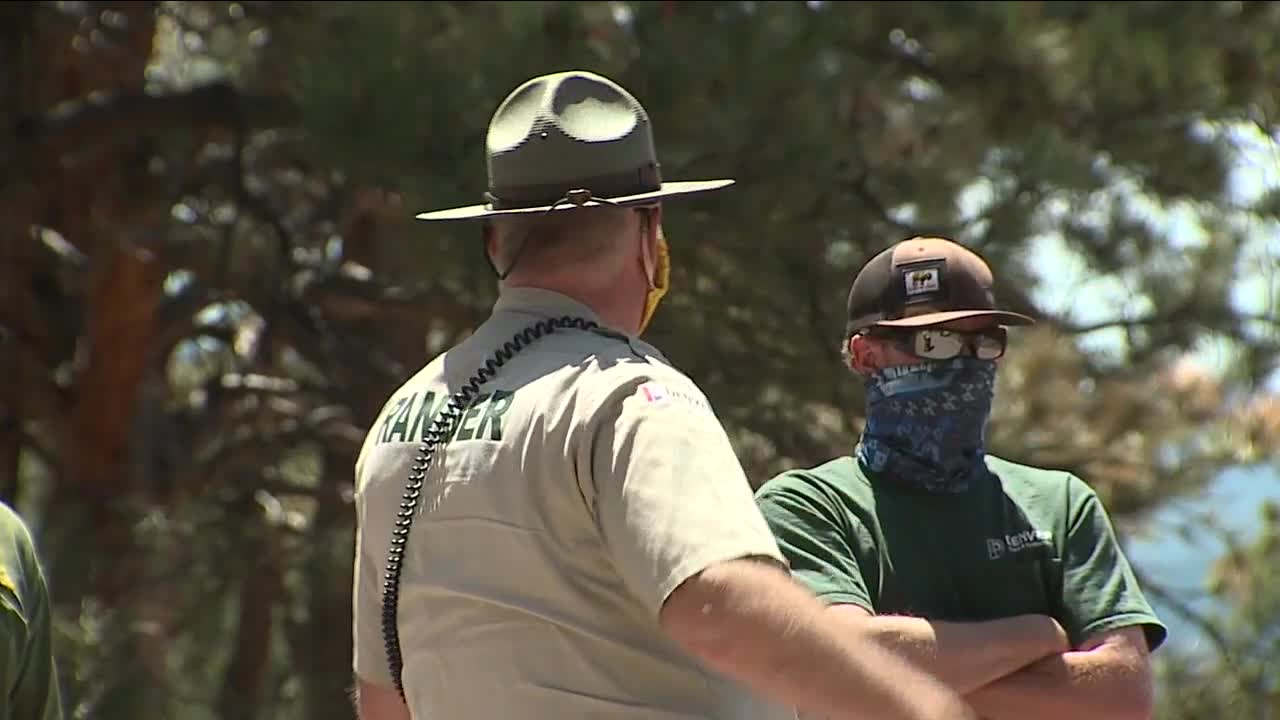 "We got an inflatable mattress right here,” said Nathan Adds. “An Academy grill, a cooler.”

Adds and his friend, Cole Glasson, just arrived in Colorado this week.

The pair in their early 20s represents an inevitable flood of tourists about to enter Colorado as the summer season officially kicks off this Memorial Day weekend.

Glasson’s parents own a home in Winter Park, and as stay-at-home orders are lifted nationwide, folks just like them are itching to get out.

“It’s nice to get out and enjoy God’s creation,” Glasson said.

While campers from throughout the state and across the nation make their way to the Rocky Mountains, crews are preparing campgrounds for a unique season.

“We’re actually up here locating where we’re going to put some ‘no parking’ signs in,” said Bob Finch, the director of natural resources and mountain parks for the City of Denver Parks & Recreation department.

Finch says campers should take note: it’ll be a different season, including more distance between each campsite at sanctioned campgrounds.

“We’re looking at reducing the number of sites so that we are in compliance with some of those social distancing guidelines,” Finch said.

Colorado Parks and Wildlife took the unprecedented step of closing down camping at state parks on March 26 because of the pandemic. They just reopened state parks like Chatfield and Cherry Creek on May 12, though the swim beach at Cherry Creek has been closed.

“Camping is a great way for me to get out and do stuff with my dog,” said Kate from Wheat Ridge. “And we do a lot of hiking. I’m so glad to be back.”

Kate booked her spot at Chatfield months ago. If you don’t already have a reservation at a campground, it might be tough to get one at this point.

Demand is already causing some counties and towns to turn campers away. JeffCo Open Space officials recently announced its campgrounds are sold out until further notice, due to unprecedented demand.

Existing reservations are being honored.

And Gov. Jared Polis says his biggest concern is not the camping, but the touch points along the way like gas stations and restaurants.

Chris Verikas is one of those restaurant owners who is torn.

“We, like everyone else in this town, rely on tourism,” said Verikas, owner of Mountain Prime Steak House in Idaho Springs. He’s anxious to open his doors, but also guarded about crowds.

“We’re trying to keep ourselves safe, my staff safe and anybody we come into contact with safe,” he said. “We don’t want to be like Wisconsin where people are shoulder-to-shoulder. That scares me.”

Just this week, Boulder officials released video showing people packed along the banks with little regard for social distancing and later closed down a stretch of the creek.

Opinions are certainly mixed on best practices for people to continue social distancing measures while still enjoying the great outdoors.

“Some people seem a little frustrated if you’re getting too close to them or whatever,” said Bailey Vanetten. “That’s part of the thing.”

“It was slammed,” said mountain biker Charlie Nicholson of the trails mid-week. “It’s kind of tricky to stay a good distance away from people.”

Officials like Finch certainly want you to come fish, camp, hike and enjoy. But, they say to be prepared because not all sites are open just yet.

“We hope, if we get approval, that we may be able to open the Chief Hosa campground in June,” Finch said. Chief Hosa is one of the closest campgrounds to metro Denver and the oldest in the Denver parks system.

The other option campers have in Colorado is finding their own spot off the beaten path. The U.S. Forest Service allows dispersed camping in many areas of the forest as long as you camp on Forest Service property and not private property.

“You can’t really shut down the great outdoors,” Glasson said.

He and Adds are planning to set up camp wherever life takes them.

“I don’t really have any expectations, we’re sort of just roughing it,” Glasson said. “We’re just trying to be as safe as possible.”

If the mountains are calling, officials say by all means answer the call.

“But keep in mind, it’s crowded,” Finch said. “We’re seeing more vehicles than we’ve ever seen. There is nothing about this that is normal. We’re just trying to manage capacity”

“We’re all doing our best to practice safe guidelines, whatever that looks like,” Glasson said.

“I don’t blame people at all for needing to get out,” Verikas said. “Everything seems to indicate if you’re outside – it’s that much safer than being stuck indoors.”